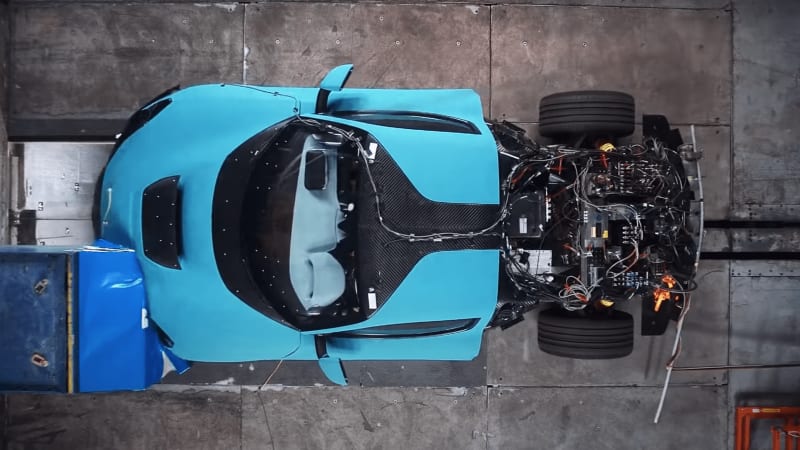 Rimac is leveraging the power of software-based simulations to fine-tune the C_Two, but there is no substitute for real-world testing. It released a video that explains how its engineers are ensuring the electric hypercar keeps its occupants safe in an accident, and the work they’re doing to make it street-legal all over the world.

“Simulation of [the metal parts] are at a high level [of accuracy], but composites are an area that’s not very well known. The orientation of each composite part is important, because the materials behave differently in different directions, so it’s not so easy to simulate. We can get some overview of how a part will perform, and after the crash test I can immediately see how close my simulations were,” explained senior CAE engineer Martin Mikulčić.

After strapping in the dummies, Rimac launched the first prototype into a deformable barrier with a 40% offset at 25 mph. It then crashed a second car into the same obstacle at 35 mph. Both tests allowed the company to analyze a wide selection of parameters, including how the seat belts hold up and whether the pedals injure the driver. Petar Marjanović, the Croatian brand’s trim engineer, proudly pointed out the C_Two passed both tests.

Although the two cars look completely totaled, they performed exactly the way Rimac wanted them to. The front end was designed to absorb energy before it reaches the passenger compartment; it’s a giant crumple zone. Marjanović reported no cracks in the central carbon fiber tub, and even the footwells remained solid.

13 prototypes and five pre-series cars will be built in total, and 11 of these will be destroyed. Stuffing prototypes into walls is a horrendously expensive process, but it’s the only way to ensure buyers can register and drive the 1,914-horsepower C_Two regardless of where they live. Rimac admirably chose to certify the car to U.S. safety regulations so that American customers can own and register one normally, rather than apply for a special Show or Display exemption, for example. This painstaking attention to details also illustrates the firm’s commitment to taking on bigger rivals.

Rimac will put the final touches on the C_Two in the coming months, and production is scheduled to begin in 2021. Pricing starts at about $2 million before options enter the equation, and Rimac confirmed to Autoblog that there are still build slots available. It’ll be a rare sight, though it’ll be a lot more common than the Concept_One, which was limited to eight examples.

Correction: A previous version of this story stated that the C_Two was sold out. It has not yet sold out, though the company has not said how many more examples it will sell.