Truex, driver of the No. 19 Toyota for Joe Gibbs Racing, drew the pole in a random draw on Monday evening. He’ll be joined on the front row for the race by Hendrick Motorsports driver Alex Bowman.

Ryan Blaney will start third, followed by Justin Haley. Haley qualified for the All-Star Race thanks to his victory last July at Daytona Int’l Speedway. Kevin Harvick will start fifth in the Stewart-Haas Racing No. 4 Ford.

The NASCAR All-Star Race and the NASCAR Open will feature a number of unique changes specific to the one-day event. The event will utilize the choose rule, which will allow drivers to pick which lane they start in prior to a restart.

The cars will also feature unique paint schemes, with the numbers pushed back alongside the rear fender to allow for more space to promote sponsors. Lastly, the cars will each feature an under glow color underneath, with each participating manufacturer utilizing a different color.

Sixteen drivers have qualified for the All-Star Race, with an additional three to be added from the NASCAR Open and one from the fan vote.

Wednesday’s NASCAR All-Star Race represents the second time the event has been held somewhere other than Charlotte Motor Speedway since it was created in 1984. Atlanta Motor Speedway held the event in 1985. 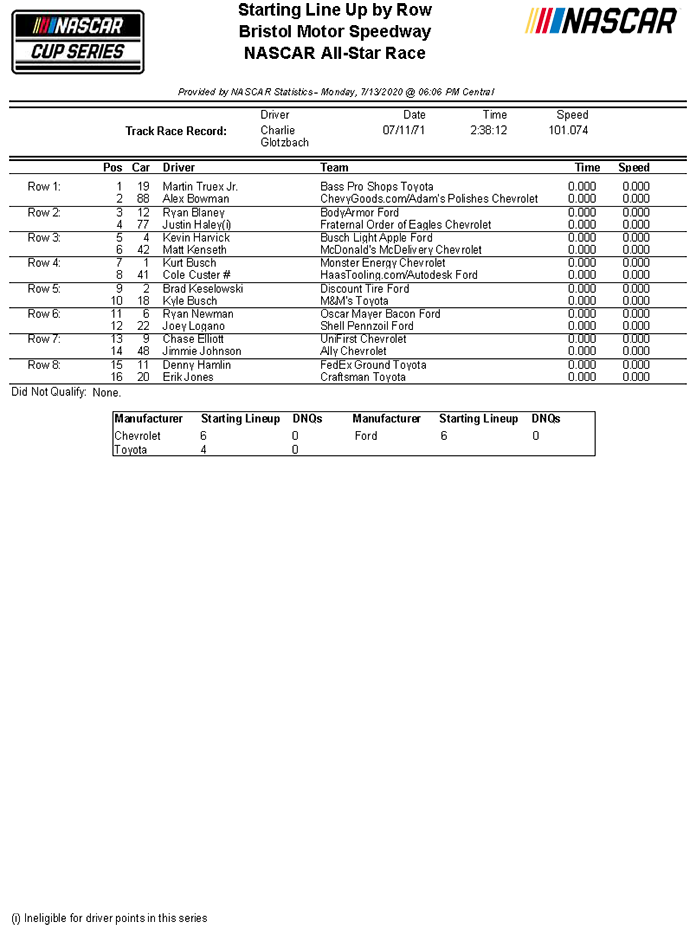