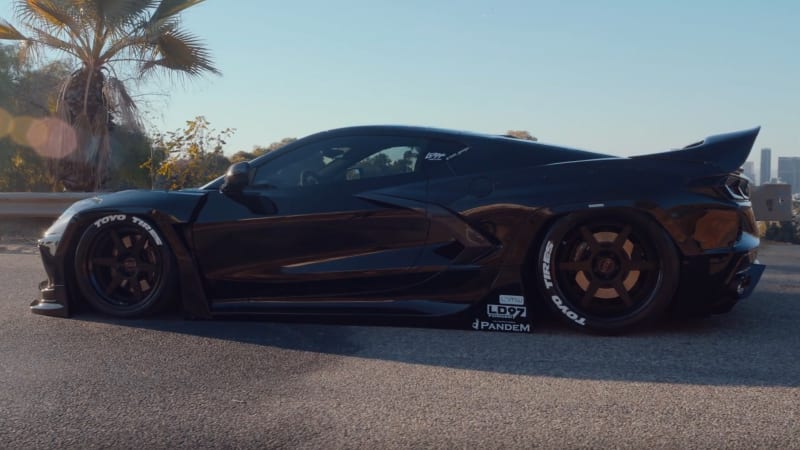 Whether or not you like the Pandem Rocket Bunny C8 (or even understand that string of words) will probably depend on whether you wear your baseball caps flat-brimmed or “dad hat” style. For a certain subset of the enthusiast community, though, there’s nothing cooler than a body — or if you want to get real old, “ground effects” — kit made by the Japanese tuner Rocket Bunny in their trademark “Pandem” wide-body style.

The formula is, first and foremost, to slam the car to the ground. Then comes the widened fenders, side skirts, air dams and spoilers. Notably, the fenders must have exposed fasteners, a touch that traces its roots to Japanese race cars of the late 1960s (and the fact that in Japan, a car whose tires poke past the fender edges automatically fails roadworthiness tests). Massive wheels and tires with minimal sidewall are a must as well.

If the look is familiar, it’s probably because you’ve seen the SEMA Show dotted with hundreds of cars sporting these kits. They span everything from Nissan 240SXes to GT-Rs, Mustangs to Lamborghinis, BMWs to Ferraris. There’s even a kit for the classic Datsun 240Z. In fact, this Corvette would have been part of the Toyo Tires display at this year’s SEMA Show if the event hadn’t been canceled due to the pandemic (no pun intended).

It’s the first one in the world to get the Pandem treatment, but it almost certainly won’t be the last. It gives off a sinister vibe in all black, and the wheel fitment insanely tight. If there are any performance modifications, the owner, who goes by toxic_garages, hasn’t said. To us, it looks like something Bruce Wayne’s alter ego would drive. Is that a reference kids get, or is that the dad hat talking?