It’s impossible to understate the importance of the Lexus LS and the impact it had on the American car market. When the original LS400 debuted in 1990, it changed the entire luxury car segment for the better. After his first drive in 1989, Automobile founder David E. Davis famously wrote, “All you guys from Munich, Stuttgart, and Coventry, call your offices. I’d say the fox is about to find his way into the henhouse.”

First-Generation Lexus LS: A Heavy Dose of the Unexpected

In the late ‘80s, Japanese automakers were best known for well-built economy cars, and pundits questioned whether they could build a credible luxury car. When Toyota introduced its new Lexus luxury brand, the LS400 provided a definitive answer. It was unlike anything American motorists had ever seen, with its subtle (almost too subtle) and vaguely Mercedes-W126-like styling, understated 250-horsepower 4.0-liter V-8 engine, and build quality of a level that few luxury cars had achieved. In place of Detroit’s chrome and stick-on wood or Germany’s austere and functional interiors, the Lexus had a warm, leather-lined cabin where everything looked functional and felt expensive. The LS400 wasn’t the most exciting car to drive, but it exuded an air of dignity, solidity, and sensibility.

Changes for the first-generation cars were minor. In 1993 the LS400 received a host of updates, many in response to dealer and customer requests, including new colors, slight trim changes, and alterations to the steering, suspension, brakes, wheels, and tires to improve driving characteristics. 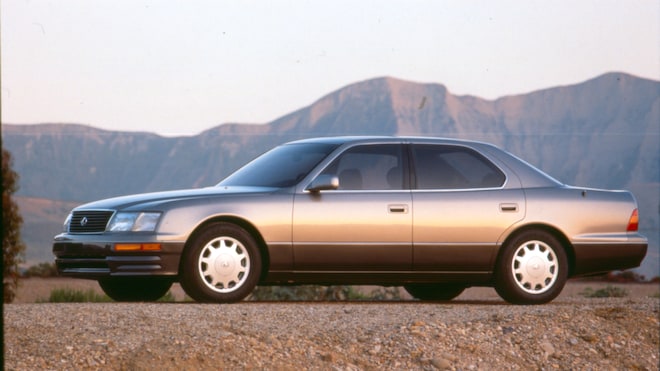 The first redesign of the LS came in 1995, and while the wheelbase was stretched by 1.4 inches—which translated to a 2.6-inch increase in rear-seat legroom—it was difficult to tell the new car from the old one at first glance.

The 1998 Lexus LS400 brought a mid-cycle refresh with updated styling, a new variable valve timing system that brought the V-8’s output to 290 horsepower, and a five-speed automatic in place of the previous four-speed. The LS’s 0-60-mph times dropped by nearly 1.5 seconds into the low-6-second range. New and notable was a GPS navigation system with maps on CD-ROM.

When the all-new third generation LS appeared for the 2001 model year, it had a new name—LS430—which denoted its bigger 4.3-liter engine. The new engine still made the same 290 horsepower, but torque increased from 300 to 320 lb-ft. Styling-wise, the LS retained its basic boxy shape, but the profile bore a closer resemblance to the W140 (1992-99) Mercedes S-Class. Among the notable new features for the LS430 was adaptive cruise control, which used lasers to measure the distance from and speed of cars ahead, and the LexusLink telematics system. The model lineup grew to include a sport-tuned Touring model.

Lexus refreshed the LS for 2004 with minor styling updates, a new six-speed automatic transmission, and radar (instead of laser) for the dynamic cruise control, which worked better in bad weather. 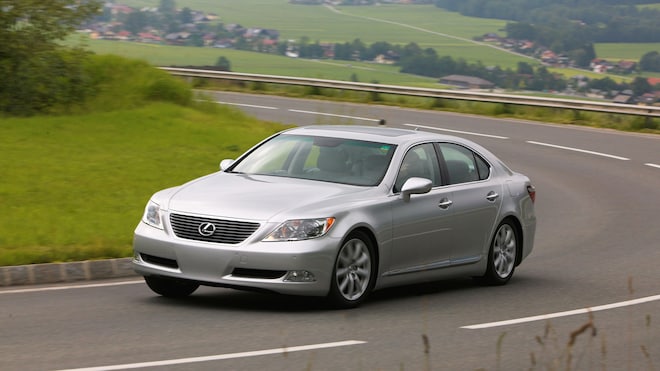 Finally, a New Look for the Lexus LS

By 2006 the LS’s shape hadn’t changed much since the original, which made the 2007 Lexus LS460 a pleasant surprise—it was far more aerodynamic and stylish than the previous LS. The new 4.6-liter V-8 produced 380 horsepower, a significant upgrade. The LS460 was offered in regular and long wheelbase (“L”) models, the latter with an optional “executive” package that featured a reclining rear seat with an ottoman, folding table, and massaging function.

The lineup also included an all-wheel-drive hybrid variant called the LS600h (and LS600hL for long-wheelbase models). The hybrid mated a 5.0-liter V-8 with Toyota’s Hybrid Synergy Drive for a total system output of 438 horsepower. The LS460 added all-wheel-drive as an option for 2009.  Refreshed styling for 2010 came along with a new Sport model that featured a sport-tuned air suspension and Brembo brakes. The LS was facelifted again for 2013, adopting the spindle grille found on other Lexus models. An F-Sport model was also added to the lineup.

The fifth-generation LS arrived on the scene for 2018, with a switch to the TNGA-L (Toyota New Generation Architecture – Luxury) platform also found under the All Stars-winning LC coupe. The car was now known as the LS500, but instead of the 5.0-liter V-8 found in the LC500, the LS uses a twin-turbo 3.4-liter V-6 that delivers 415 horsepower. Lexus returned to offering a single wheelbase length for the LS, though the executive package, with its reclining seats, remained as an option. The hybrid model, now called LS500h, uses a 3.5-liter naturally-aspirated V-6 and the same Multi Stage Hybrid transmission as the LC500h.

Lexus facelifted the LS for 2021, with mild styling changes, better sound insulation, and—most notably—a touch-screen entertainment system, replacing the difficult-to-use touchpad that the LS has had for the last several years.

Toyota introduced the Lexus brand in the United States in 1989, but did not launch it in the home market of Japan until 2006. In the interim, the LS was sold in Japan as the Toyota Celsior.

The 2007 Lexus LS460 was the first production car with an eight-speed automatic transmission and an automated self-parking system.

The Lexus LS has not attracted much collector interest yet, but it really should, especially the first-generation model, which led to a huge shift in the luxury market and the approach to luxury cars taken by both American and European competitors. That said, it’s not the most thrilling car to drive, which certainly limits its appeal.

Fortunately, Lexus cars are exceptionally reliable, despite their complexity. (Matt Farah of The Smoking Tire Podcast bought a second-generation LS with 850,000 miles and took it to one million miles. We drove the car at 950k and it was solid.)

There’s no reason to buy a high-mileage example, though. These cars were popular with retirees who switched from the domestics to Toyotas in the 1980s and ‘90s, so you should be able to find a low mileage example easily, especially if you shop in rust-free retirement states like Florida.

While we can’t see the Lexus LS ever becoming a blue-chip collectible, we imagine that first-generation cars and limited editions (such as the Inspiration Series) are likely to have the best prospects.

Driving the Original LS400 and Other Classic Lexus Models

What does LS in Lexus LS stand for?

Is the Lexus LS a good car?

In terms of luxury and reliability, the LS has no equal—all generations are posh, quiet, and relaxing, and far less troublesome (and cheaper to keep up) than European sedans. However, if you’re looking for a sporty luxury car, the LS might leave you cold—it’s never been a thrilling car to drive.

What is the most luxurious Lexus?

The LS460 and LS500 with the Executive Package is the most luxurious Lexus LS—provided you sit in the back seat, that is. These cars have reclining seats with ottomans and built-in massagers.

Is the Lexus LS expensive to maintain?

Among luxury cars, no, the LS is fairly inexpensive to maintain, though it will still cost more to keep up than a more pedestrian car. The LS’ exceptional build quality and reliability helps to avoid surprise repair bills.

BMW’s 3 Series Gran Limousine is the long-wheelbase version of the company’s 3 Series sedan. ...