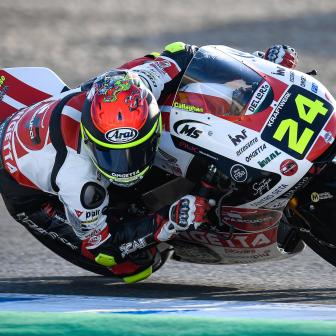 Suzuki was hungry to stay at the forefront of the fight. Rodrigo and Raul Fernandez (Red Bull KTM Ajo) nibbled at the Japanese rider on a few occasions and despite getting by, Suzuki bit straight back at the first opportunity. Meanwhile, Championship leader Arenas was right in the hunt. And so was second in the Championship Ogura, but disaster then struck for the latter. On Lap 8, Jauma Masia (Leopard Racing) took out Ogura at Turn 9 after tucking the front on the inside line.


Source link
2020-07-26
admin
Share
Previous Bugatti Baby II Is the $68,000 Go-Kart Your Kid Will Crash and Leave Outside in the Rain
Next Here’s how you detail a multimillion-dollar Lamborghini Veneno Roadster