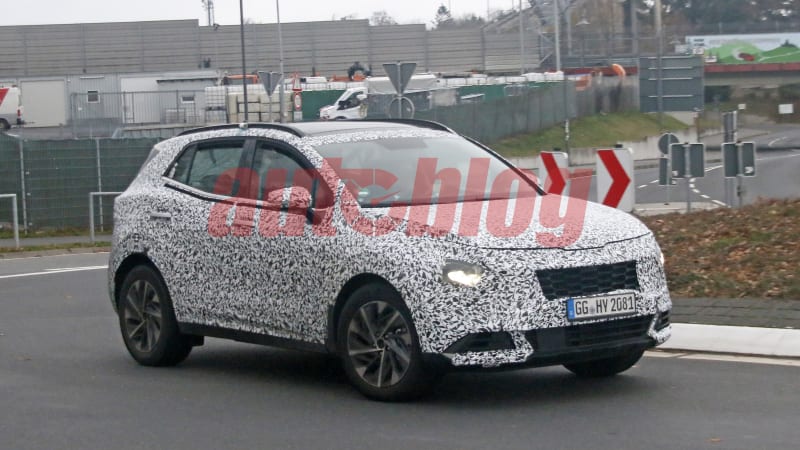 The redesigned Kia Sportage has been caught undergoing chassis development in new spy photos from the Nürburgring. Expected to debut as soon as next year (as a 2022 model), the new compact crossover will be a replacement for the sporty but somewhat unremarkable model that debuted for the 2016 model year.

Like sister brand Hyundai, Kia has been revamping its crossover lineup in earnest. The redesigned Sportage will join the brand-new Sorento, which boasts a longer list of tech features, more all-terrain capability, and an available plug-in hybrid option. The last item on that list is important, as the yellow decal visible on this prototype’s rear window denotes a PHEV powertrain, which it is expected to share with its Hyundai platform mate, the Tucson.

From what we can see here, the Sportage will retain its sporty, hot-hatch like shape, complete with the sharp rear spoiler and a matching ducktail protrusion mid-way up the tailgate. The current model’s blunted nose also appears to be returning, though we expect it will wear a more refined version of Kia’s new corporate front end.

Kia wants to sell half a million battery-electric vehicles by 2026, as well as another half-million hybrids, PHEVs and other “green” offerings. By 2027, Kia will have seven models powered exclusively by electrons. Then, by 2029, a full quarter of Kia’s sales will be from EVs, which the company is currently struggling to deliver due to battery supply shortages.

Dubbed “Plan S,” Kia’s strategy calls for 11 electric-only models by mid-decade, comprising 6.6% of the global EV market share and generating 20% of Kia’s own sales. By then, Kia President Ho-sung Song believes the total cost of ownership for electric and internal combustion cars will be about the same, as ICEs require more maintenance and fuel costs are projected to rise.