Motorists who were smitten by the Mercedes-Maybach Ultimate Luxury concept and disappointed by the brand’s decision not to build it now have a consolation prize. Created by an Italian coachbuilder named Aznom, the Palladium is a sedan-like four-seater limousine built on a platform borrowed from the Ram 1500 pickup.

The Palladium exists at the intersection of sedans and SUVs, both in terms of design and in terms of construction, and it’s marketed as a hyper-limousine. Surprisingly, company founder Marcello Meregalli explained he began looking into building a truck-based sedan after seeing the Cadillac-badged presidential limousine unveiled in 2008. “That particular Cadillac gave the final push” to the idea, he reminisced in a statement.

Beauty is very much in the eye of the beholder, so all we’ll say about the Palladium’s sheet metal is that it isn’t subtle. Its front end is dominated by a grille with vertical LED inserts, thick pieces of chrome trim, and headlights that look 1500-esque if you squint. Viewed from the side, it’s evident there was little stylists could do to mask the 1500‘s extra-long wheelbase, and the four doors are straight off the truck. And, the entire rear fascia rolls out like a giant drawer to give customers access to the trunk. It’s a feature that’s odd and innovative at the same time.

The basset-like proportions likely make the Palladium a nightmare to parallel park, especially in its home country of Italy, but they also allowed stylists to carve out an unusually spacious interior designed primarily for rear-seat comfort. Passengers riding in the back travel on a bench that Aznom describes as a throne, and they benefit from creature comforts like a separate air conditioning system, a Harman-Kardon sound system, two Microsoft tables, plus an on-board fridge. Of course, there’s space to store crystal glasses; how could there not be?

Power for the Palladium comes from a twin-turbocharged version of Ram’s 5.7-liter Hemi V8 engine. It’s tuned to develop 710 horsepower and 701 pound-feet of torque, and it’s bolted to an eight-speed automatic transmission. Aznom quotes a 4.5-second sprint from zero to 62 mph, which is on par with the Hellcat-powered 1500 TRX‘s time and impressive for a beast that tips the scale at 5,842 pounds. Part-time four-wheel drive comes standard.

Ten cars will be manufactured, and each one will be unique because clients will be invited to participate in the design process. Aznom pointed out it expects to draw interest from buyers in Europe, the United States, the Middle East, Russia, and China. It doesn’t sound like all of the available build slots have been spoken for yet, and pricing information hasn’t been revealed. 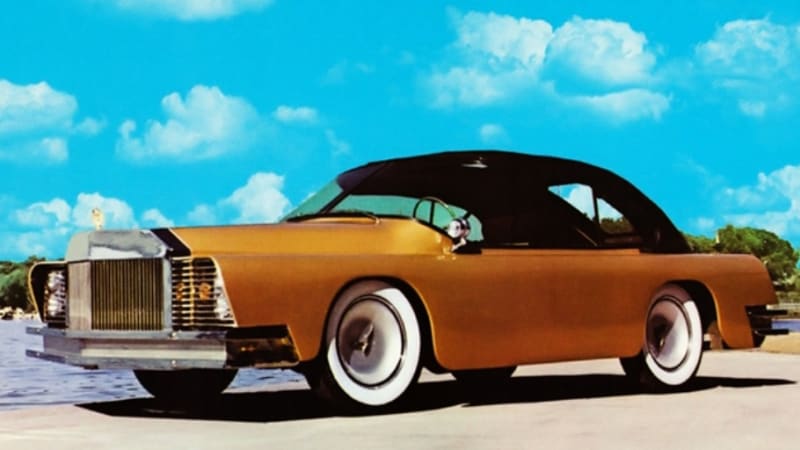 While the idea of alchemizing a pickup into a limousine with a head-scratching design is offbeat, the Palladium isn’t the first of its breed. In the 1960s, the Wisconsin-based Mohs Seaplane Corporation built the Ostentatienne Opera Sedan (shown above) on a frame borrowed from an International-Harvester truck. It planned to make at least a handful of examples of the model, which had a single roof-hinged door that gave passengers access to the cabin via the rear end, but production reportedly ended after a single example was built.