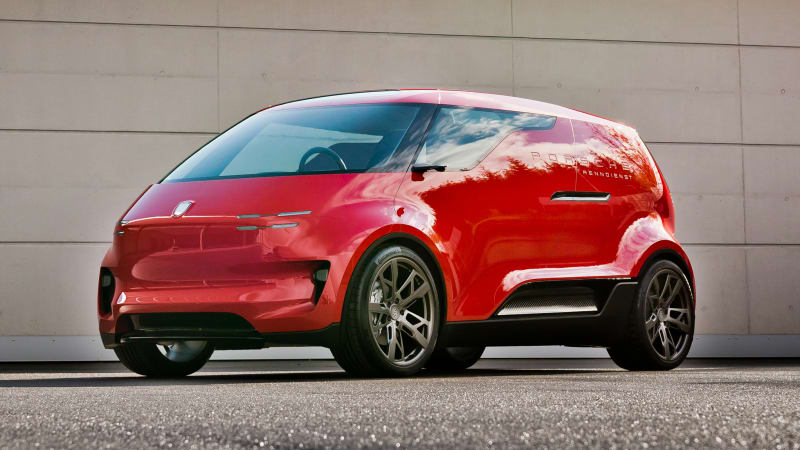 After tantalizing us with dark preview sketches, Porsche finally lifted the veil off of the three never-built prototypes it’s been publishing photos of on its social media accounts. Called 919 Street, Vision Renndienst, and Vision Spyder, respectively, they’re vastly different machines that illustrate multiple facets of the brand.

One is a race car, one is a purist-friendly roadster, and one is a minivan — seriously. Porsche isn’t the first sports car company to venture into the segment, Italian design house Bertone built a Lamborghini Countach-powered people mover in 1988, but it’s undeniably an unusual move. Back to the road: although these one-offs share little more than a Porsche crest, they were all created under the same roof. Porsche has resisted the urge to open satellite design offices in trendy places because it prefers to keep its stylists close to its development engineers.

Join us for a virtual walk through some of the previously unlit corners of the company’s design studio.

Made in 2017, shortly before Porsche announced it would leave top-tier endurance racing, the 919 Street is a slightly tamer-looking variant of the 919 Hybrid, which won three consecutive editions of the 24 Hours of Le Mans starting in 2015. It was created for privateer racers, but Autoblog learned from a company spokesperson that it also explored what a street-legal variant of the 919 presumably built in strictly limited numbers could have looked like. Think of it as a follow-up to the race-derived 911 GT1 Straßenversion built in the late 1990s. We can already imagine the 919 Street going head-to-head against the Mercedes-AMG One and the Aston Martin Valkyrie.

Power for the 919 Street comes from the same 900-horsepower gasoline-electric hybrid drivetrain that powers the LMP1-spec model, and the two cars share a carbon fiber monocoque, a wheelbase, and overall dimensions. Its design looks markedly different, however. Its front end is shorter and lower, its interior appears to be bigger, and its aerodynamic add-ons are far less aggressive. It’s almost elegant, which is unusual for a race car.

Created in 2018, the Renndienst (a name which means “race service” in German) shows what happens when a company known for making six-cylinder engines creates a six-seater van. It’s loosely inspired by the Volkswagen Bus-based race support vehicles used decades ago, but stylists refrained from giving the van retro lines; they let their colleagues at Volkswagen take that route. Instead, the Renndienst wears a futuristic design characterized by ultra-thin headlights and a windshield positioned at the same angle as the front fascia. Out back, a light bar creates a visual link between the van and Porsche’s regular-production models while emphasizing its width.

The driver sits front and center, and the rest of the cabin features a lounge-like layout, though images haven’t been released. “The study shows how the Porsche design DNA with its characteristics surface modeling can be transferred to an unknown vehicle segment,” the firm pointed out. It added that the Renndienst is capable of driving autonomously, and that it’s powered by an electric powertrain, though its specifications aren’t available.

Porsche envisioned the Vision Spyder as a modern take on the 1954 550-1500 RS Spyder. Built in 2019, it’s arguably on the same branch of the firm’s family tree as the 718 Boxster but it looks like a simpler, more basic model that falls in line with the speedster ethos. It’s fitted with a short windshield and a fixed, multi-point roll bar, but it doesn’t look like any type of top was designed for it. When it rains, drive faster or find somewhere to wait it out. Although images of the interior weren’t released, a top view of the Vision Spyder shows a two-seater cockpit with a pair of bucket seats and little else. It’s truly a back-to-the-basics machine.

Porsche confirmed the Vision Spyder is powered by a mid-mounted engine, though we don’t know if it has four or six cylinders. “The study served as the basis for further development of the design identity for combustion-engined Porsche sports cars,” according to the company. Some of its styling cues might permeate future models in the coming years.

Or as Porsche put it, “The study was intended to further develop the design identity of Porsche and provide a pool of ideas for future details. For example, the ultra-modern roll bar.” Stay tuned, in other words.

In the meantime, Porsche grouped the three prototypes and several other unseen models in a 328-page book titled “Porsche Unseen” (ISBN number 978-3-667-11980-3) that was released globally on November 12, 2020. Images by Stefan Bogner show the cars in great detail, and writer Jan Karl Baedeker tells each model’s tale.

Porsche will release information about a handful of other unbuilt prototypes in the coming weeks, and some of the cars it’s putting in the public eye for the first time will be displayed in its official museum in Stuttgart, Germany, in 2021. We applaud its efforts to share these cars with enthusiasts. Every carmaker is sitting on a stash of one-off design studies, but too often they remain shrouded in secrecy, never to be seen by anyone outside of the company. Bugatti also opened up its design studio in 2020, and we encourage other companies to do the same.

2020-11-13
admin
Share
Previous Mazda previews straight-six, affirms upcoming crossover with Toyota hybrid system
Next Hyundai To Offer 10 Electrified Models By 2022—and Most Will Be SUVs