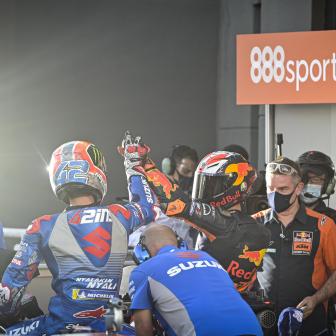 Zarco was unlucky to miss out on the front row but after negotiating Q1, the double Moto2™ World Champion will be happy with P4. Championship leader Mir will launch from P5 after a solid afternoon’s work on home soil, Aleix Espargaro joins Mir on Row 2 and that’s the Aprilia rider’s best Saturday afternoon outing since his P4 at the Czech GP earlier this year. After showing strong pace all weekend, Miller settled for P7. Eighth place Oliveira was the only other rider to get within a second of Pol Espargaro and next to the Portuguese rider on the grid is leading Yamaha rider Morbidelli in ninth. The Italian has some work to do on Sunday afternoon as he sees Mir and Rins ahead of him, but crucially, there are three title contenders behind him.