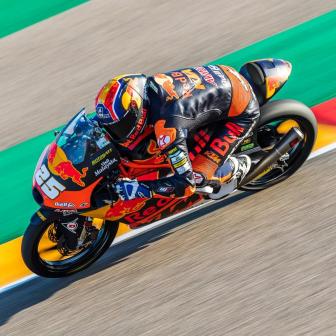 Carlos Tatay (Reale Avintia Moto3) and Ayumu Sasaki (Red Bull KTM Tech3) took P1 & P2 in Q1, as the former Red Bull Rookies Cup Champions had clearly prearranged a game plan to aid one another in their efforts, while Gabriel Rodrigo (Kommerling Gresini Moto3) left it late to seal his place in Q2, exiting pitlane with just three minutes to go. The Argentinian posted a late flying lap to seal his place in Q2 at the expense of Kaito Toba (Red Bull KTM Ajo), while John McPhee (Petronas Sprinta Racing) finished in P4.