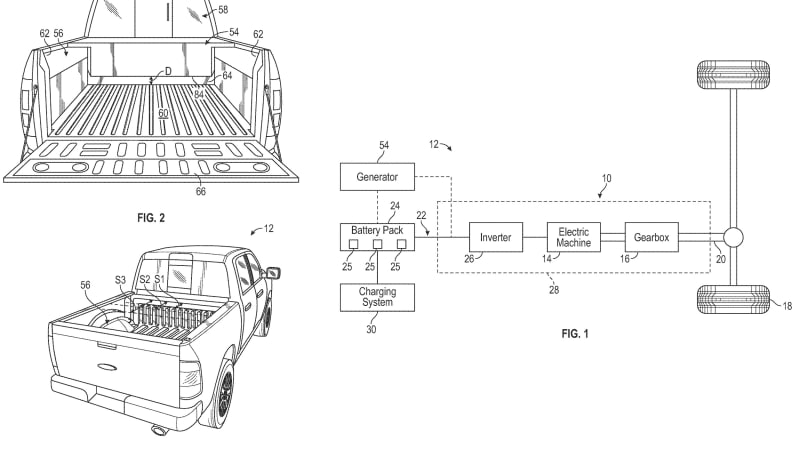 Ford is keeping technical details about the upcoming electric version of the 14th-generation F-150 under wraps, but patent drawings shed light on the kind of technology it’s experimenting with. Its engineers have seemingly developed a removable, gasoline-burning range extender that fits neatly in the truck’s bed like a tool box.

Patent documents sent to the United States Trademark and Patent Office in 2018 and finally published in September 2020 detail how the technology works. Uncovered by The Drive, they show a box-shaped range extender that consists of an engine, a fuel tank, and exhaust system, and an array of electronics. Ford calls the setup a removable generator, and it explained the system can be used to increase the electric range of a vehicle.

On paper, this setup is relatively simple. It can be configured to send the electricity it generates to the lithium-ion battery, which then uses it to zap the wheels into motion. Alternatively, the generator can bypass the battery and propel the truck on its own. Ford didn’t specify what kind of engine it plans to use as a generator, but it’s certainly not going to be the 7.3-liter Godzilla V8 it puts in its Super Duty trucks. It would have to be small and light.

Gasoline-powered range extenders aren’t exactly cutting-edge; it’s a technology that carmakers have toyed around with for decades, but making it removable is a smart move. Users will be able to drop it in the bed when they need more range, like when they’re towing or going on a long trip, and they’ll have the option of removing it when they prefer to have cargo space. Of course, putting it and taking it out will require a sturdy hoist — it’s an engine, after all. Motorists may need to take their truck to a dealer in order to get it fitted, which suggests Ford may not sell it; it’s not too far-fetched to imagine range extenders offered through stores on a pay-per-use basis.

Of course, nothing is official, and a patent filing doesn’t guarantee a technology will reach production. Ford won’t begin building the electric F-150 until halfway through 2022, it’s scheduled to go on sale as a 2023 model, so we’ll need to be patient to find out precisely what’s lurking under its futuristic-looking sheet metal. All we know at this point is that it will offer dual-motor all-wheel drive, and it will be the fastest variant of the 14th-generation truck.