Breaking News
Home / Racing / Nothing in it: Ogura homes in on Arenas

Nothing in it: Ogura homes in on Arenas 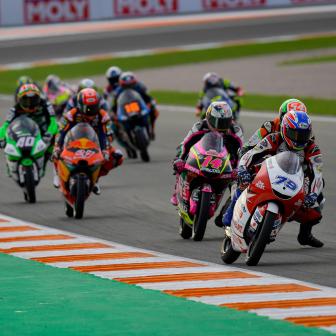 Although it’s fast becoming a two-horse race, on the way into Valencia second time around there nevertheless remain seven contenders for the crown. Celestino Vietti (Sky Racing Team VR46) is third overall; 20 points back, Tony Arbolino (Rivacold Snipers Team) is fourth with a deficit of 23 and Jaume Masia (Leopard Racing) is fifth, 24 off the top. John McPhee (Petronas Sprinta Racing) faces a longer shot from 38 points in arrears, and Raul Fernandez (Red Bull KTM Ajo) is the last rider in with a mathematical chance, 39 points behind Arenas. Some are more likely than others, but nobody expected the drama that befell Vietti, McPhee and Masia last weekend – so there’s plenty time for another twist.