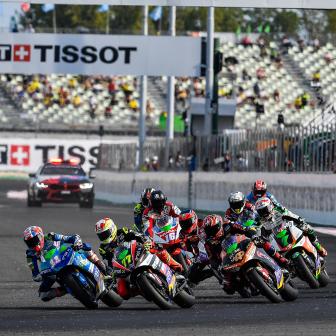 Heading in, it’s 2019 Cup winner Matteo Ferrari (Trentino Gresini MotoE) on top. The Italian has been consistent as ever and keeps reeling in the points, putting him four clear of his nearest challenger, Dominique Aegerter (Dynavolt Intact GP). Ferrari, however, made his own mistake in Andalucia to dent the maximum he could have scored – whereas Aegerter lost the lead in Misano as he fell victim to another rider’s mistake. Will that change their approach heading into the finale? Aegerter needs to gain but four points isn’t much of a deficit – and he knows he’s been more than fast enough to have battled it out in every race, taking a podium or win every time he’s made it to the line.