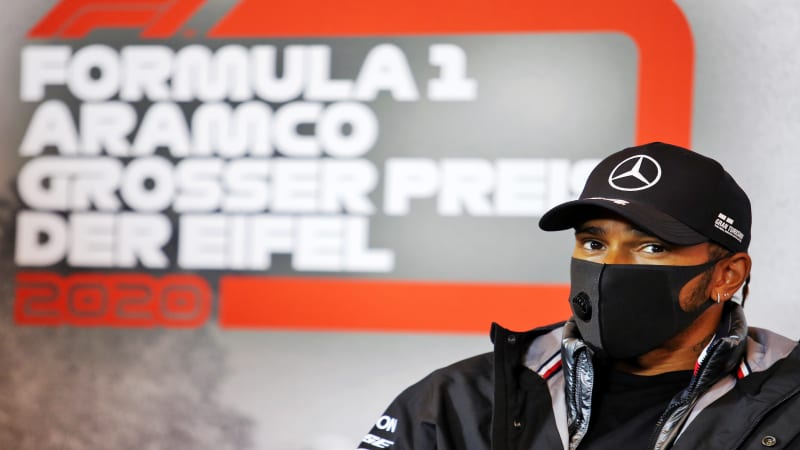 Formula One world champion Lewis Hamilton expressed concern on Thursday after a member of his Mercedes team tested positive for COVID-19 ahead of the Eifel Grand Prix in Germany.

Hamilton is going for a record-equalling 91st career victory in Sunday’s race at the Nürburgring and leads team mate Valtteri Bottas by 44 points in the championship.

The positive was the first involving one of the 10 teams since Racing Point’s Mexican driver Sergio Perez had to miss two races in August.

“It’s obviously important for everyone around the world to be continuously reminded that this thing has not disappeared, it’s still here and we still need to follow protocols and wear masks and keep our hands clean and keep our distances.”

A Mercedes spokesman said the case was being handled in line with protocols set out by the governing FIA. He gave no details about the person’s role in the team.

The sport is operating in carefully controlled bubbles, even within teams, with access to the paddock restricted to essential staff and employees subjected to regular tests.

Formula One last week reported 10 positive COVID-19 tests over the Russian Grand Prix weekend, the most so far but all of them ancillary personnel such as cleaners. It said the teams were unaffected in that batch.

The scheduled season-opener in Australia was cancelled in March, with the season then stalled and protocols set up, after McLaren employees contracted the virus in Melbourne.

“I can’t say what it’s going to do to the weekend. We have a lot of great people within our team, it’s not just about one person,” said Hamilton.

“It’s just going to take a lot of work to make sure we continue on without any disturbances.”

The Russian race in Sochi was the first with a substantial crowd in attendance. Organisers said 30,000 people visited the Olympic Park each day.

A second wave of the novel coronavirus has seen daily cases accelerate in both Germany and Britain among other European countries.

“As a driver, the last thing you want is to get it,” said Bottas. “It will definitely mean at least missing one race and even more. And we have one example of that already.

“It can be a matter of luck because it’s pretty contagious. We’re all trying to do the best we can not to get it. I fully trust how the team is handling everything.”

Reporting by Alan Baldwin in London, editing by Toby Davis and Pritha Sarkar.