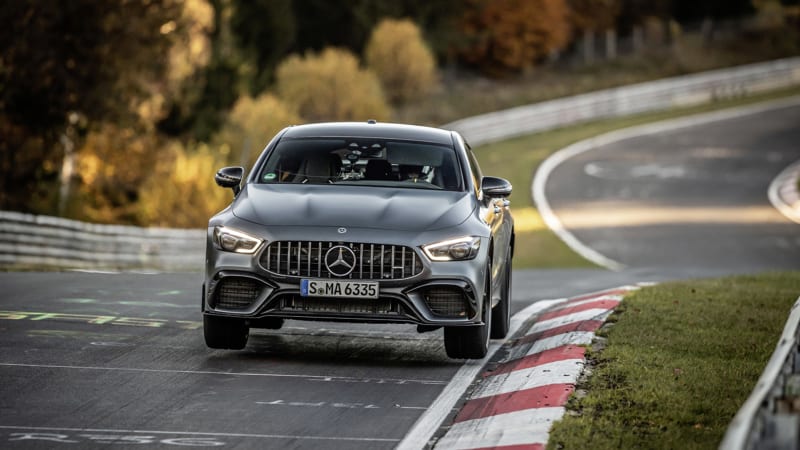 Mercedes-Benz has reclaimed the title of fastest luxury four-door around the Nürburgring yet again with the 2021 Mercedes-AMG GT 63 S, blitzing around the circuit in just 7:27.800.

Unlike the insanely quick two-door model, which puts a priority on performance, the four-door is a GT first and a sport sedan second, so sub-seven-minute times are off the table — at least until the “73” model makes its way into the picture, as is expected to happen sometime next year. In the meantime, 7:27.8 is quite quick. Mercedes-Benz says the time was achieved with an effectively stock four-door, 630-horsepower 2021 AMG GT 63 S equipped with Michelin Pilot Sport Cup 2 tires (which are an available option to customers).

The time supplied by Mercedes-Benz is for the entire 12.944-mile Nordschleife circuit, which the company says has been certified by a notary (per standardization that was introduced in 2019) and will appear on the circuit’s own leaderboard page. The AMG GT 63 S completed the shorter, 12.8-mile portion (omitting the T13 straight, which was added to bypass the modern F1 circuit when it was completed in 1984) in 7:23.009.

Either way you measure it, the new AMG GT is more than 2 seconds quicker around the ‘Ring than it was in 2018, before being knocked off the podium by the new 2021 Porsche Panamera Turbo S.

“Even though I’ve been accompanying our GT 63 through its development for several years now, it’s always impressive to see the wide spread we have been able to achieve with this exclusive vehicle,” said AMG development engineer (and two-time AMG GT record-setting driver) Demian Schaffert.

“This is especially true after the recent slight revision. On the one hand, the four-door coupe is comfortable and equipped with many intelligent safety features for everyday driving, and on the other hand it offers this extremely high level of driving dynamics and precision, which we have now been able to demonstrate once again on the demanding Nordschleife.”

Mercedes-AMG has more plans to grow the GT 4-Door range, with a new, entry-level “43” model joining the ranks for 2021 and the aforementioned 73-badged model powered by an 805-horsepower plug-in hybrid drivetrain expected to join the lineup in 2021. Built around a twin-turbocharged, 4.0-liter V8 engine. It will offer an electric range of about 31 miles.