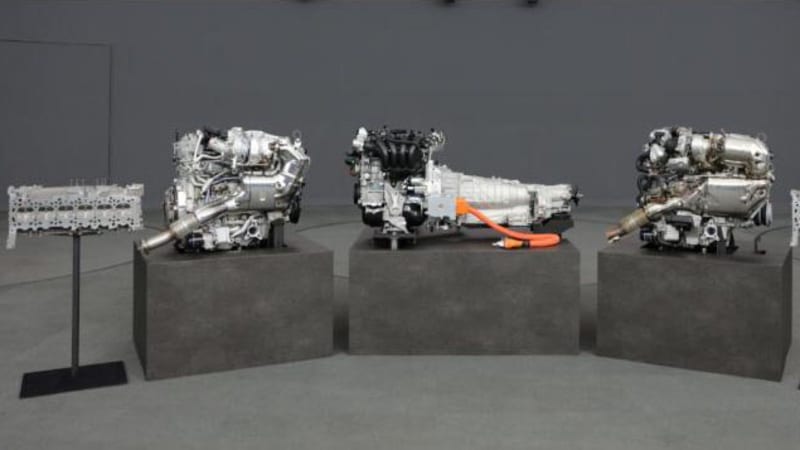 Buried in Mazda’s generally bleak second-quarter earnings report were a few juicy nuggets of news. Though the company had an operating loss of $502 million and sales are down 21 percent in part due to the COVID-19 pandemic, the Hiroshima-based firm has big plans for the future. Enthusiasts and environmentalists alike should take note.

Firstly, Mazda showed an image of its upcoming straight-six engine. Essentially, it’s the SkyActiv four that powers all of Mazda’s current lineup, but with two additional cylinders. Unsurprisingly, the company says that it can be engineered to fit any of the current SkyActiv guises — the standard octane-variable gasoline powered G, the diesel D, and the sparkless-ignition X. The big six will pair with a new eight-speed automatic and can be combined with either a plug-in or 48-volt mild hybrid system, promising big power and efficiency.

Reassuringly, Mazda says it’s committed to offering this six in a rear-wheel-drive platform, which will underpin the 6 sedan’s successor, as well as a midsize SUV. Both the platform and powertrain are said to be compatible with all-wheel-drive layouts as well.

Which brings us to the second bit of news. Mazda also pictured a four-cylinder engine with hybrid technology. The financial report confirmed that Mazda will employ  Toyota’s wildly successful hybrid system in an upcoming SUV. It’s not that Mazda is taking advantage of Toyota’s free access to all its hybrid patents until 2030. Mazda and Toyota have a capital tie-up and are nearing completion on a $2.3 billion joint-venture factory in Alabama with a 300,000-vehicle annual capacity. According to the Huntsville Business Journal, the firms have hired 750 employees so far, with room for 3,250 more.

In return, Mazda will launch a European compact based on Toyota’s Yaris Hybrid. The move is necessary for Mazda, which has lagged behind in electrification and in meeting the fleet emissions requirements in the European market. In return, by 2022, Mazda may even share the inline-six engine with Toyota and Lexus.

While the hybrid crossover and compliance with EU rules will no doubt help the environment, we not-so-secretly hope that these strategies will keep Mazda profitable enough to bring that straight-six, rear-drive sports sedan to market.

What Is Overlanding? An Automotive Overview of the Awesome Activity

So, What Is Overlanding? We don’t usually refer to Wikipedia as a source, but in ...