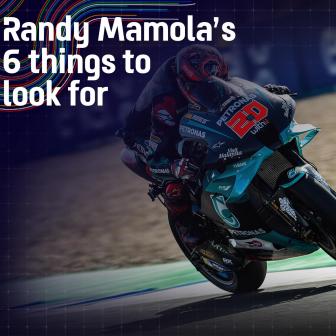 “It’s about Aleix Espargaro – super fit, super keen rider, always willing to push the limits like his brother Pol. But for the last three years, he’s been stuck in the same rut. The other manufacturers seemed to get stronger and the Aprilia wasn’t. 2020 preseason has really sparked interest, Aleix has been super happy and Bradley Smith has been doing a lot of test work with that. It’s been difficult to watch the factory because things have improved in the last three years but it hasn’t been close to what they’ve needed. The same as Suzuki – at the moment there are only two bikes, the second rider – Smith at the moment – has been doing a good job weeding through different parts for them. The speed, even the other riders have said the Aprilia is fast this year, but it’s yet to be seen. It’s one thing about riding in preseason testing alone, and doing your test work, having a fast bike in a straight line. But it’s about that longevity throughout the races and so on.