The Hyundai Grand i10 Nios and the Volkswagen Polo are not cars that you’d typically see in a head-to-head comparison but there’s a reason we have both of them today. Both of these models are now available with the option of 1.0-litre, three-cylinder, direct-injection turbo-petrol engines and said versions of both cost about the same money too. The Grand i10 Nios Turbo, in dual-tone guise, comes in at Rs 7.81 lakh (ex-showroom, Delhi) while VW’s celebratory offers mean the Polo 1.0 TSI Highline Plus can be had for Rs 7.89 lakh. So, the duo is comparable on price but how they compare on spice is what we’re interested to know. 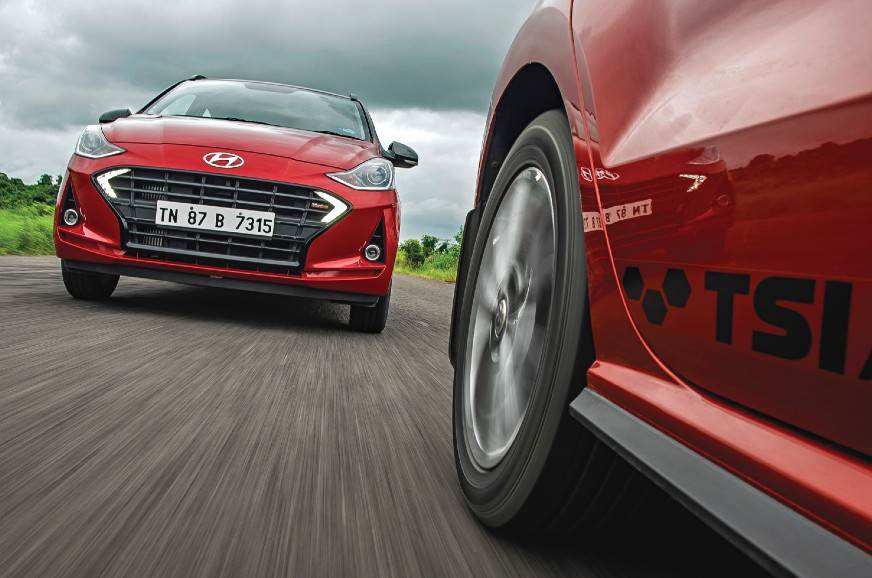 Do note, this isn’t a straight-jacketed hatchback comparo. The Polo and Grand i10 are available with naturally-aspirated engines at lower price points too. These very versions? They’re for small car buyers who don’t mind spending more for added power, and so they shall be judged. In power and torque, it’s the Polo with the slight upper hand, with 110hp and 175Nm to the Grand i10 Nios Turbo’s figures of 100hp and 171Nm. But how do the numbers translate in the real world? 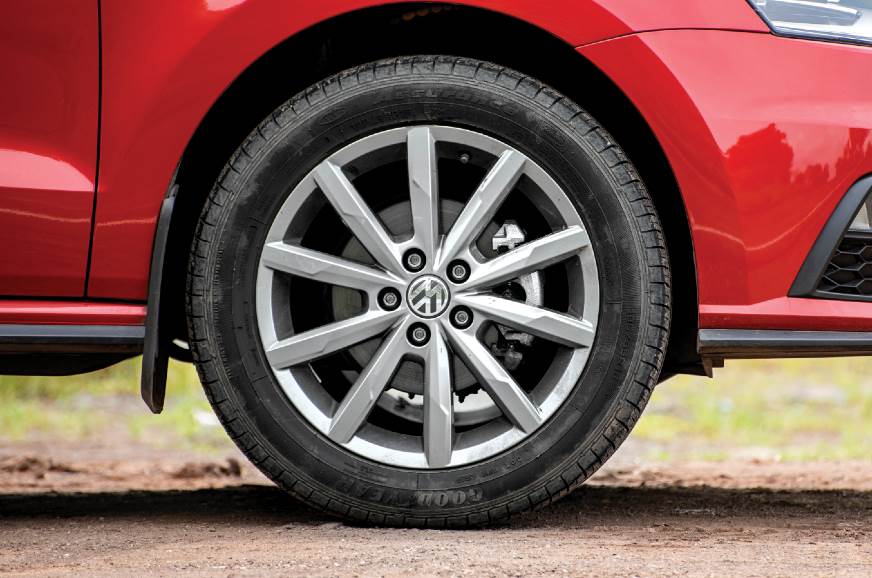 The Polo sits confident on its larger 16-inch rims.

Let’s talk of the elephant in the room first. The Polo is a decade-old car. Sure, the shape has aged well and there is a hard-wearing look to everything inside the cabin, but the dashboard is dated and even the analog dials give the car’s vintage away. However, that reassuring thunk on door shut that talks volumes on build quality is something you won’t get bored of. 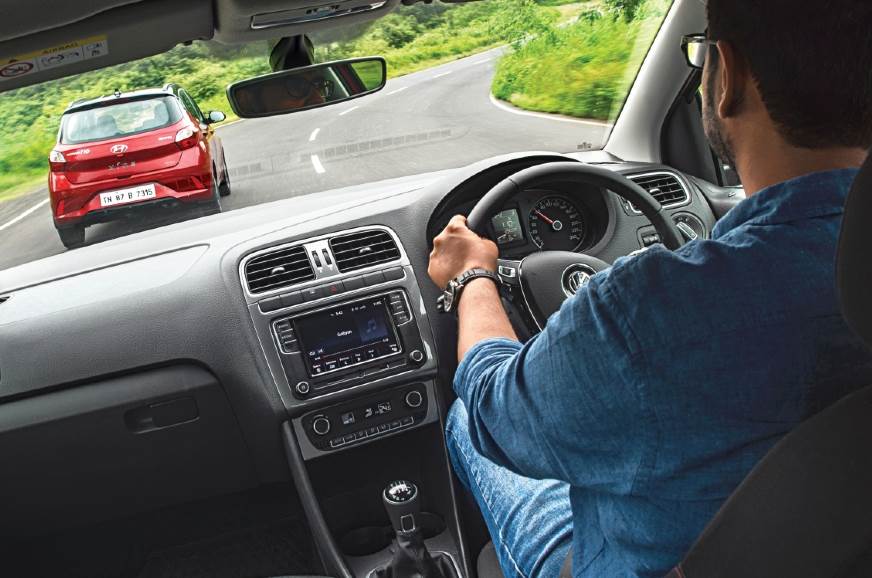 As enjoyable as the Polo is to drive, the dated cabin is a constant reminder that this is an old car.

If age is just a number to you, you’ll appreciate how the new engine has transformed the Polo. Volkswagen’s 1.0 TSI engine is an International Engine of the Year Award winner and spend some time with one and you’ll understand why. This is a small car with a big punch. There’s a rush of power at about 2,000rpm that stays till 6,000rpm and beyond. You’ll enjoy extending the engine, and getting in a quick shift on the 6-speed gearbox is deeply satisfying too. A sub-10sec 0-100kph time also gives the Polo the right street cred. 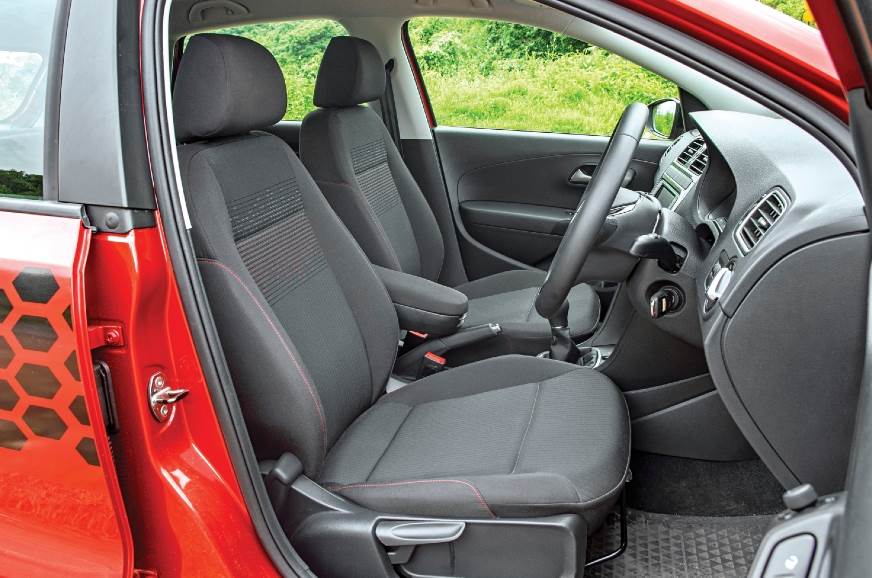 Polo has the larger and nicer seats. Steering reach adjust is handy too.

There’s much fun to be had on an open road where other elements of the Polo also come into play. It turns diligently, there’s a good feeling of connect at the flat-bottomed steering wheel and there’s lots of grip so you can really exploit what this hatchback has to offer. Helping here are the brakes that are well calibrated and there’s also a certain heft to the Volkswagen that gives you so much confidence at high speeds. Who said a 10-year-old car can’t be a fun car? 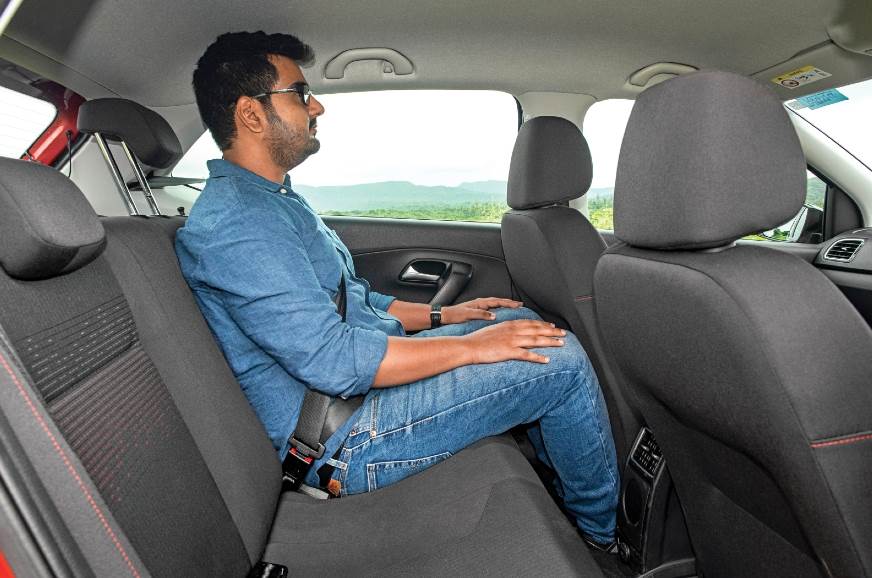 The VW is significantly down on rear-seat space.

There are some points to bring up about what the Polo is like in humdrum everyday drives. Part-throttle responses are decent and the Polo picks up speed quite easily from about 1,200rpm or so. But if you want a bit more or want to make a quick overtake, you will have to be mindful to be in the right gear. Speaking of which, there is more effort needed on the Polo’s gearbox and the clutch is longer in travel too. There’s also a slight firmness to the ride in town. The Polo does ride on larger 16-inch rims. 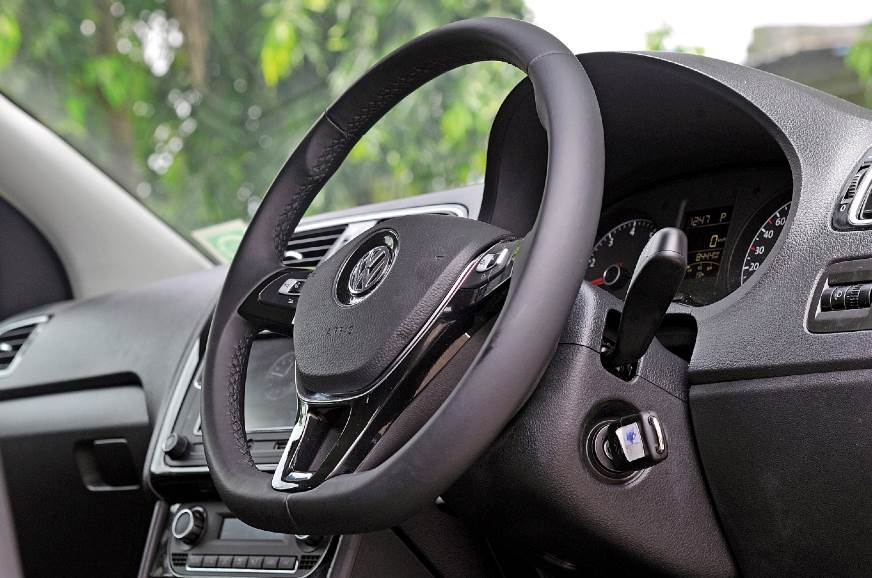 Over to the Grand i10 Nios. And first things first, it is the easier car to drive in town. The Hyundai’s engine is a little bit friendlier, granting you access to power at a lower RPM. What you’ll also note is that the Grand i10 Nios has the softer setup and rounds off the bumps better than the Polo. And in town, you will appreciate the lighter steering weight too. But that’s not entirely what this version of the Nios is about. 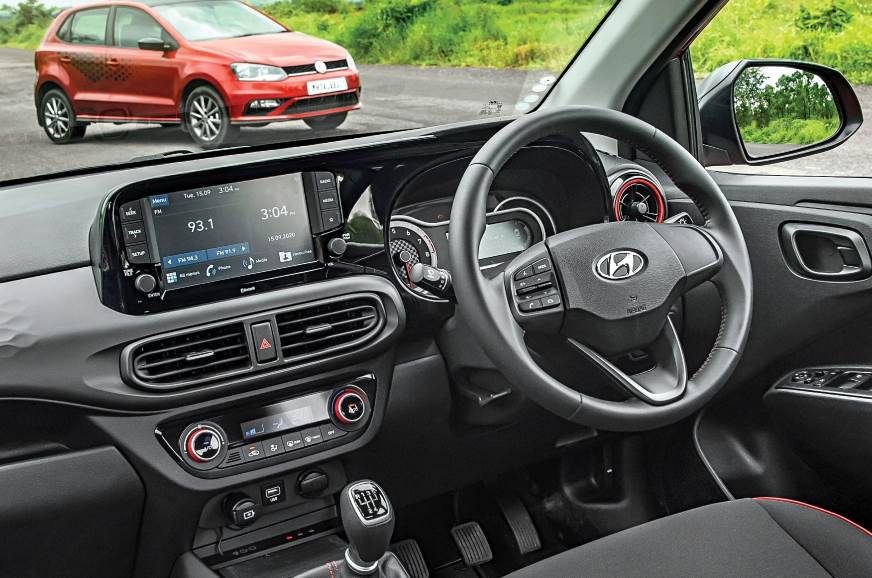 The Nios has the more user-friendly cabin. High-set touchscreen is easy to reach and in clear sight.

If you’re familiar with the standard 1.2-litre Nios petrol you will notice the added grunt on this one. This is a proper mid-range, it feels more energetic throughout the powerband and just makes overtaking that whole lot easier. There’s no comparison between standard and turbo Grand i10 Nios in flat-out performance, with the 9.82sec 0-100kph time being the headline figure here, bettering the Polo’s time, if only just. The Hyundai Grand i10 Nios does feel quite different to drive through the gears. The Nios Turbo doesn’t rev as quickly as the Polo does and that’s down to the Hyundai’s use of a 5-speed gearbox and taller ratios. Third gear, for instance, is good for 164kph! You can wind the Hyundai engine pretty hard, and you’ll like how the friendly Nios changes character when you do so. Turn-in is also nice and the overall feeling is of being in a cheeky little car that can liven up boring commutes. 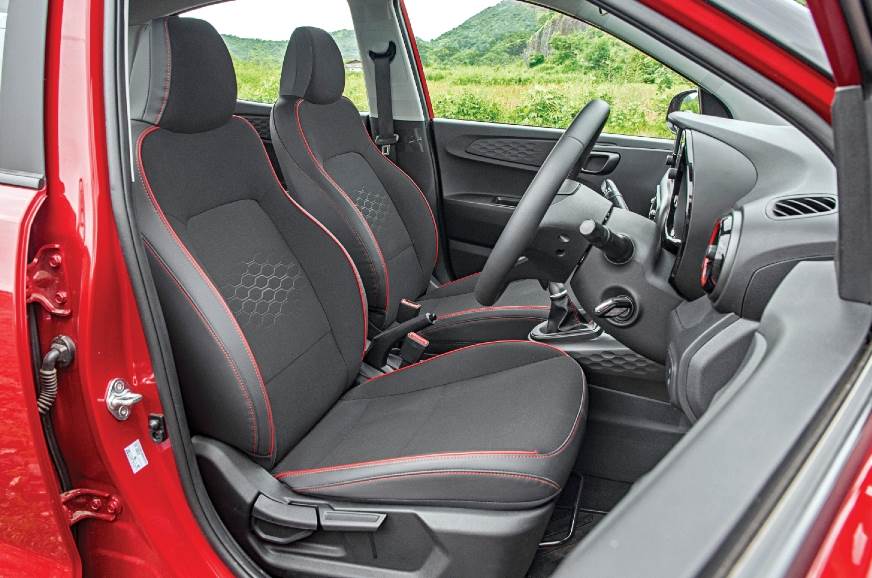 Nios gives a better view out but the seat isn’t supportive enough.

It’s outside city limits that the Nios Turbo trails the Polo. The Hyundai doesn’t feel as tied down as the VW, the steering feels inconsistent when you’re around the corners and grip levels are down too. Truth is, it’s the Nios’ tyres that give up well before the chassis does. There is also more of that three-cylinder thrum in the Nios though, and in general, the cabin is noisier than the Polo’s. 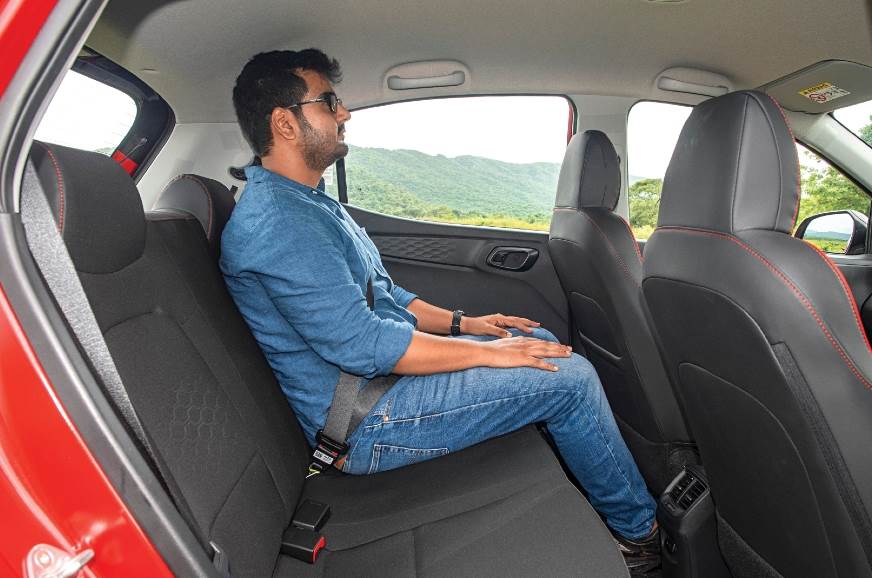 Nios is roomy but small headrests are a negative.

Of the other things, the Grand i10 Nios Turbo does give you a better view of the road and the high-set position of the touchscreen also puts you at immediate ease. The black cabin and red detailing also do their bit to add some flavor to the Nios Turbo’s cabin. 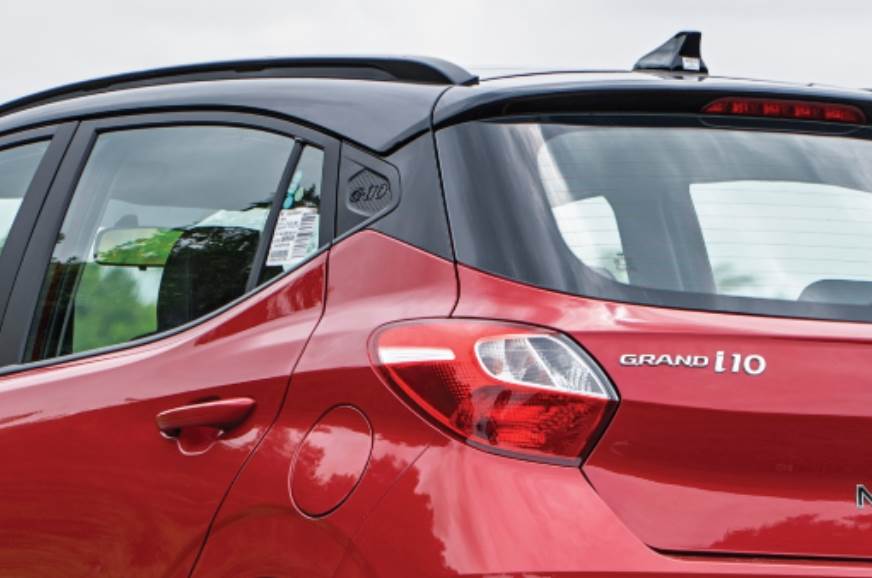 There are other areas of difference too. Talking features, the Polo TSI Highline Plus and Grand i10 Nios Turbo Sportz get auto climate control, touchscreens with Android Auto and Apple CarPlay, and reverse cameras. The Hyundai gets a wireless mobile phone charger but disappointingly missing altogether on the sole variant of the Nios Turbo is a rear wiper. Sure, the touchscreen can relay the feed from the rear camera on the go but, on rainy days, this is a compromise, at best. It’s the Polo that actually packs in more with cruise control, auto-dimming mirrors and rain-sensing wipers. Steering reach adjust, a rear wiper and even auto up-down for all four windows are also offered only on the Polo. Neither car gets push-button start-stop or keyless entry. In terms of safety, both cars get dual airbags, ABS and rear parking sensors. 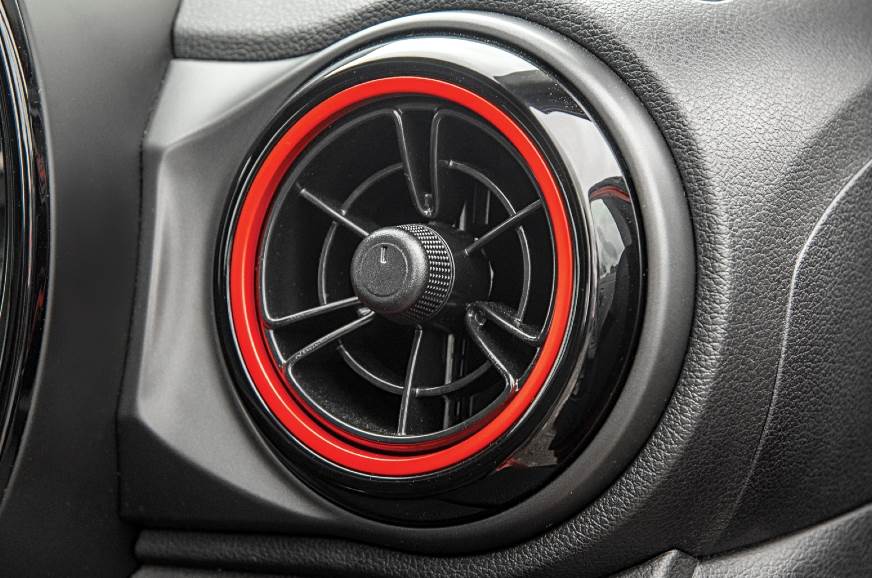 You’ve seen these cars before, so I won’t go deep into the looks. The Polo does look like the more wholesome car. It is larger and longer in wheelbase, too, but rear-seat space is quite limited. It’s the Nios Turbo that offers greater legroom and there’s also more headroom, thanks to the higher roof. Sadly, the Nios Turbo only gets small, fixed headrests at the back. In terms of luggage space, both cars offer enough room for a weekend trip’s worth of bags. 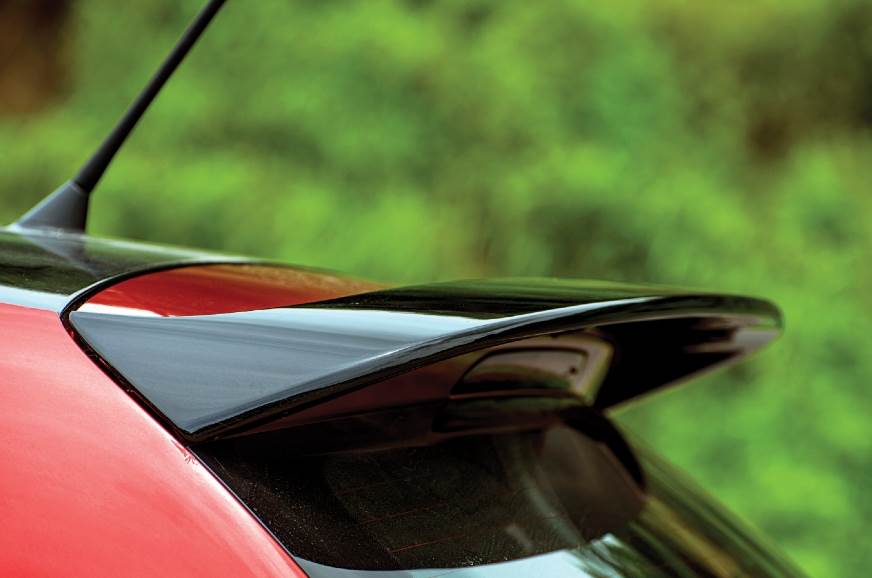 So which hatchback should it be? It depends on what you give more weightage to. If you are primarily looking for an easy-going city commuter that also has a sporty side, the Grand i10 Nios Turbo is the one for you. The Hyundai feels more modern and is also the more practical pick by virtue of its roomier interior. But if you are the sort who looks forward to long drives out of town and are okay to buy an old car with a new heart, the Polo with its zingier engine and big car dynamics is the model of greater interest. 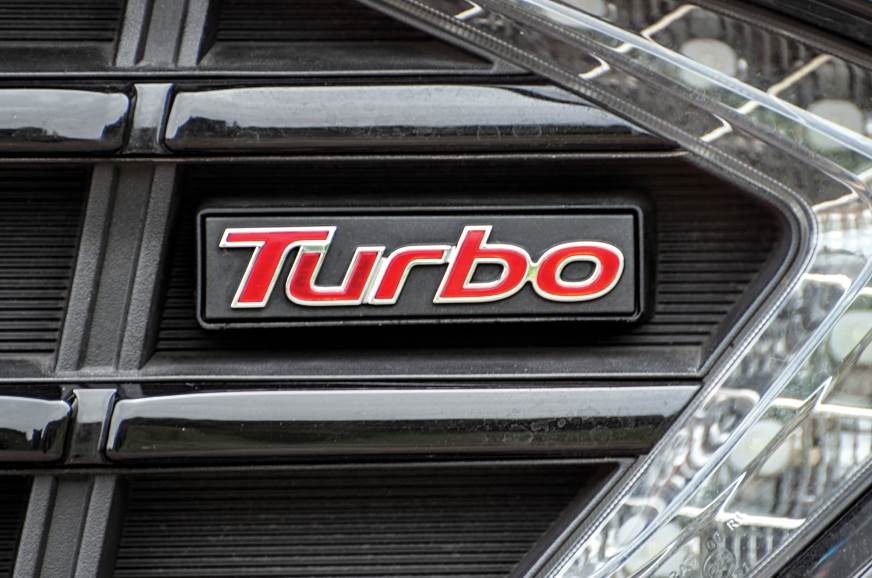 Which type of buyer are you?