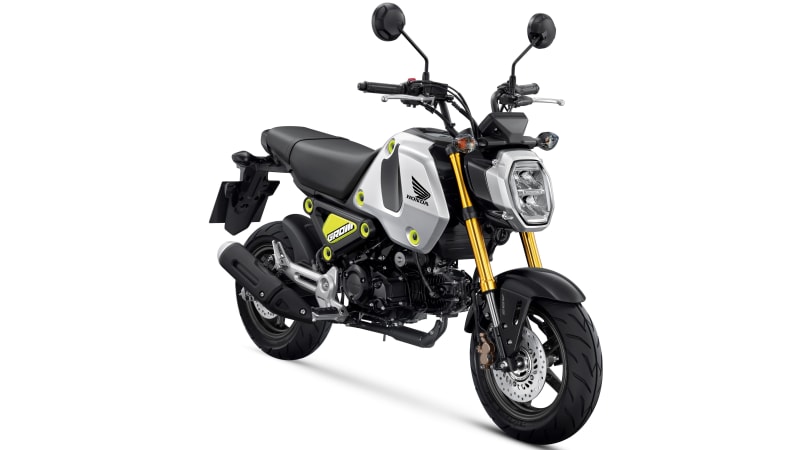 It’s been six years since Honda introduced the cute little Grom mini machine, and at this point it’s safe to say it’s had a very successful run. Now it’s time for a refresh. The updates seen here specifically apply to the European version of the Grom, but Honda’s U.S. Powersports arm promises we’ll see the new Grom Stateside at some point in the not-too-distant future.

The Grom soldiers forth with a single-cylinder 125cc engine, but it’s been updated and is now compliant with EURO5 emissions regulations. Power is up a fraction of a horsepower, but the big news is the addition of a five-speed gearbox to replace the old four-speed unit. Honda says the Grom’s top speed increases from 54 miles per hour to around 59 mph, and while that isn’t a massive increase, we’d wager around-town, seat-of-the-pants performance will see a more meaningful improvement.

Besides the additional gear and lowered emissions, the new Grom’s bodywork is a major departure from the mini-sportbike look of the previous edition. Honda says there’s “a new kind of quirkiness” to the Grom’s styling, and we have to agree it’s unique. Six fasteners hold the plastic bits to the steel backbone frame, and we’re thinking that will allow owners to further individualize their bikes. See for yourself in the photo gallery above, and stay tuned for more information from Honda about U.S. pricing and availability.

This 2003 Infiniti G35 Coupe Is Supercharged and Spotless

Vintage SUVs are garnering more interest among car collectors, but the challenge with these vehicles ...