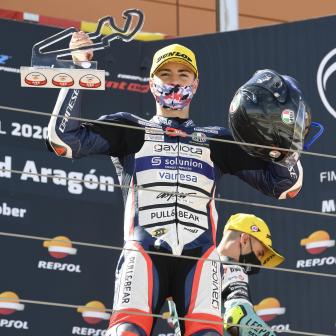 In the HETC, Zonta van den Goorbergh (Super-B) had a perfect day with two victories in a row as drama struck the series leader. In Race 1, van den Goorbergh proved too strong for surprise challenger Alvaro Carpe (Hawkers Finetwork Junior Team) who secured his maiden HETC podium. Harrison Voight (SIC58 Squadra Corse) won a fierce battle for third which saw Marco Morelli (Talent Team Estrella Galicia 0,0) and Adrian Cruces (Cuna de Campeones) crash at the final corner, while David Alonso (Openbank Aspar Team) was already eliminated following a crash at Turn 13, his first DNF of the season. The Colombian responded in Race 2 although he was still unable to deny van den Goorbergh, who triumphed again. Alonso was embroiled in a battle for second with team-mate Ivan Ortola (Openbank Aspar Team) and Marco Morelli, which he was successful in by just 0.093s.
Five more races follow on Sunday with the possibility of the Moto2 ECh and HETC titles being decided. Here is the schedule for another bumper day of action.

8 celebrities with the craziest car collections

John McPhee to continue in Moto3™ for the 2021 season