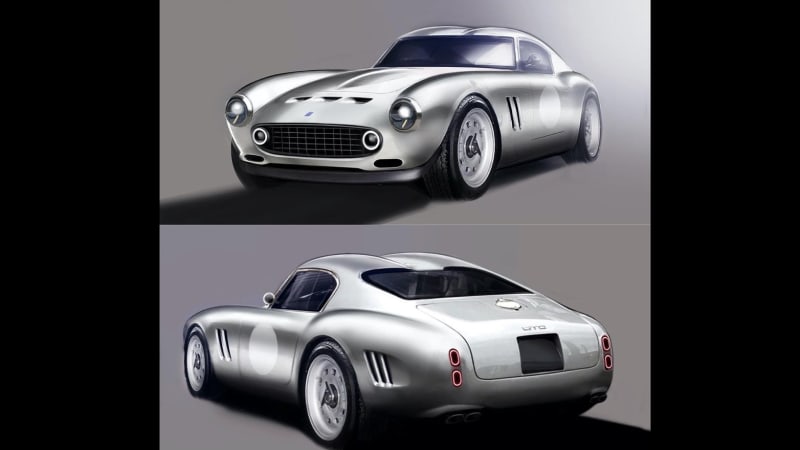 Ferrari lost the court battle over the 250 GTO’s design in July 2020. England-based GTO Engineering took advantage of the ruling to release a modernized version of the car appropriately named Moderna.

Sketches released by the company show a coupe that shares a silhouette and a handful of styling cues with the 250 GTO, which was built from 1962 to 1964. It’s not a Xerox copy of the Ferrari, however, and it wasn’t designed as one. Stylists gave the Moderna a shorter, flatter front end with LED lights, a double-bubble roof, and a more rounded rear end with quad exhaust tips. Knock-off wheels and a chromed fuel filler cap complete the look.

We haven’t seen the interior yet, though we know it’s a two-seater, and technical specifications remain under wraps. GTO Engineering simply stated the Moderna will be powered by a V12 engine developed in-house and bolted to a manual transmission, and it will tip the scale at under 2,200 pounds thanks in part to race-bred weight-saving techniques, meaning it will weigh about 150 pounds less than a fourth-generation Mazda MX-5 Miata. Motor Authority reported the Moderna will be built around a tubular steel frame, with aluminum subframes and carbon fiber body panels. Customers will have the opportunity to customize several aspects of the car, including the exterior paint, the upholstery, different suspension components, and even transmission-related parameters.

Modern materials and techniques will be used to manufacture the coupe, but GTO Engineering aims to retain what it calls “the special 1960s sports car characteristics.” While pricing information hasn’t been announced yet, keep in mind the original 250 GTO is one of the most expensive cars in the world. WeatherTech founder David MacNeil purchased chassis number 4153GT, an example with a long racing history, for $70 million in 2018. Viewed in this light, even a seven-digit price tag will make the Moderna look like a relative bargain.

General Motors has dropped plans to take an equity stake in Nikola and build the ...