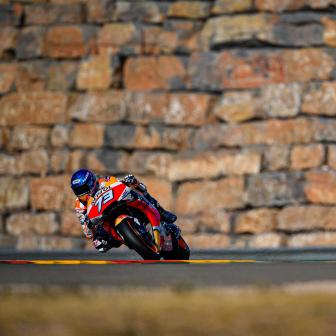 Finishing second in FP4 was Le Mans podium man Alex Marquez (Repsol Honda Team). The premier class rookie is improving every time he heads out on his RC213V, and Aragon is more proof of that. On fresh medium Michelin rubber, the reigning Moto2™ World Champion didn’t trouble the 1:48s, setting a best time of a 1:49.220. Marquez then switched to a five-lap old rear soft tyre – keeping his used medium in – and was almost immediately able to dip into the 1:48s, a 1:48.862 and 1:48.656 – his best – came in before later in the run, he set a 1:48.920. Marquez’ strength this year has been his race pace, especially late in the battle. Starting from a career-best P11, the rookie should be well in the hunt for a top six finish, or more.

In the round-up: BRDC Young Driver award winner Johnathan Hoggard has completed a day of ...