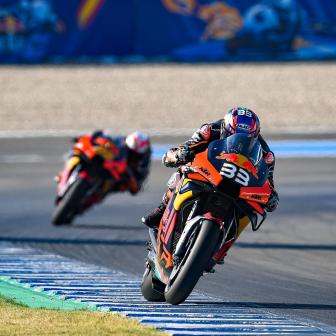 Nine-time World Champion Valentino Rossi (Monster Energy Yamaha MotoGP) looks like he’s found something extra in Andalucia. The Doctor doesn’t look like he can match the pace of Quartararo or Viñales judging from the FP2 timesheets, but there’s plenty of 1:38s in both of his runs. Looking at the second run, where he had 11 and 16 lap old tyres underneath him – hard front, medium rear – Rossi produced six 1:38s, with his best of 1:38.292 coming on his final lap. On a front hard that had 23 laps completed on it and a rear medium that had 28 on the clock, it’s promising.