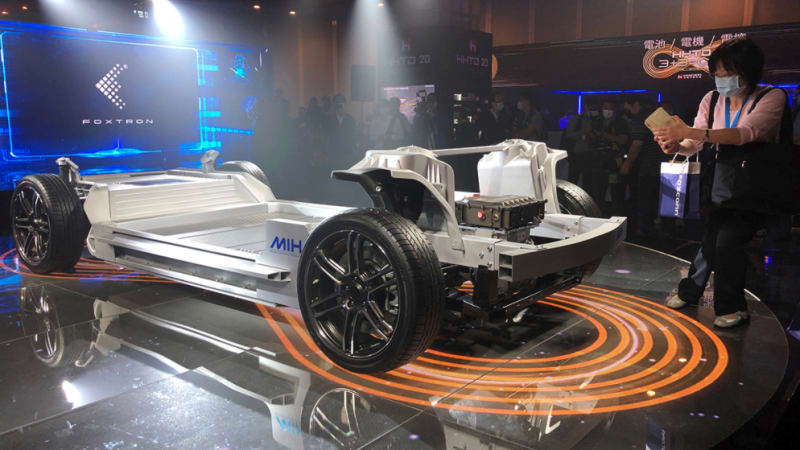 Foxconn, the Taiwanese electronics contract manufacturer that’s best known for assembling Apple products, has rolled out an automotive EV platform, part of a push to become a manufacturer of electric-car components. At the unveiling in Taipei, Foxconn Chairman Liu Young-way said he’s targeting a 10 percent share of the global EV market as soon as 2025.

The chassis is described as “open-source,” with customizable elements including size, wheelbase, suspension type, and battery size. Partner automakers could fine-tune it to their needs, and Foxconn would assemble it for them.

The company additionally said it plans to introduce a solid-state battery for EVs in 2024 that would be superior to today’s lithium-ion electric-car batteries.

In January, FCA named Foxconn as a joint-venture partner to build EVs in China. Foxconn currently is a supplier to Tesla. The chairman said his company is talking to multiple automakers about further tie-ups.

In the United States, Foxconn has been in the news over its planned factory in Wisconsin. In a deal heralded by former Wisconsin governor Scott Walker, the state promised to give the Taiwanese manufacturer $3 billion in subsidies for a new plant that was to assemble LCD displays, and President Trump participated in the groundbreaking ceremony in 2018. Recently, though, Wisconsin said it would not be providing the first installment of the money because Foxconn failed to hire the agreed-upon number of workers or invest the required amount into the project.

2020-10-16
admin
Share
Previous No, This Mid-Engine Semi-Truck Fused With a Ford Station Wagon Isn’t Photoshop
Next “The level of MotoGP in 2020 is exceptional”

General Motors is blunt about it. The 2022 GMC Hummer EV, a full-size electric pickup, ...