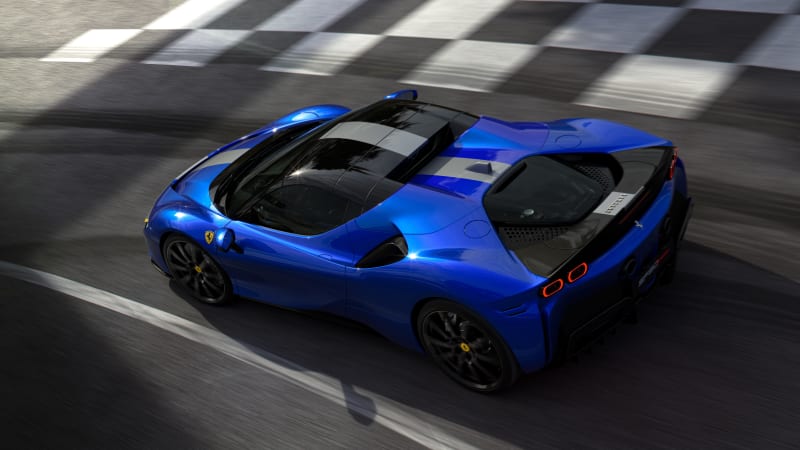 The new Ferrari SF90 Spider has been unveiled as the open-top sibling to the Prancing Horse’s SF90 Stradale. The SF90 Spider thus becomes Ferrari’s first plug-in-hybrid roadster, and with nearly 1000 horsepower on tap and four driven wheels, performance is solidly in the supercar realm. The new Spider maintains the Stradale’s  211-mph top speed, and it rockets from 0 to 62 mph in 2.5 seconds.

Like other Ferrari Spiders dating back to the 458, the SF90 is a retractable hardtop. The top is made of aluminum, which saves a claimed 88 pounds over more traditional materials, although the Spider’s stated dry weight (3,682 pounds) is still 220 more than the Stradale. The retractable roof can be lowered or raised in 14 seconds and can even be operated when the car is moving at low speeds. A power rear window that can be raised even when the top is stowed provides a measure of wind-buffetting protection for the cockpit. Additionally, the center section of the cockpit has been redesigned to help manage airflow: A central trim piece between the seats channels air away from the occupants’ heads and shoulders and into a double-layered trim piece at the top of the tunnel. The rest of the cabin mirrors that of the SF90 Stradale, with a 16-inch curved display screen, a head-up display, and a steering wheel with haptic-touch switches on the spokes.

The SF90’s plug-in-hybrid powertrain is unchanged from that of the SF90, which means a mid-mounted, twin-turbocharged 4.0-liter V8 (which alone makes 769 horsepower), supplemented by a trio of electric motors fed by a 7.9-kWh battery pack. One motor, located between the engine and the gearbox and making 157 horsepower, directly bolsters engine output, while two other 97-hp units each power one front wheel, giving the SF90 all-wheel drive as well as torque vectoring across the front axle. Total output stands at 986 horsepower, and the engine’s grunt is dispatched via Ferrari’s latest 8-speed DCT transmission.

Because the Spider’s roof stows where the engine-heat vents are in the Stradale, Ferrari engineers had to redesign the heat-management system for the powertrain. They introduced transverse louvers in the rear screen to exhaust engine heat. Compared to the coupe, the Spider also has a specially designed rear spoiler with both a fixed and a movable element, which allows it to either minimize drag or maximize downforce.

Impressively, the engine remains visible in the SF90 Spider even when the top is retracted. Ferrari designers also reworked the car’s B-pillars to seamlessly integrate the removable top.

The Spider, like the SF90 Stradale, can be had with the optional Assetto Fiorano track pack, which includes Multimatic shock absorbers, a carbon-fiber rear spoiler, other lightweight carbon fiber and titanium elements that shave 46 pounds, ultra-sticky Michelin Pilot Sport Cup 2 tires, and, most critically, an available two-tone livery “that further underscores the car’s racing vocation.”

U.S. pricing has not been announced, but we’re told the Spider command a tariff about 10 percent more than the Stradale, currently $507,300. Besides a shopping bag full of money — or, perhaps, bitcoin — SF90 Spider buyers will also need a good bit of patience. U.S. deliveries aren’t set to begin until about a year from now, at the end of the third quarter 2021.

2020-11-12
admin
Share
Previous Aston Martin DB9 for sale has an amazing 104,854 miles on it
Next The View Through The Army’s New Night Vision Goggles Looks Straight Out Of A Video Game