Driving ICON’s 1949 Hudson Commodore Derelict: It Will Eat Your Mind for Breakfast

CHATSWORTH, California—Don’t make the same mistake that I did—assuming that this 1949 Hudson Commodore, latest in ICON’s Derelict series of one-off builds, is just a beautiful old car with a massive modern motor.

I mean, it is a beautiful old car with a massive modern motor—a supercharged LS9 Corvette engine, if you must know—and it does everything you’d expect, i.e. melt its own tires like they were made of butter and leave any and all comers in its V-8-bellowy wake. It’ll also stop and turn like a modern car. No, that’s not right—it doesn’t turn exactly like a modern car, and there’s a very good reason for that.

The steering has some on-center play, just like I imagine the Hudson would have had in 1949 when it was new. It accelerates like a muscle car but its straight-line ride is a dignified float. As the road curved, I turned in and the Hudson swayed gently into the turn. I prepared myself for drama, but none came—instead, the car… well, it just sort of changed.  Suddenly the steering felt alive. The car made it clear that it wouldn’t just tolerate going faster, it wanted to go faster. Go on, the car seemed to say. You’ve got 638 horsepower under your foot. I’m game to use ‘em all if you are. C’mon, buddy. Let’s do this.

I was driving a half-million-plus-dollar one-off build on an unfamiliar road, with ICON’s head honcho next to me on the bench seat. All good reasons to take it easy. But the car was whispering…

And then the road straightened up, and I was back in 1949.

Scott Evans, my colleague at MotorTrend, drove the Hudson and did a great write-up on the technology and the craftsmanship that make it what it is. Me, I wanted to know more about why the Hudson is what it is. Jonathan Ward, ICON’s founder, owner, and head magician—a man best known (perhaps unfairly, I now realize) for ICON’s Land Cruisers and Broncos—was only too happy to tell me how the sausage is made.

“Derelicts are built for a specific person,” Ward explained. “A big part of the process is diving into their head to understand everything, down to how they want the steering to feel on center. This client said, ‘I want it to have a retro, floaty, cruiser vibe, but if I hit Mulholland and I want to get rowdy, once you steer into the curve, I want it to bite.’ And we can balance that. In that scenario, we work with barrel width, offset, ratio, steering wheel diameter. Like a chef, we understand how many pinches of what spices will create those end effects. It’s the artful combination of those ingredients that let us get really specific.

“After so many years of building, we have a surprising amount of control over that. So even that specific dynamic that you feel in the Hudson, you’re not going to feel that in the ’49 Merc that we did. [The Derelict builds] are all going to be unique. They’re highly personal builds. They’re not for everyone. They don’t make sense on a lot of levels, but they make a hell of a lot of sense to me and the client and the build team, and that’s enough. That’s beautiful.” 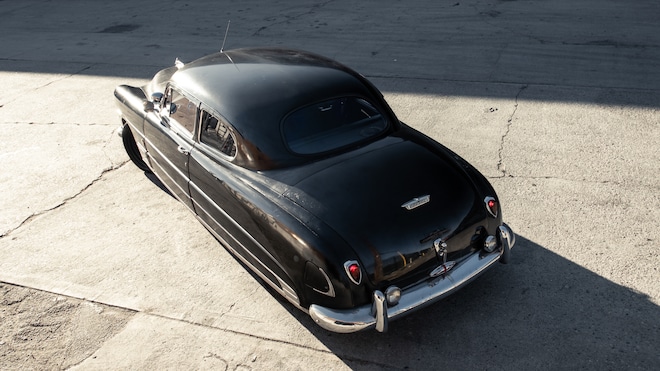 The Hudson is the 19th build in the Derelict series, which Ward says “started with me being a geek. I got tired of over-restoring stuff and being a dick about it—oh no, dogs can’t come, or we’ll have to rent a U-Haul truck to haul that, or no, don’t park there—I have no patience for that. I want something that’s engaging, that has a sense of romance and history, and is all [messed] up so I don’t have to be an asshole when my kid puts a ding in it with a skateboard.”

Not Just Any Car Can Be an ICON Derelict

Look through ICON’s list of Derelict builds, and you won’t see any of the usual resto-mod subjects. Cars that have gotten the Derelict treatment include a ’58 Rolls-Royce Silver Cloud, a ’67 Volkswagen bus, a ’66 Fiat gardener’s van—and, of course, the original Derelict, Ward’s own 1951 DeSoto wagon.

“I love doing orphan weirdo cars that no one else has built,” Ward says, “so you don’t see me doing ’65 Mustangs or ’57 Bel Airs. I like doing the weird shit, the orphan brand, off the beaten path, cars that people don’t even know what it is or what year it is.

“I had a client once say these cars are like onions. You keep peeling back layers and discovering things because of the depth of thought and geek-out that went into every little detail.”

Peeling Back the ’49 Hudson’s Layers

And so it is with the 1949 Hudson. First layer: It’s a Hudson, and that’s just cool. Hudsons were known for their “step-down” styling—early unibodies, really—and my favorite feature is those fender skirts that all but disavow the presence of the rear wheels. Parked with the engine off, the Hudson doesn’t sit; it floats like some sort of automotive ghost.

That’s echoed in this particular Hudson’s patina. A barn find of sorts, the Hudson wears its age and experience in its faded black paint, traces of surface rust and bad rough metal work, all now carefully sealed and protected. The wheels look like original steelies at first glance; in fact they are 18-inch forged aluminum wheels wearing the Commodore’s original hubcaps.

Inside, the Hudson looks original—but what I’m learning from Ward is not that looks can be deceiving but rather, in the ICON universe, they almost definitely are. And so we peel back another layer: The vents are custom-built for the Hudson’s icy-cold A/C system. The control knobs look original, but they aren’t—they’ve been remade and relettered and re-arranged. On an original Hudson, the knobs don’t line up because the mechanisms behind them wouldn’t fit, so ICON fixed that.

It makes me think of something he said when we talked, specifically a complaint about modern products being “further and further away from being the best possible creation that the designer who originally put pencil on paper wanted it to be, because now they’re chasing so many other priorities [and] design is really an afterthought. I hate that.” On the Hudson, he fixed it.

The upholstery is yet another layer. Back in the day, the Hudson would have had a simple vinyl interior. The Derelict is done up in leather, hand-sewn with painted alligator skin inserts, all made by hand—Ward’s hands, to be specific. But nothing is shiny and new: “The patina and the way it’s stitched,” Ward explains, “the finish and the sheen and the tone, is cohesive with that vintage vibe.

“Ways of making things cheaper and more scalable is what I detest,” he continues. “A dielectric stamped faux kinda-sorta western-tooled leather-effect vinyl interior? Hell no. Working with a saddlemaker friend to reinterpret the car that had that vinyl interpretation of classic saddlework, everything down to the actual patterns and tooling, being honest to the history of that art, and working with the best guy in that art form to execute it? Hell, yes.” 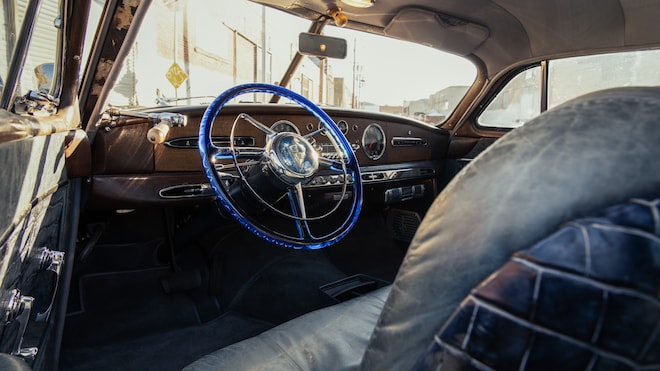 Even the steering wheel is an illusion. The translucent blue plastic was an option on the 1949 Commodore, but with modern power steering gear, the car no longer needed the massive tiller with which it was delivered, so Ward had a 16-inch version cast. It took several tries and wound up being a four-figure investment—just for the steering wheel.

“That’s what makes them so much fun, and not-so-smart business,” Ward tells me. “You can hemorrhage hours just on that one decision. A simple ‘Yeah, that would be cool’ could mean 200 hours of prototyping and engineering to get it right and make it work. It’s not for the weak of heart.”

So why not preserve the Commodore with its original straight-eight? For Ward and ICON, it’s all about the clash between reminiscence and reality.

“We all look at the past through the rosy glasses of memory,” he said. “I hear this story countless times. ‘My granddad taught me to drive in a ’50 Chevy pickup, and I had all these memories, so I had my assistant go out and find the nicest one out there, fully restored. They delivered it and it wouldn’t start.’ The man-machine relationship is so divorced from the elevated emotional vibe that drew you to it, it’s just a setup for disappointment.”

And so Ward embraces what he calls “technical perversions”. When we think of old cars, Ward says, we forget “that the steering is more of a waltz. The accelerator doesn’t necessarily accelerate. I think people gloss over that because of the emotional attachment they have to the life experiences and memories.

“Carburetors, three-speeds, drum brakes? [Screw] that, I don’t want none of that. I’ve been corrupted enough by modern cars. Fuel injection, ambient air sensors, air density meters—the adaptivity of it gives you the best performance, responding in real time to the driver and environment. Those are the technical perversions I appreciate.”

Distill Ward’s philosophy, and you get a Derelict build like the 1949 Hudson—not just a nice old car with a massive engine, but rather a design masterpiece that constantly challenges your sense of reality.

“They should be time machines,” Ward says. “When you open that door, it should take you to a certain time and place and scale of emotion. Then, when you turn the key, I want it to be a mindfuck.”

The post Driving ICON’s 1949 Hudson Commodore Derelict: It Will Eat Your Mind for Breakfast appeared first on Automobile Magazine.