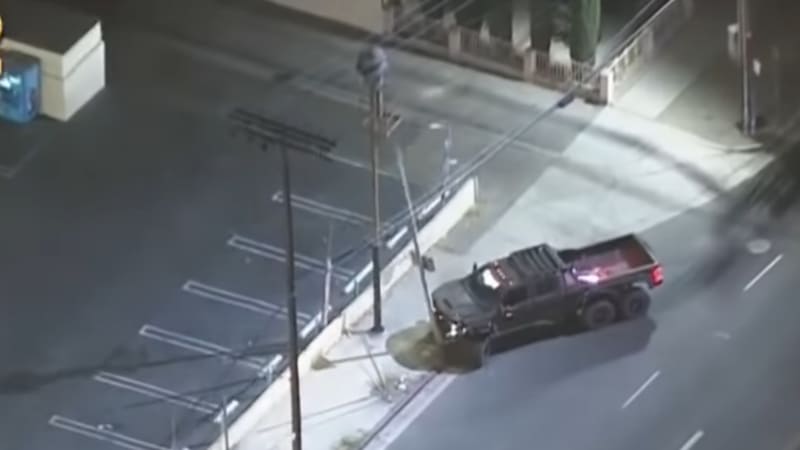 It’s going to be pretty hard to top the L.A.-ness of this story. Marshmello, a professional DJ that wears a giant foam marshmallow on his head, had his custom Ford F-550 6×6 Super Duty stolen from the service bay of a Los Angeles-area dealership. The suspect led police on a chase that ultimately came to an end when the truck crashed into a light pole as it emerged from a Taco Bell parking lot. Cue Randy Newman.

The confluence of celebrity, questionably modified cars, and police chases is so quintessentially L.A. and the details don’t get any less Los Angeles-y when filled in. According to the local CBS affiliate KCAL 9, a man riding a bicycle saw the truck in a service bay at Galpin Ford in Van Nuys, a dealership known for its own customs of questionable taste, and decided to upgrade his mode of transportation. CBS says the truck was later spotted — it doesn’t exactly blend in to traffic, apparently — driving erratically in Malibu, some 30 miles away. That’s when police gave chase.

So what are the pros and cons of using a lifted, six-wheeled, 600-horsepower truck to evade police? At one point, a Ford Crown Victoria Police Interceptor attempts to ram the F-550 at speed, which barely even feels it. On the other hand, it was foiled by its own lackluster turning radius and mediocre maneuverability when it helplessly plowed into the aforementioned lamp post like a runaway curling stone. We should also note, that while the reporter describes it as Hennessy VelociRaptor, it’s actually a different 6×6 custom built by Diesel Brothers.

The car thief gave himself up after the crash and was taken into custody. CBS says that as word spread that the $350,000 vehicle belonged to Marshmello, some arrived on scene and began to take photos, even though the DJ was nowhere in sight. Never change, L.A., never change.