Breaking News
Home / Racing / Can Arenas strike back in France?

Can Arenas strike back in France? 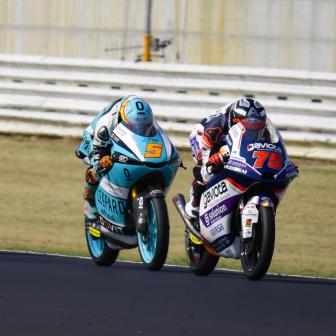 The battle at the front is never a three-way fight in Moto3™ though. Darryn Binder (CIP – Green Power) arrives as a Grand Prix winner and will want more of that, Tony Arbolino (Rivacold Snipers Team) is on a roll of form and closing in on the top, and Celestino Vietti (Sky Racing Team VR46) is only a further point back on his compatriot too. Barcelona also saw Romano Fenati (Sterilgarda Max Racing Team) retain his position in the front group after his win at Misano, and there was a resurgence for a few including his teammate Alonso Lopez, SIC58 Squadra Corse’s Niccolo Antonelli, Estrella Galicia 0,0 rider Sergio Garcia, Dennis Foggia (Leopard Racing) and teammate Jaume Masia… the list could go on, with more riders than can score points sometimes fighting it out in the front group, but that’s what makes Moto3™ such an incredible spectacle.