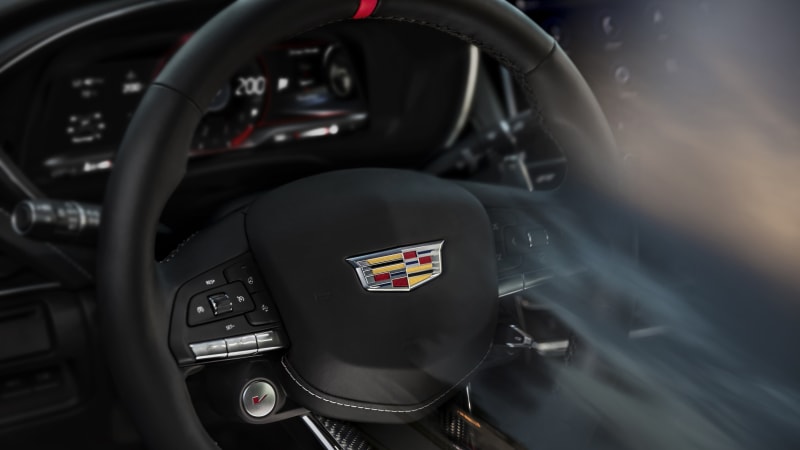 There’s quite a bit that we know about the upcoming Cadillac V-Series Blackwing models. Thanks to spy shooters and prototypes, we’ve seen the CT4-V and CT5-V Blackwing out and about testing on public roads, which means we’ve seen the bronze wheels in staggered sizes. We’ve been told they will offer proper manual transmissions, and we know they will lap a race track quicker than the ATS-V and CTS-V they replace.

And now we know what their steering wheels will look like. It’s not much to base an entire teaser on, but there are a few interesting tidbits we can glean from Caddy’s first official Blackwing tease. First, the wheel itself. It’s leather wrapped (not Alcantra, at least on this example), it looks to have meaty bulges where you’ll want to grip it, it has a red strip at the top to help locate straight ahead while driving aggressively, and it has a carbon fiber V-shaped spoke at the bottom. Finally, we see a prominent silver button labeled “V” on the left side that will allow drivers to quickly access V-Mode. To the right will be buttons for the Performance Traction Management system.

Judging by the fuzzy background behind the wheel that shows some sort of digital gauge cluster, it seems that Cadillac may be aiming for a 200-mile-per-hour top speed for the CT5-V. That’s not a stretch, as the last-generation CTS-V could hit that speed, too. Cadillac smartly took this shot in a way that blurs the center console, which means there’s plenty more time to speculate on the transmission choices.

Cadillac says the V-Series Blackwing models will be ready in time for the summer of 2021. Stay tuned.