BMW’s 3 Series Gran Limousine is the long-wheelbase version of the company’s 3 Series sedan. Elongated to give chauffeur-driven passengers more legroom in the back – just like the now-discontinued 3 Series GT – it is longer in beam, built on a stretched wheelbase and ideally suited for life in the Indian market.

So giving Indian luxury car owners more rear legroom clearly works. Question is, just how well will it work for BMW’s 3 Series; a car otherwise associated with greater driver engagement and driving pleasure? Will the longer wheelbase allow it to deliver the best of both worlds, or will stretching it dilute its unique driver focused DNA too much? Let’s get started.

On the face of it, and at first glance, the Gran Limousine (or G28 as it is known internally) looks very similar to the regular 3 Series (G20). In fact, look at it from the front and it’s almost impossible to tell the standard car from the longer wheelbase one. Some versions have more bling on the nose and others get a blacked-out centre section in the lower bumper; but these apart, the two are near identical when viewed head-on. 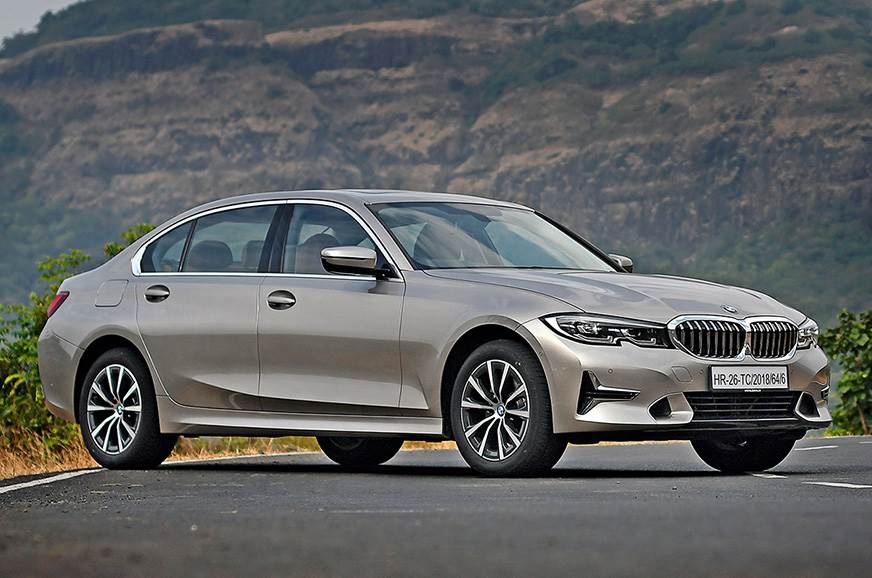 Longer rear doors and a streched wheelbase length are key visual differences between the standard 3 Series and Gran Limousine.

Look at it from the side, however, and the 110mm longer wheelbase and the longer rear doors stand out. BMW designers have done a good job when it comes to integration. The roof, though flatter now, blends nicely with the C-pillar, the long doors don’t look out of place, and even the overall stance of the car works well. In fact, if anything, the extra length adds a dash of elegance. And unlike Mercedes’ longer wheelbase E-Class, since the side graphic remains the same, there’s no interruption to the natural flow of lines. 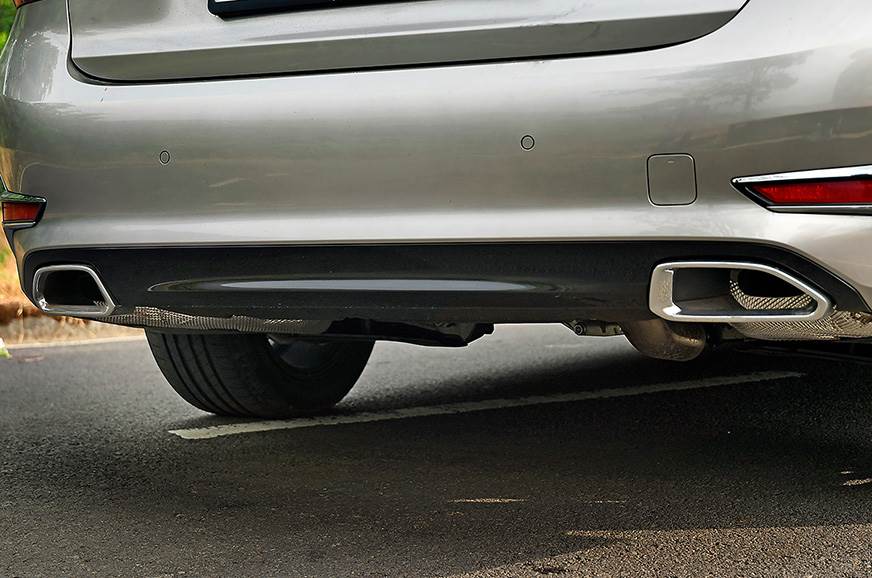 Long-wheelbase 3 Series gets rectanular exhuast pipes unlike the round ones on the standard car.

Identifying the Gran Limousine from the rear is relatively easier. The biggest giveaway is that the long wheelbase car gets rectangular exhaust tips, as against the round ones on the regular 3 Series and, get closer, and there’s the L badge.

When it comes to practicality, however, the boot isn’t too large at 430 litres. You do get a spare tyre, neatly concealed under the boot floor and a powered tail-gate too.

Designed and engineered primarily for the Chinese market, the right-hand drive version of the G28 is the first version of the car to go on sale outside of China. Measuring 4.819 metres in length, it is distinctly longer than regular 3 Series. The Gran Limo gets a longer roof, longer doors and a massive panoramic sunroof. Built on a stretched wheelbase, that measures 2.961 metres, BMW’s 3 Series Gran Limousine also has substantially more space for passengers in the back. To help with the less favourable ramp over angle, due to the longer wheelbase, the car has also been raised by 6mm, and to keep it in tune with the new more comfort-oriented character, BMW has also softened the suspension. As is the case with the long-wheelbase Mercedes E-Class, BMW is also likely to enjoy a cost advantage when it comes to importing components and parts for the car from its plant in China.

With its long rear doors, easy access and 43mm of additional legroom, the rear of the Gran Limousine is immediately welcoming. And settle into the seat and this 3 feels far more comfortable too. The seats are a bit softer and more filled out compared to the standard car, thigh support is as good as ever and you are sat at a good height. Also, since the seat is more contoured, it even holds you in place a bit better. The real ace in the pack, however, is the reclined backrest, which despite being fixed, seems to be set at just the right angle. And the new ‘fuller’ headrests and re-aligned elbow rest helps as well. 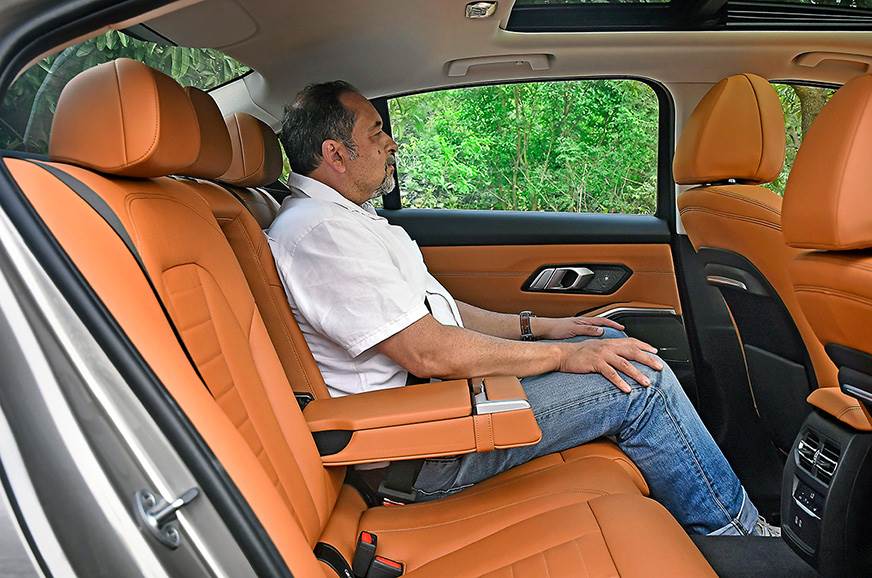 Space and comfort levels at the rear have improved considerably over the standard 3 Series.

The central tunnel is large and it does come in the way of the middle passenger, but the massive sunroof above brightens up the cabin considerably, and what makes it feel even roomier and more spacious is the fact that the long side windows are huge. BMW has even added strips of mood lighting on the seat-backs, and these strips connect nicely with those on the door pads. 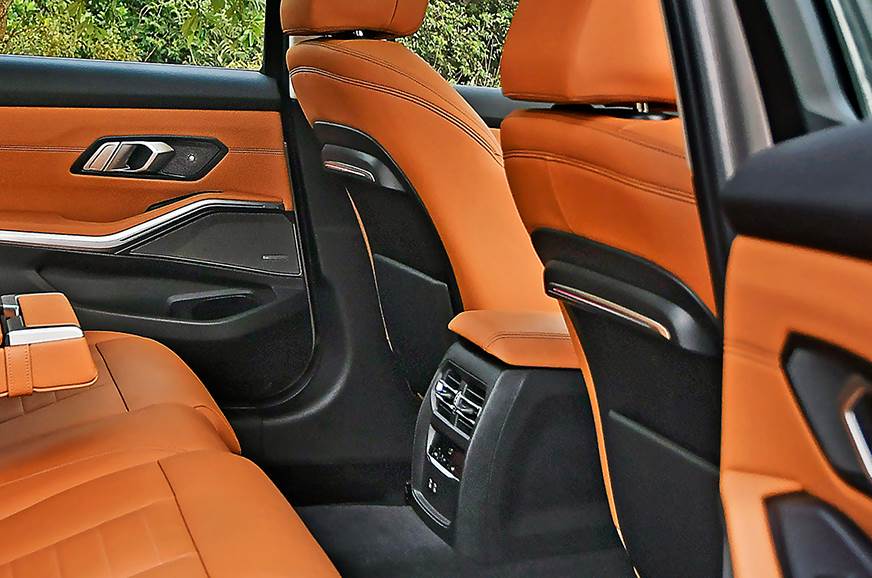 Ambient lighting strips not only on the rear door-pads but on the seat-backs as well.

Missing at the rear on the Gran Limousine, however, are blinds. There’s no rear blind, not even a manual one, there are no blinds on the side doors and then, despite this being the coolest time of the year, the air-conditioning had to work hard to cool the cabin.

Those sat up front will find few differences between the regular 3 Series and this long-wheelbase car. The supportive front seats are powered, you get extendable thigh support and finding the ideal driving position is easy. The open pore wood inserts on the dash aren’t polished as on the regular 3 Series and there are a couple of other small enhancements like acoustic glass and the new Cognac-coloured leather trim. 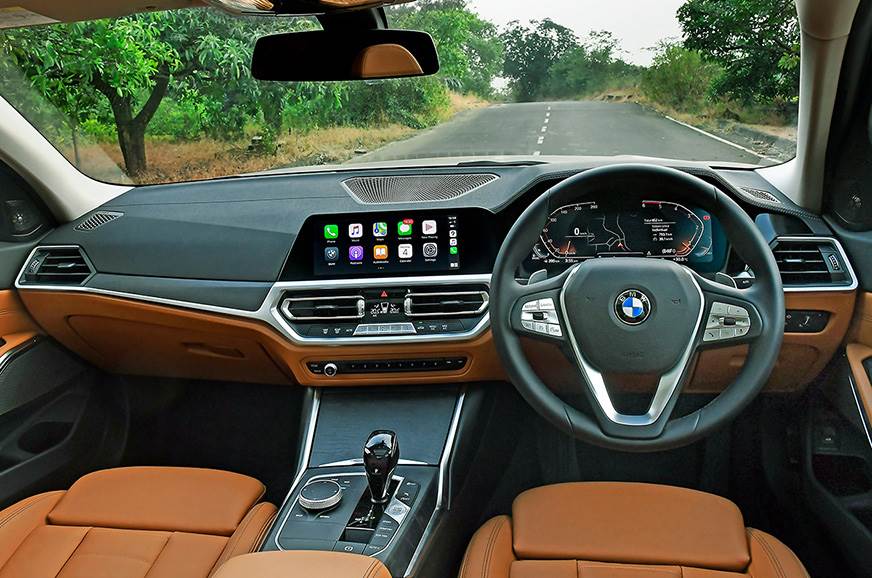 Other than new trim and a few enhancements, there’s not that’s much different in the front of the cabin.

The Gran Limousine, however, does get a bit more chrome on the dash and on the steering wheel, and you also get a more powerful and sweeter-sounding 16-speaker Harman Kardon audio system. Overall, you get a great blend of good quality and sharp design.

The iDrive system remains the best and the easiest to use of the lot, there is a large and very practical elbow box, and the digital instrument panel is sharp and bright. The latter isn’t easy to read, however, and quality on the panel that surrounds the gear lever isn’t great. 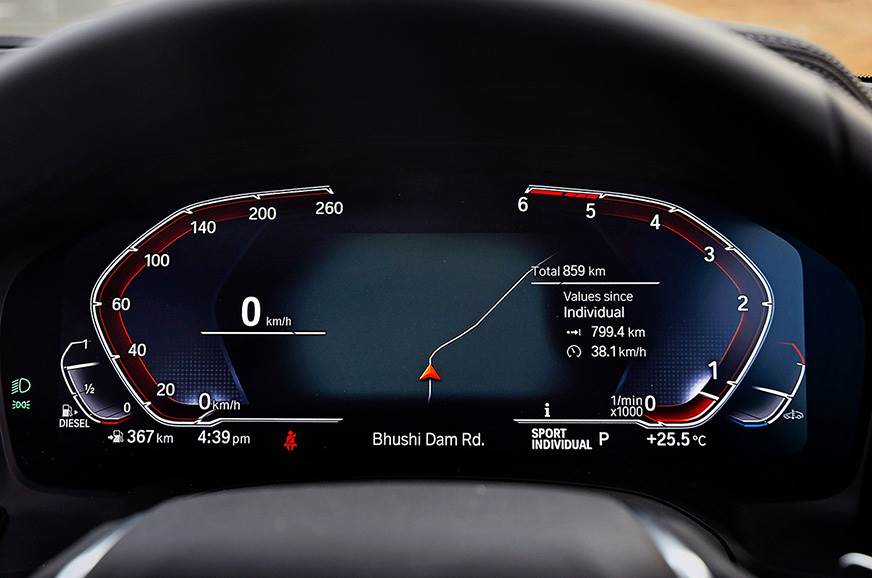 The instrument panel is sharp and bright but it isn’t easy to read.

At a later stage there will be an M Sport version as well on the 330Li (petrol) which will also get a heads-up display and gesture control, among other features. However, the Gran Limo doesn’t get cooled or massaging seats and there are no semi-autonomous driving modes either.

As soon as you are on the move, the effects of the longer wheelbase and the softer suspension are felt immediately. The suspension is clearly less busy than that of the regular 3 Series at low speed, there’s a suppleness here you only experience in larger, more comfort-oriented cars and then, even when the Gran Limousine hits a large bump, absorption is impressive. 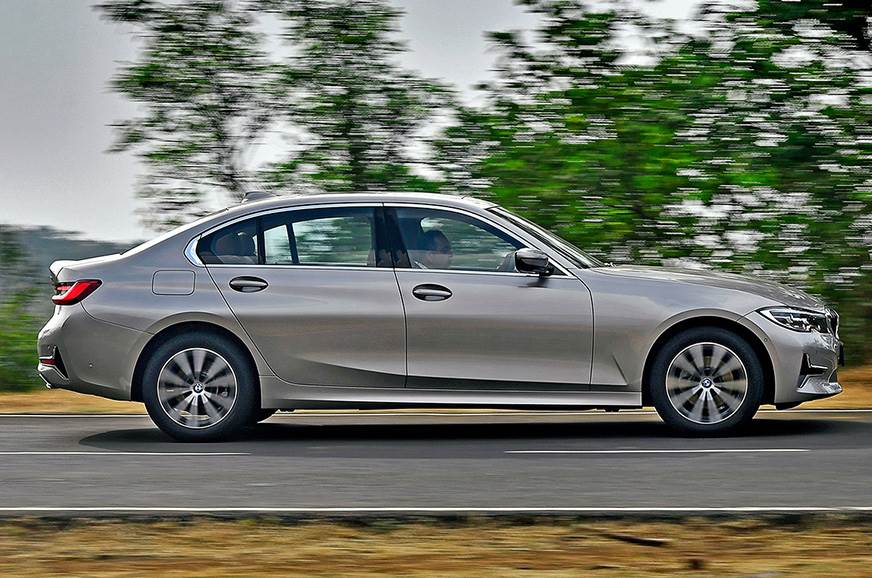 The long-wheelbase 3 Series also pitches very little on a bad road, and the generously profiled 225/50 R17 tyres also help with some of the secondary ride, allowing it to ride over small imperfections and coarse surfaces without too much adverse effect. 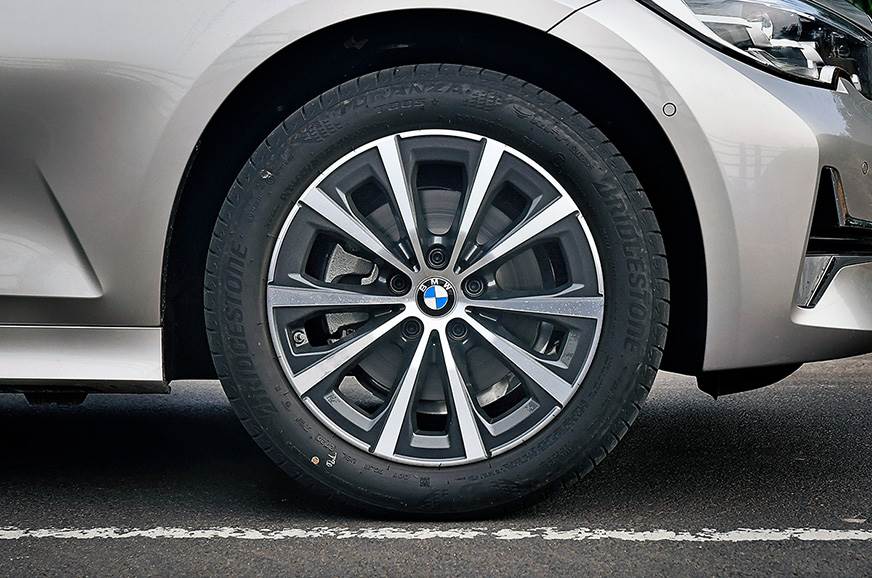 Despite being a diesel, the Bharat Stage 6-compliant engine is also very refined. Combustion is actually smooth and very hushed at low engine speeds and, till around 2,500rpm, it doesn’t even sound like a diesel. It does get a bit gruff when you pull it hard to the 5,000rpm redline (in manual and Sport) but that’s only to be expected. 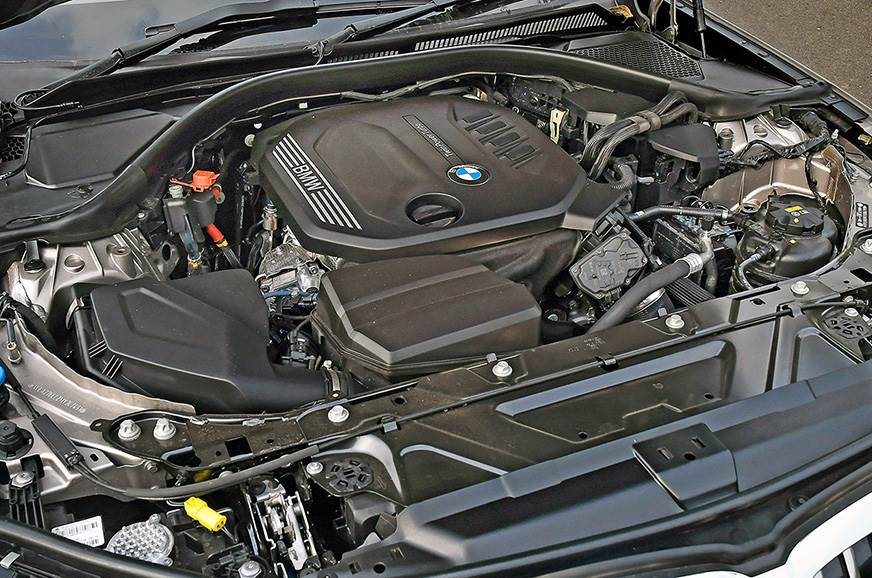 BMW’s 2.0 diesel engine on the 3 Series uses two sequential turbos instead of a single large one (it’s a twin stage unit) and this gives it a broader spread of power. In addition, what makes the performance feel more linear is that the Bharat Stage 6 tuning has made power delivery less spiky. With the smaller, first stage turbo spooling up quickly initial responses are very good and the engine responds smoothly to a tap on the throttle. Press down a bit harder and acceleration builds nicely too – the eight-speed ZF gearbox delivers the ideal balance between smooth, jerk-free transitions and quick shifts. Even flat out acceleration is quite impressive. The 320Ld, despite being 120 kilograms heavier than the regular 320d, does the 0-100 sprint in seven seconds dead, with 150kph coming up in 16.01 seconds.

The long-wheelbase 3 also feels extremely stable in a straight line. This is true both at medium and high speeds, with no real downside to the slightly raised and suppler suspension felt here. It doesn’t turn into corners with quite the agility of the regular 3 Series and there is more body roll, especially when you hurl it into corners. But this is only in comparison to the 3 Series; widely acknowledged as one of the best driving and most agile sedans around. 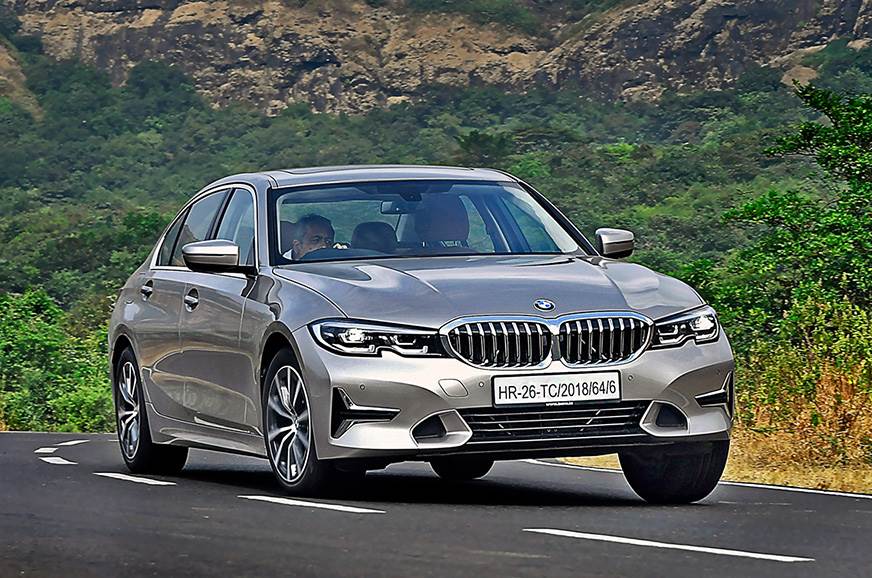 The Gran Limousine isn’t as agile as the standard 3 Series in the corners and body roll is more too.

The Gran Limousine actually feels more agile and on the ball than BMW’s erstwhile 3 GT, and it even drives better than many of the competitors in its class. Drive it in isolation, without driving the regular 3 Series back to back (as we did), and it even feels playful and confident enough to enjoy a spirited drive. That feeling of driving a long wheelbase car, that’s a bit reluctant to turn in, is just not there.

BMW 320Ld Gran Limousine: Should you buy one?

So can BMW’s 3 Series Gran Limousine deliver the best of both worlds and dominate its class like Merc’s long wheelbase E Class? It certainly delivers plenty of space and comfort in the rear, especially on that comfortably reclined back seat. And BMW has also focused on making sure the car rides well, only adding to the experience. Like most BMWs, the Gran Limousine also drives well. Despite the long wheelbase, it is fairly agile in corners, it is well-mannered at high speed, and steer it in a neat and tidy manner and it will even entertain you. It’s not as sharp to drive as a regular 3 Series, it could have been better equipped and at an expected price of Rs 51-54 lakh, approximately Rs 52.5 lakh for this car, the extra legroom will come at a premium. Still, what will work in BMW’s favour is that the Gran Limousine is likely to exert a strong appeal to the vast majority of predominantly chauffeur-driven Indian car buyers; owners who also drive themselves, and importantly look forward to enjoying the driving experience. Like the long-wheelbase E-Class, the BMW clearly has the potential to be a best-seller.

Cross-country drive in a BMW M8 Coupe: Fly Another Day

The future might be electric but at present it’s the Hyundai Kona Electric, MG ZS ...