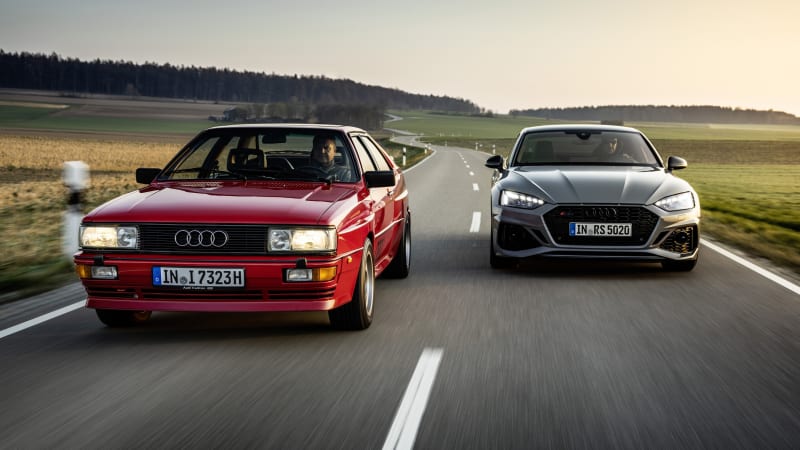 Audi’s heritage is rooted in front-wheel drive. DKW, one of the companies that merged to form Audi, began sending power to the front axle in 1931. It took an unplanned encounter with a little-known Volkswagen off-roader to make Audi an all-wheel-drive pioneer, and its well-known Quattro system turns 40 in 2020.

In the winter of 1976, engineers convened in a remote part of Sweden, far north of the Arctic Circle, to test prototypes in some of the harshest winter weather the planet has to offer. One of their technical support vehicles was a Volkswagen Iltis, a Jeep CJ-like off-roader developed largely for the military, which easily outperformed the front-wheel drive cars brought for testing purposes. It offered a generous amount of ground clearance, but Audi had no interest in putting a passenger car on stilts; AMC later took that route, though that’s a different story for a different time. Instead, the company began experimenting with ways to add four-wheel drive to its range.

Sending power to the four wheels was easier said than done, because the components available at the time were developed for hardcore off-roaders, so they were bulky and rather rudimentary. Audi spent years creating a system that was lighter, more refined, and more user-friendly than the one fitted to the Iltis. Its vehicle development team notably put a 10.4-inch-long secondary shaft in the transmission which simultaneously sent 50% of the engine’s power to the front and the rest to the back via a manually-locking center differential.

Audi called the system Quattro, which means “four” in Italian, and it chose to bring it to market in its highest-performance model. It presented the five-cylinder, 200-horsepower Quattro at the 1980 Geneva Motor Show, and began racing the coupe in the World Rally Championship (WRC) during the 1981 season. Michèle Mouton, Hannu Mikkola, Stig Blomqvist, and Walter Röhrl won 23 races through the 1985 season, allowing Audi to win the Manufacturer’s Championship in 1982 and 1984. Engineers knew the system they developed to win races in the hotly-contested Group B category could also give ordinary motorists better traction on slippery surfaces, so they gradually put Quattro in other members of their range, like the 80, which the A4 traces its roots to.

All-wheel drive is now a household term, one even non-enthusiasts are familiar with, but in the 1980s it was often dismissed as a superfluous extra. Audi needed to inform motorists, and it decided to show, not tell. In 1986, it sent rally driver Harald Demuth to Kaipola, Finland, and asked him to drive up a 154.2-foot-long ski jump at an 80% angle in a 100 CS Quattro. He did it, and made it look easy. Audi filmed the stunt from several angles and turned it into a commercial, which we’ve embedded below. Suddenly, everyone was talking about Quattro.

It consequently didn’t take long for Audi’s rivals to pay attention to Quattro. BMW made all-wheel drive available on the 325i (E30) in 1985, and later in the United States, while Mercedes-Benz introduced 4Matic in 1987 on the 260E and the 300E (W124), though the system was temporarily discontinued between 1993 and 1998.

In the 1990s and the 2000s, Quattro stood for both performance and all-weather traction. Hot-rodded models like the RS2 released in 1994 and the first-generation R8 launched in 2007 were exclusively offered with the system. It continued winning races, too; Audi dominated the 1989 IMSA GTO series with the 720-horsepower 90 Quattro, and the R18 prototype won the 24 Hours of Le Mans three times in a row between 2012 and 2014. The system got smarter, too, as electronics entered the equation, and it spread across the company’s lineup.

As of 2020, every member of the Audi range is available with Quattro, with the exception of the entry-level A1 not sold in the United States. The company has manufactured nearly 11 million all-wheel drive cars since 1980.

Audi took its Quattro system into zero-emissions territory for the first time when it introduced the E-Tron in 2018. Instead of clutches and differentials, the system consists of a pair of electric motors each assigned to one of the axles. It’s a configuration that delivers through-the-road all-wheel drive, and one that we’ll see more of in the coming years. The E-Tron GT due out later in 2020 and the Q4 E-Tron expected to make its debut during the first half of 2020 will both be available with through-the-road Quattro, and they’re just two of the 20 electric cars the company plans to introduce by 2025. Gasoline-electric hybrid models are on its product roadmap, too.

Increasing traction and performance is as straightforward as adding more motors to the drivetrain, a solution which the E-Tron S launched earlier in 2020 illustrates well. Its front motor generates 201 horsepower, and its rear wheels are zapped into motion by two motors that each develop 177 horsepower. Combined, the S puts 429 horses and 596 pound-feet of twist under the driver’s right foot, though an overboost function increases those figures to 496 and 718, respectively, for eight-second bursts. But while creating a four-motor powertrain is technically possible, Audi told us in-wheel electric motors land outside of Quattro’s boundaries.

“If you want to have driving dynamics, if you want to have 100% Quattro and emotion in a car, then you want to have as little unsprung mass as possible. So, therefore, the wheel hub motor is not something that does justice to our legacy,” Marc Baur, Audi’s project manager for electric torque vectoring, told Autoblog.