The next-generation Acura MDX is here, almost. This three-row crossover you’re looking at is technically being called the MDX Prototype by Acura, but it’s about as close to production as any prototype can get.

And what a looker it is. Acura has followed up the slick TLX sedan with another attractive design. With the MDX now the best-selling Acura nameplate of all time, this one was even more important for Acura to get right. Just like the TLX, it benefits from a much longer dash-to-axle dimension, measuring in six inches longer than the outgoing MDX. The pentagon grille, and Chicane-shaped DRLs in the headlights now grace a much wider car. Acura gave this MDX a wider track and a three-inch longer wheelbase, both aiding in making it appear far more graceful and sporty.

Acura clearly isn’t holding much of anything back with this MDX Prototype versus the final production car, and we’re liking what we can see so far. Many of the design elements we liked so much on the TLX are transferred over to this crossover body style, and Acura has done so with class. 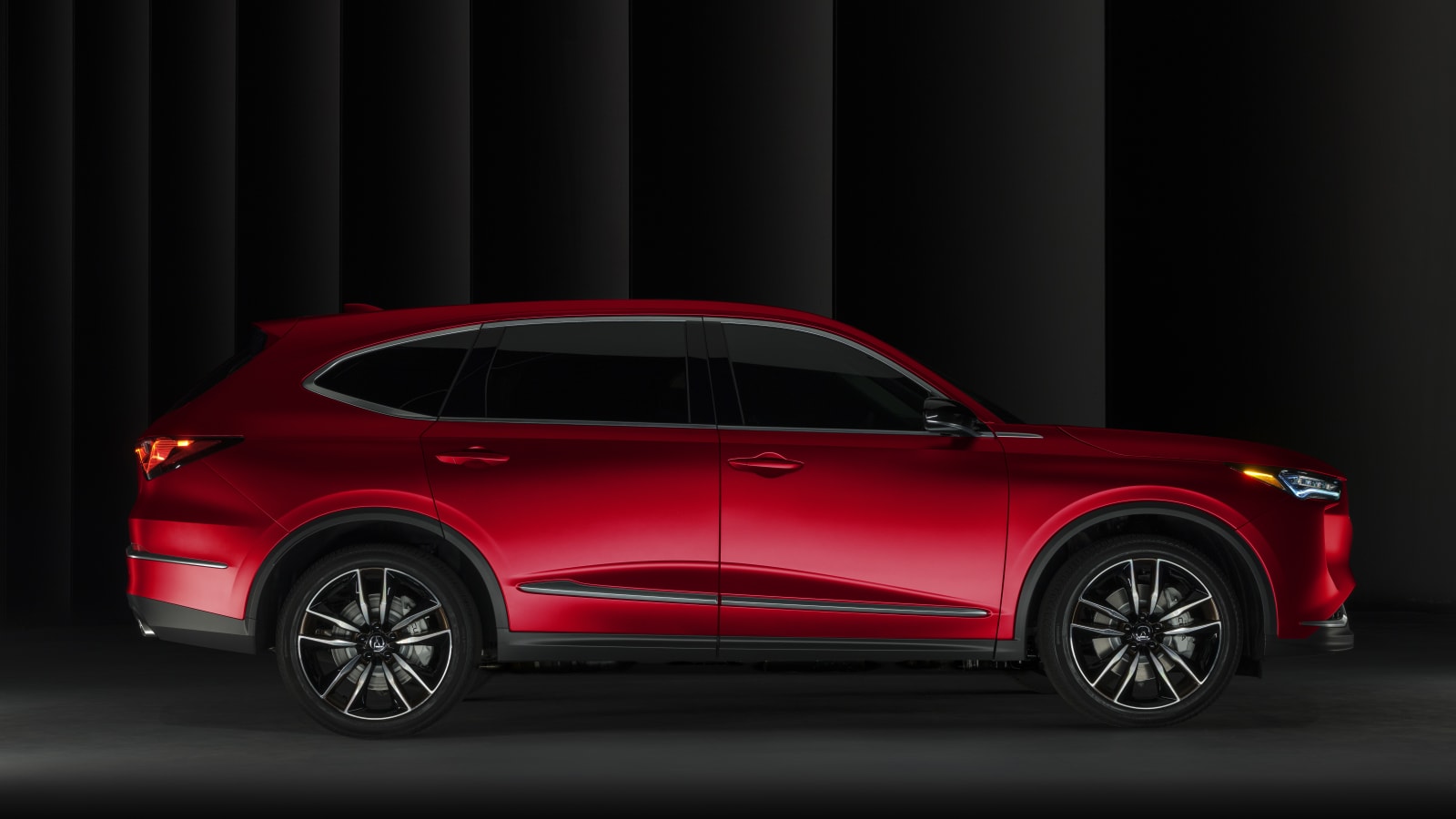 The MDXs you see here are riding on new 21-inch wheels that are bolted up to a new light truck platform and chassis specifically tailored for the MDX. Acura says it provides for more athletic handling, greater ride comfort and a quieter cabin versus the outgoing MDX. It’s even more rigid than the RDX’s body. Just like the new TLX, Acura has gone with a double wishbone front suspension design to make the MDX an even sportier driver.

There’s more excitement in the powertrain options for the new MDX, too. Acura promises a Type S version of the MDX is coming with the same 3.0-liter turbocharged V6 you’ll find under the hood of the TLX Type S. It will make 355 horsepower and 354 pound-feet of torque (same as the TLX) in this application. The standard engine will continue to be Acura’s 3.5-liter V6 that makes 290 horsepower and 267 pound-feet of torque. Both engines will be mated to Acura’s 10-speed automatic transmission and send power to all four wheels using the latest fourth-generation SH-AWD system.

Not all of the performance details are available yet, but Acura says the MDX can be had with four-piston Brembo brake calipers and comes with a drive mode selector that allows you to adjust ride, handling, steering, suspension and powertrain characteristics. More Type S-specific details will need to wait.

The interior matches the exterior for flair and elegance. We’ve already seen some shadowy images of the MDX’s cabin, and we’re even more impressed with the interior shown here. The upright instrument panel design that is festooned with tech and flashy materials is a great sight to see for Acura. This car’s outgoing interior just didn’t live up to the Acura name and luxury price, but that’s all changed now. 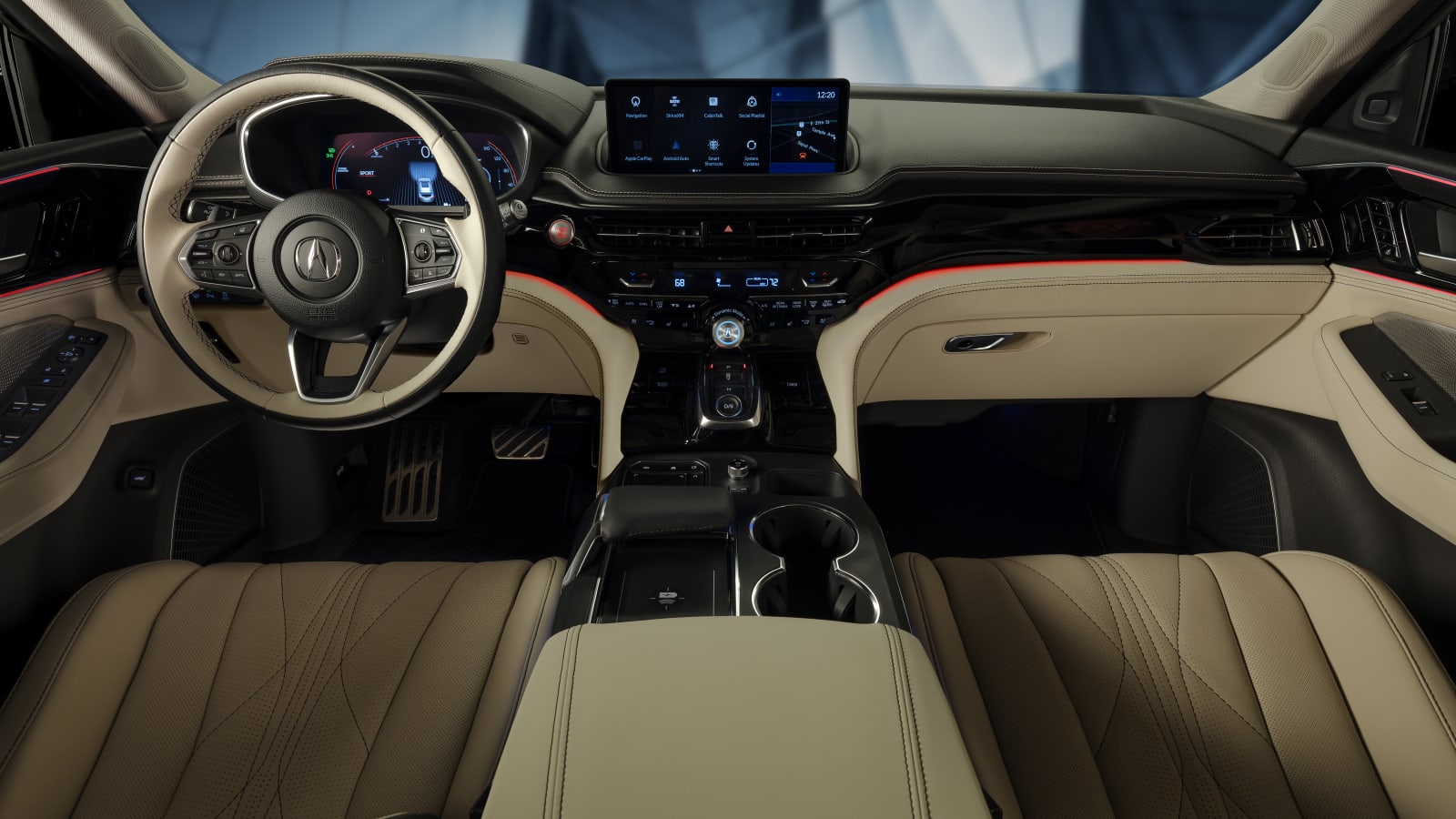 We like the open-pore wood that’s been infused with metallic flake, French stitching, contrast piping and quilted leather in all three rows. Acura says that all three rows get more legroom this year, and first and third rows get more headroom. A new panoramic moonroof should make the cabin even airier for rear occupants, too.

Tech takes a big step forward in this MDX. Acura is debuting a new 12.3-inch digital instrument cluster for the 2022 MDX (Acura says it’s skipping model year 2021) that replaces the physical gauges from before. The infotainment system is the same True Touchpad Interface we saw in the RDX and TLX, but the screen has been enlarged to 12.3 inches in the MDX. It also gets a new CPU for improved performance. Acura is continuing to feature ELS audio for its premium stereo systems, too. The big ticket system in the MDX is an ELS Studio 3D setup with 25 speakers and 1,000 watts of power. Six of those speakers are in the car’s ceiling.

Taking the tech one step further, the MDX gets new 16-way power seats with massage functionality. There are nine massage modes to choose from for the two front passengers. Acura has also integrated a new ambient lighting system into the MDX, letting owners choose from 27 different lighting themes/combinations. Safety tech is almost a given for Honda and Acura, but it’s good to hear that the MDX will come with AcuraWatch’s suite of driver assistance technologies. It also features the same new airbag technology first revealed in the TLX.

Acura still has more details to reveal about the MDX, but we can expect those closer to the production model’s official reveal. The standard 2022 MDX will arrive in dealers next year, and the Type S will follow in summer 2021. Prices will be released closer to the on-sale date.

A 12.0-Inch Screen Comes to the Midsize SUV

Mitsuoka, one of Japan’s most eclectic tuners, can’t resist the market’s shift towards crossovers and ...