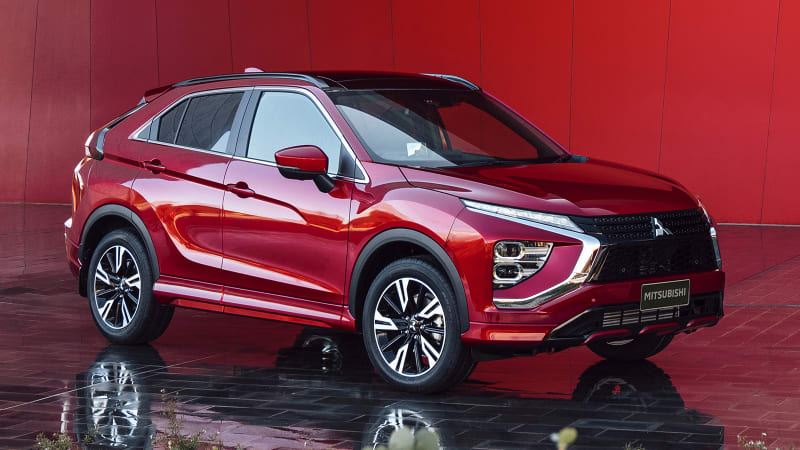 As expected from spy shots, the 2022 Mitsubishi Eclipse Cross has received a styling refresh, and it changes the somewhat controversial rear end. It also brings some tweaks to the infotainment, and for markets outside the U.S. a plug-in hybrid.

The big exterior changes are at the back. The Aztek-style split rear window is gone for a conventional single one. The taillights no longer bridge across the middle of the hatch. They do still extend up the rear pillars. The shape of the hatch looks a little different, too, and it helps reduce the stubby look of the Eclipse Cross’s tail.

From the front and sides, the new Eclipse Cross doesn’t seem particularly different. But looking closer, you may notice that the upper lamps are slimmed down and given a steeper angle. They also appear to simply be daytime running lights, while the now larger lower lamps take over actual illumination duty. The main grille is also thinner.

On the inside, the main change is to the infotainment system. The screen has grown to 8 inches over the old 7-inch system, and now features a new graphic interface and physical volume and tuning knobs. Not only that, it ditches the touch pad in the center console, opting instead for touchscreen interactions exclusively. To aid this, the screen also sits closer to the front occupants.

Mechanically, U.S.-spec Eclipse Cross models are unchanged. They continue to get the turbocharged 1.5-liter four-cylinder making 152 horsepower and 184 pound-feet of torque. It’s paired with a CVT and front- or all-wheel-drive. For other markets, Mitsubishi will introduce a plug-in hybrid variant. Details for that will come later, but won’t be especially relevant for the U.S., as the company said it has no plans to bring it here. Considering the availability of the Outlander PHEV in America, this seems like an odd decision, but perhaps Outlander PHEV sales haven’t been strong enough to merit another PHEV model.

The redesigned Eclipse Cross will go on sale in the first quarter of 2021. Pricing has not been announced, but expect it to stay close to the current car’s base price of $24,190.

Last year, Chevrolet Performance gave us a glimpse at the future of electric conversions with ...