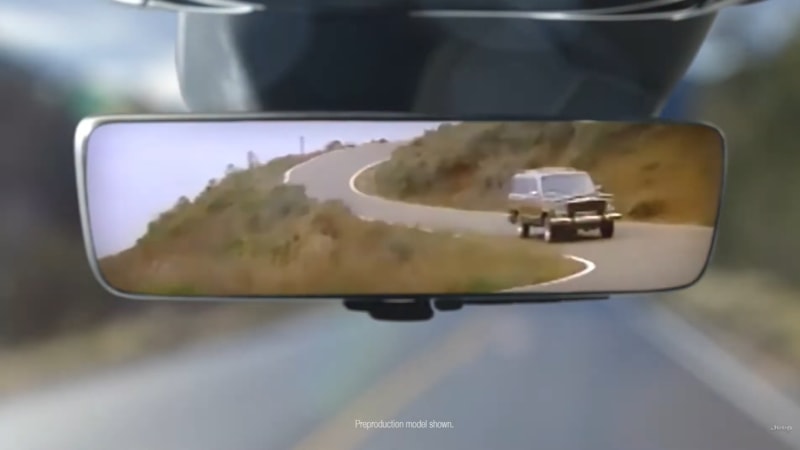 Jeep is about to resurrect the Grand Wagoneer after a long hiatus, and it released a preview video to announce the third-generation model will be much more high-tech than its predecessors. It’s tentatively due out for 2022.

Posted on the firm’s official YouTube channel, the 15-second video begins with footage of the original Grand Wagoneer made between the 1984 and 1991 model years. As the camera zooms out, the flick shows the 9.2-inch digital rear-view mirror that will be offered on the upcoming 2022 model. We don’t know whether the feature will be standard, or if it will be found on the list of extra-cost options, possibly bundled into a technology package.

“The only thing more grand than yesterday’s adventures are tomorrow’s,” the video concludes. While we’ll have to wait to find out which Wagoneer is the grandest, it’s clear Jeep will pack all of the technology features in its arsenal into the Grand Wagoneer, which it will position at the top of its range as its flagship model. And, while the idea of a luxury Jeep might sound odd, keep in mind many historians call the Wagoneer the first luxury SUV.

Earlier preview images released by the company show a chromed emblem, which will likely be found on the doors, and an engine start/stop button surrounded by leather upholstery held together with upmarket-looking stitching. Peeking under the body will reveal a frame, mechanical components (including six- and eight-cylinder engines), and an independent rear suspension borrowed from the Ram 1500. The 6.2-liter Hellcat V8 theoretically fits behind the Grand Wagoneer’s grille, though whether it will get a 707-plus-horsepower option is up in the air. If you’re wondering: it fits neatly in the original model, too.

Jeep will introduce the Grand Wagoneer in the coming months, and we expect it will begin arriving in showrooms in the spring of 2021 as a 2022 model. Production will take place in the same Warren Truck Assembly, Michigan, factory that builds the 1500. Additional details (like whether the wood-look paneling that characterized the first two generations of the Grand Wagoneer will return) will emerge before the end of 2020.

2020-08-19
admin
Share
Previous Six in a row for Ducati?
Next Watch a sinkhole in China swallow 21 vehicles