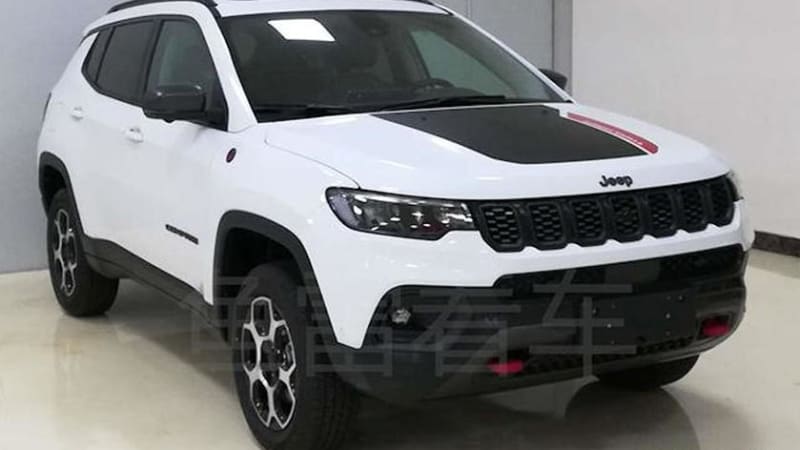 Jeep is preparing to give the Compass, one of its smallest and most affordable models, a series of updates outside, inside, and under the hood. It’s not expected to unveil the model until early 2021, but images taken in China give us an early look at what to expect when the revamped Compass makes its official debut.

Spotted by CarBuzz, the photos look like they were snapped at a Jeep facility across the Pacific, and they show two variants of the crossover. Both wear a new-look front end characterized by slightly sharper lights, a grille that’s a little bit taller, and a redesigned lower bumper. Stylists again gave the off-road-oriented Trailhawk model a trim-specific front end with a shorter bumper that increases the approach angle. Out back, the modifications are seemingly limited to lights that look slightly darker, and the Trailhawk loses its red tow hook.

Jeep refrained from making significant design changes to the Compass, though keep in mind it also builds the crossover in Guangzhou, China, through a joint venture with the state-owned carmaker GAC. We’re not ruling out the possibility that the model shown in the images will be exclusively sold on the Chinese market, but the aforementioned changes are aligned with the fully camouflaged prototypes we’ve spotted testing in Detroit.

While interior images were not leaked, we’ve learned the Compass will get an updated interior with a tablet-style touchscreen mounted high on the dashboard. It will run the latest generation of the Uconnect infotainment system. Other minor changes (like trim revisions and new-look gauges) will likely be on the roster, too, but we’re not expecting a complete overhaul.

Here’s a slideshow of the current design for comparison:

What remains to be seen is what’s hiding under the nip-and-tucked sheetmetal. We’ve previously speculated the turbocharged, 1.3-liter four-cylinder engine already offered in the Renegade will make its way to the Compass. It’s rated at 177 horsepower and 210 pound-feet of torque in the firm’s entry-level model, and it’s bolted to a nine-speed automatic transmission. In the Renegade, it’s offered as an upgrade over the 2.4-liter four.

Across the pond, Jeep introduced a plug-in hybrid variant of the Compass named 4xe earlier in 2020. The system teams the 1.3-liter four with an electric motor mounted over the rear axle and an 11.4-kilowatt-hour lithium-ion battery pack that shares a compartment with a fuel tank made smaller to clear up space. Jeep still hasn’t revealed whether the 4xe-badged Compass will be sold in the United States, the only plug-in hybrid model it has announced for us so far is the Wrangler, but the technology could reach our shores sooner or later.

We expect official details about the 2022 Compass will emerge in the coming months, and sales will start during the first half of 2021. Pricing won’t stray far from the current model‘s, which starts at $23,895.

2020-11-10
admin
Share
Previous The Original Fast & Furious Was This 1924 Silent Film, Which You Can Watch In Its Entirety Here
Next Andrea Iannone receives four-year ban after losing appeal