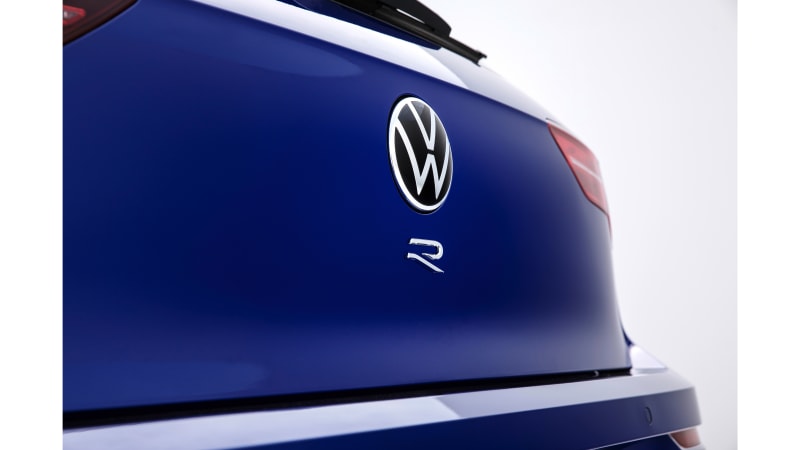 Update: VW released another teaser photo showing the rear hatch of the Golf R. It reveals the new “R” logo placement directly under the VW logo. The hint of a rear spoiler is visible at the top of the photo, too. Everything else will have to wait for the car’s proper reveal scheduled for November 4. Our original Golf R reveal announcement story follows below.

We may not be getting the VW GTI Clubsport that was just revealed, but we’re going to get something even more potent: the 2021 VW Golf R. And we apparently don’t have to wait long to see the monster Golf.

Racing driver and former Top Gear America host Tanner Foust shared a teaser video on Twitter announcing the reveal date of the Golf R. It will be shown on November 4. Sadly, the trailer reveals very little of the car except the headlights, which are simply shared with the GTI and other eighth-generation Golfs. Strangely, more of the trailer is spent showing the European T-Roc R.

We have seen plenty of spy photos of thinly disguised Golf Rs, though. Unsurprisingly, it’s subtly more aggressive than your run of the mill Golf. It also distinguishes itself more from the GTI than the previous generation. The new GTI has a hexagonal mesh pattern and fog lights all through the lower bumper. The Golf R, on the other hand, ditches the mesh for simple slats and has two solid sections dividing up the bumper air inlets.

As for power, reports have suggested two versions of the R. The base one will make 328 horsepower, 40 more than the U.S.-spec version. Above that could be a Golf R Plus making nearly 400 horsepower. All-wheel drive will almost certainly return, though the R may only be available with a dual-clutch automatic this time around.

2020-10-30
admin
Share
Previous It Hurts to Watch Rimac Crash Test Its $1M C_Two Hypercar Prototypes
Next When and where to watch the European GP?