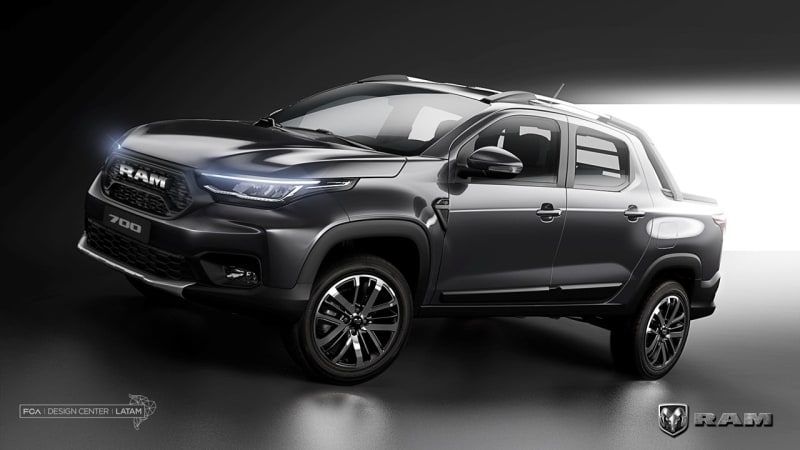 Ram’s on-again, off-again sub-1500 pickup is allegedly on its way to production, but we haven’t seen it yet. In the meantime, the company’s Mexican division introduced a trucklet named 700 built on a unibody architecture.

The 700’s positioning suggests it picks up where the Dakota left off, but it’s a completely different breed of truck. And, while its unibody bones are reminiscent of the Honda Ridgeline, it’s a much smaller model that’s essentially a badge-engineered version of the Fiat Strada. No, not the hatchback briefly sold in the United States from 1979 to 1982; we’re talking about the little, economy car-derived pickup sold in dozens of global markets.

Think of the 700 as the Dodge Rampage‘s distant heir. Visually, its front end borrows a handful of styling cues from the 1500, including an upright grille characterized by a bold Ram emblem and mesh inserts. Called SLT, the base model wears a decidedly downmarket look with black plastic bumpers and steel wheels covered by plastic hubcaps. The mid-range Big Horn blurs the line between a commercial vehicle and a crossover with a practical cargo box, while the range-topping Laramie variant is aimed at motorists who want an outdoorsy daily driver.

Ram offers two- and four-door models, though only the SLT is available in the former configuration. The 700 boasts a usable 1,653-pound payload and an 880-pound towing capacity.

Power comes from a 1.4-liter four-cylinder engine that sends 84 horsepower to the front wheels via a five-speed manual transmission. Buyers can pay extra for a turbocharged, 1.3-liter four that delivers 98 horsepower. It doesn’t appear that four-wheel drive is available, and there’s no automatic transmission on the menu.

Small and cheap doesn’t necessarily mean basic. The 700 can be equipped with a seven-inch touchscreen with Android Auto and Apple CarPlay compatibility, a rear-view camera, and electronic driving aids such as ABS brakes and traction control, plus LED headlights. Laramie models also benefit from partial leather upholstery.

Ram will release the 2021 700 in the Mexican market this month, but we’re not expecting the model to find its way north to the U.S. Drivers who want a small, unibody truck will need to wait until Ford releases the Maverick, which will ride on the same basic platform as the Escape and the Bronco Sport. It’s tentatively due out in 2021 as a 2022 model.