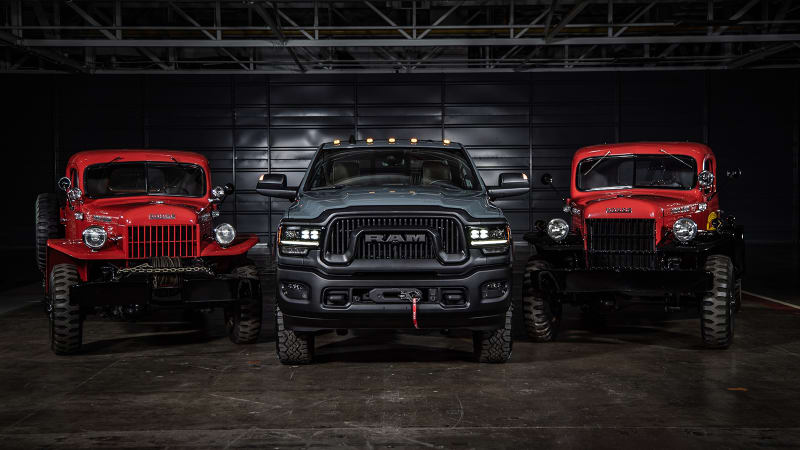 The Ram Power Wagon has made a name for itself in this century as the ultimate heavy-duty off-road pickup truck. But the name has a much longer history than that. The first Power Wagon went on sale in 1945, and was based on large military trucks built by Dodge during World War II. That’s 75 years ago this year, hence the reason for the 2021 Ram 2500 Power Wagon 75th Anniversary Edition you see here.

Squeaking in just in time for the civilian truck’s anniversary, this special edition Power Wagon gets some visual tweaks and is loaded up with various features. On the outside you’ll find standard premium LED headlights with black trim that matches the black decals and rock rails. The unique grille gets a gunmetal Ram badge and the rear doors have black 75th anniversary badges. Beadlock-capable wheels with the usual 33-inch tires round out the exterior styling.

Inside, the most prominent change is the addition of brown leather seats with 75th anniversary logos in the seat backs. Dash and door trims feature gloss black plastic and brushed aluminum. The 12-inch infotainment screen is fitted and features the new-for-2021 off-road pages that display ride height, pitch and roll, and auxiliary gauges. The infotainment system is also coupled to a 750-watt, 17-speaker sound system.

The special edition Power Wagons will reach dealers by the end of the year. Pricing starts at $66,945 with destination.