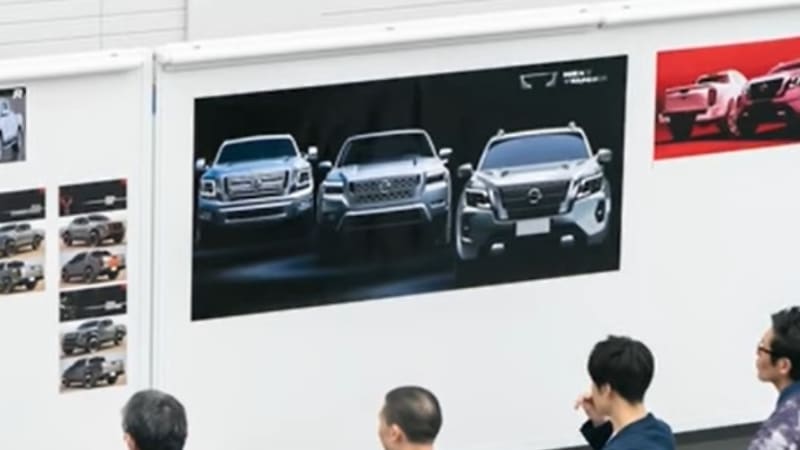 Nissan is finally preparing to replace the Frontier. It’s not ready to show the truck yet, but it subtly gave us an early look at it by concealing its front end in a design presentation about the updated global-market Navara.

Spotted by Motor1, the image briefly appears in a 15-minute video published on YouTube by Nissan’s Mexican division. Above all, it confirms the Navara sold overseas and the Frontier sold here will not look anything alike.

Although the sketch isn’t labeled Frontier, it shows a front end that lines up well with the camouflaged prototypes we’ve spotted testing in recent months. Stylists took the truck in a bolder, more upmarket direction by getting rid of the current-generation model‘s U-shaped grille insert, adding a generous serving of chrome, drawing rectangular lights, and giving it a more sculpted hood. Remember, the Frontier shown in the sketch is likely well-equipped variant, and more basic versions will receive a decidedly less sophisticated appearance.

Nissan gave us another glimpse at the 2021 Frontier when it previewed all of its upcoming cars in May 2020. Shrouding the truck in darkness couldn’t hide its boxy silhouette and its brawny lines. We think two- and four-door models will again be offered, and both versions will be slightly bigger than their respective predecessors. Like rival Toyota, Nissan will put a bigger focus on leisure-oriented trims than on construction site-spec trucks because that’s what a majority of buyers want (an SUV with a cargo box), and that’s where the fattest profit margins are.

Inside, the next-generation Frontier will receive a four-spoke steering wheel, a modern touchscreen for the infotainment system, and better materials. We’ve even seen contrast stitching in a handful of pre-production prototypes, which signals Nissan is serious about luring a wide range of buyers away from the competition.

Power for the 2021 Frontier will come from a new 3.8-liter V6 rated at 310 horsepower and 281 pound-feet of torque. Inaugurated by the current-generation Frontier for the 2020 model year, the six-cylinder will be bolted exclusively to a nine-speed automatic transmission. It doesn’t sound like a six-speed manual will be available. Rear-wheel drive will come standard, and four-wheel drive will be offered at an extra cost.

Nissan will introduce the 2021 Frontier in the coming months; we might even see it in the metal before the end of 2020. Sales will begin during the first half of 2021, and pricing will likely start in the vicinity of $27,000.