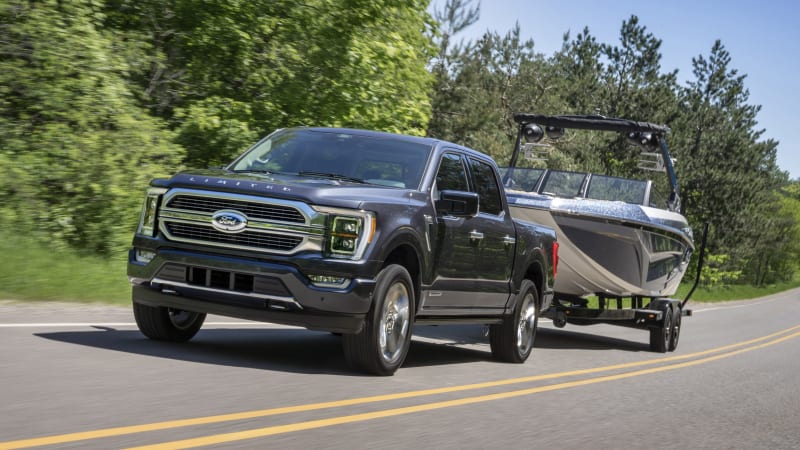 Ford confirmed the new 2021 F-150 will be offered with hands-off driving technology. Upmarket trim levels will be available with Co-Pilot 360, a suite of electronic driving aids that includes a feature called Active Drive Assist.

Already announced for the electric Mustang Mach-E, the Active Drive Assist feature will allow drivers to take their hands completely off the steering wheel when they’re traveling on the roughly 100,000 miles of American highways that Ford has mapped. It relies on camera- and radar-based technologies to keep the truck centered in its lane and traveling at a pre-determined speed; think of it as adaptive cruise control meets lane-keeping assist. It does not turn the F-150 into a fully autonomous car, and motorists will be required to keep both eyes on the road at all times. They will be monitored by a driver-facing camera that tracks their head and eye movements.

Ford told Autoblog that early F-150 buyers will either get the hardware that powers Active Drive Assist standard by ordering a top-of-the-line Limited model, or they’ll be able to add it to a Lariat, a King Ranch, or a Platinum trim for $895 once the company deducts a $100 early adopter incentive. They’ll then need to spend $600 to purchase the software, which they’ll receive via an over-the-air software update when it’s ready in the third quarter of 2021. At that point, the hardware and the software will be packaged together, and the bundle will cost $1,595.

Regardless, the Active Drive Assist feature will come with a three-year service period. Ford told Autoblog that, after that, “customers can choose to continue with it and get map updates with more hands-free driving zones by paying a competitively-priced monthly service cost.” Those that don’t opt in will presumably no longer be able to enable the hands-free driving feature. Full details will be announced in the coming months.

2020-10-30
admin
Share
Previous What Current Car Is Guaranteed to Be a Future Classic?
Next 2021 Dodge Challenger, 2020 Land Rover Defender, V-8-powered Bronco: The Week In Reverse