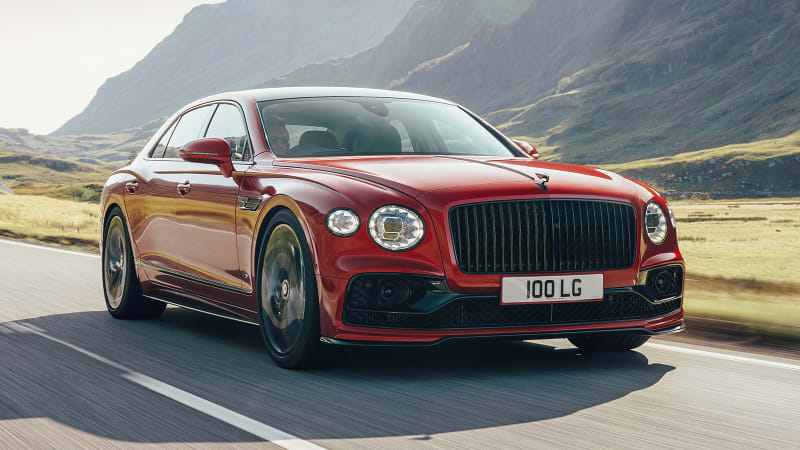 Following up on the launch of the W12 version, the 2021 Bentley Flying Spur is once again getting an “entry-level” variant with a V8. It’s not as powerful as the W12, and a couple fancy features aren’t included. But it’s lighter, more fuel efficient, and we expect it will be cheaper.

Like past V8 Spurs, this new model has a twin-turbocharged 4.0-liter V8. It’s more powerful than its predecessors, though, making 542 horsepower and 568 pound-feet of torque. The previous-generation V8 S made 521 horsepower and 502 pound-feet of torque. The W12’s 626 horsepower still towers over the V8, but the V8 boasts a weight savings of 220 pounds. Combined with cylinder deactivation, Bentley claims a 16% improvement in fuel economy, though doesn’t give specific numbers. Applying that increase to the W12’s combined fuel economy number, we’d expect around 17 mpg for the V8 versus 15 for the W12.

There’s one other key mechanical change to the Flying Spur V8, and that’s the lack of standard electronic adjustable anti-roll bars and four-wheel steering. Both features are part of an option package now, whereas they’re included on the W12. The adjustable anti-roll bars are automatically controlled to optimize ride quality while reducing body roll, and the steering allows the Flying Spur to more easily negotiate tight corners and spaces.

Otherwise, the V8 Flying Spur is nearly identical to the W12 version, save for the standard 20-inch wheels and quad exhaust tips. It’s available in either four- or five-seat configurations. First Edition and Blackline trims are available that include extra options and unique visual tweaks. And among some of the more opulent upgrades are the rear-seat refrigerator, illuminated Flying B hood ornament and rotating center stack display.

2020-10-15
admin
Share
Previous A Guy In A Jetpack Was Spotted Again By Airliners Descending Into LAX. We Have The Audio.
Next Bettenhausen 100 Entry List Features 32 Cars