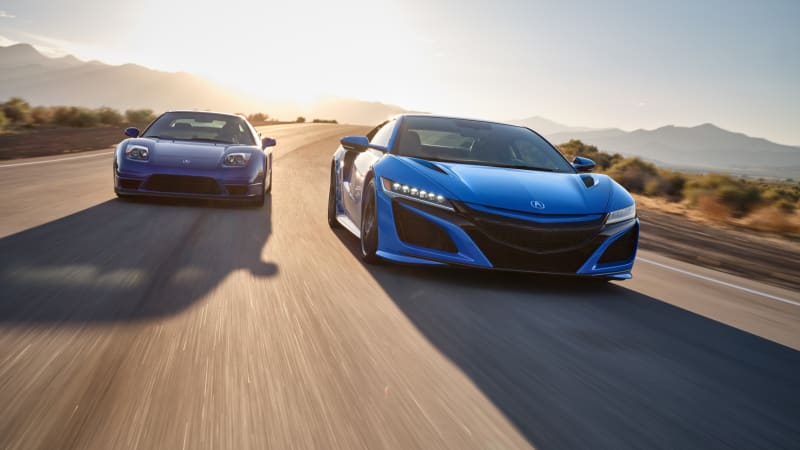 Acura announced it’s expanding the NSX‘s color palette with a heritage-inspired hue named Long Beach Blue for the 2021 model year. The color was inaugurated during the 2002 model year by the first-generation NSX.

Shake the thoughts of the Pacific Ocean and its sandy beaches out of your head; the color is named after the Grand Prix of Long Beach, which Acura sponsors, not after a surfing spot. It joins other motorsport-themed colors, including Indy Yellow and Thermal Orange, and is a reformulated version of the first Long Beach Blue released some 18 years ago. It looks a little bit lighter than the color that inspired it, though it’s just as eye-catching.

It doesn’t sound as if Acura is making any major mechanical modifications to the NSX for 2021. Power still comes from a gasoline-electric hybrid drivetrain that consists of a twin-turbocharged 3.5-liter V6, a nine-speed dual-clutch automatic transmission, and three electric motors. The system’s total output checks in 573 horsepower and 476 pound-feet of torque, and the NSX reaches 60 mph from a stop in three seconds flat.

Acura will begin delivering the 2021 NSX in early 2021, and pricing starts at $159,145 once a mandatory $1,995 destination charge enters the equation. 130R White, Curva Red, and Berlina Black are the only colors included in the aforementioned price. Enthusiasts who want Long Beach Blue will need to pony up and extra $1,000 for it.

Acura offered the original Long Beach Blue from 2002 to 2005. It replaced Monaco Blue Pearl, which was offered in 2000 and in 2001, but buyers shunned it. Only 88 cars were ordered in Long Beach Blue, according to the company’s archives department, so it’s one of the rarest first-gen NSX colors. Time will tell if it’s more popular in the 2020s, or if it will be remembered as one of the rarest second-gen NSX colors, too.

2020-11-11
admin
Share
Previous What It’s Really Like Piloting Private Jets For The Rich And Famous
Next Match point Mir: can the resistance stage a final stand?

Ford Ranger Now Available Without a Pickup Bed In Europe, Just as Option Disappears from America

Video tells the design story behind the Nissan Z Proto

The Nissan Z Proto has excited enthusiasts with its skillful reimagining of the Z-car idea ...