What are the exterior changes on the 2020 Nexon?

The 2020 Tata Nexon facelift is quite extensive and there are a number of changes, especially at the front. It gets a new grille, a taller and flatter bonnet (which meets the latest pedestrian impact regulations), and sleeker headlights. C-shaped surrounds neatly box in the lower light cluster, and the integrated bull bar and a faux scuff plate make it look even more SUV-like. The tri-arrow pattern in the lower air intake is an interesting detail, and looks quite good, but is it a bit too Mercedes? 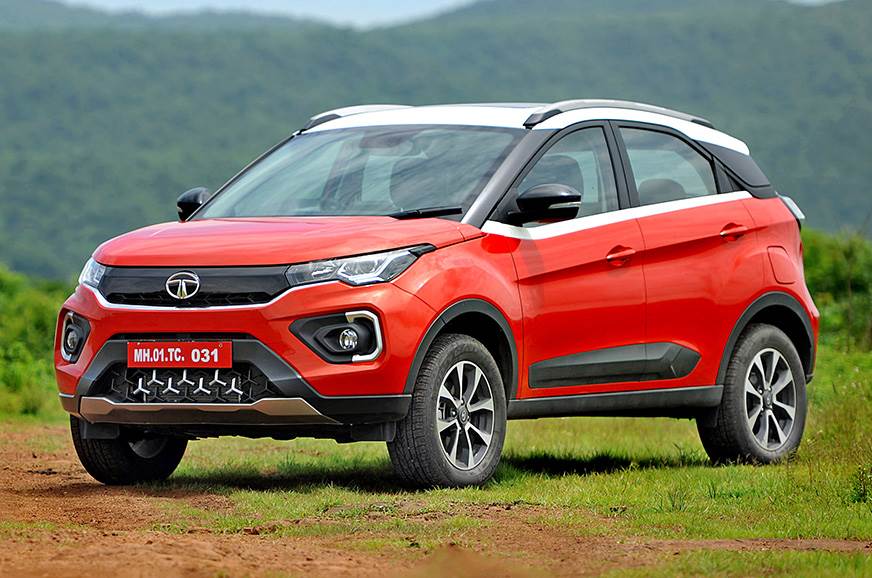 Missing on nose of the Nexon facelift, however, are the ‘ceramic’ highlights, a signature of the original car. These white strips do still feature at the base of the windows, defining the rising belt-line and, as earlier, running around the rear. The 2020 Tata Nexon also gets blackened C-pillars, to makes it look less coupe-like, the word ‘Nexon’ is now written across the rear in chrome, and the Union Jack-like tail-lights are an interesting design detail too. Also, in an effort to make it look wider, the Nexon facelift gets faux vents at the bottom of the rear bumper. 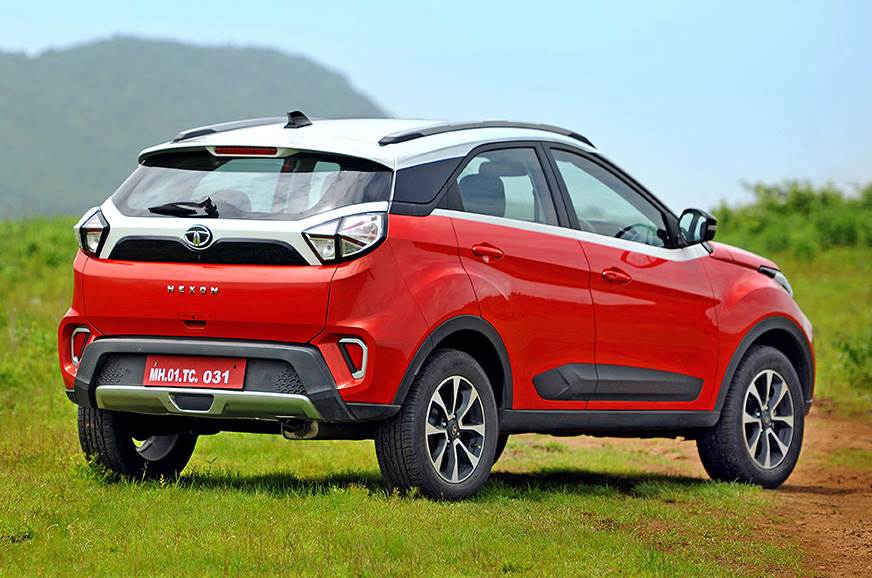 What engines does the new Tata Nexon get?

Tata’s best-selling SUV now also comes with an uprated 1.2-litre turbocharged petrol engine. The three-cylinder unit gets 10hp more, taking its maximum power up to 120hp, thanks to a few hardware and software upgrades. The new BS6 engine gets a new induction system, an uprated turbo, lowered friction levels and a new exhaust system. Tata Motors has also updated the 110hp 1.5-litre diesel engine to make it BS6-compliant. Both engines are available with 6-speed manual gearboxes or AMT automatics, and then there’s also the all-electric Tata Nexon EV. 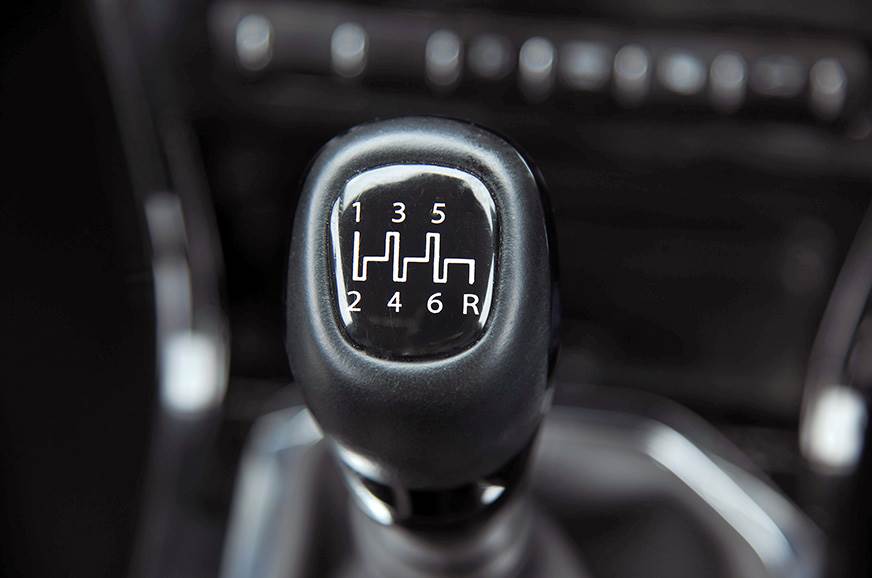 What are the interior changes to the Nexon facelift?

The 2020 Nexon’s cabin is more familiar. The design of the solid-looking dash, with the free-standing screen at the centre, is carried over, and with the neatly executed chrome-lined vents, it works well too. And the cool-looking glovebox release button that’s sunken into the dash is there too. 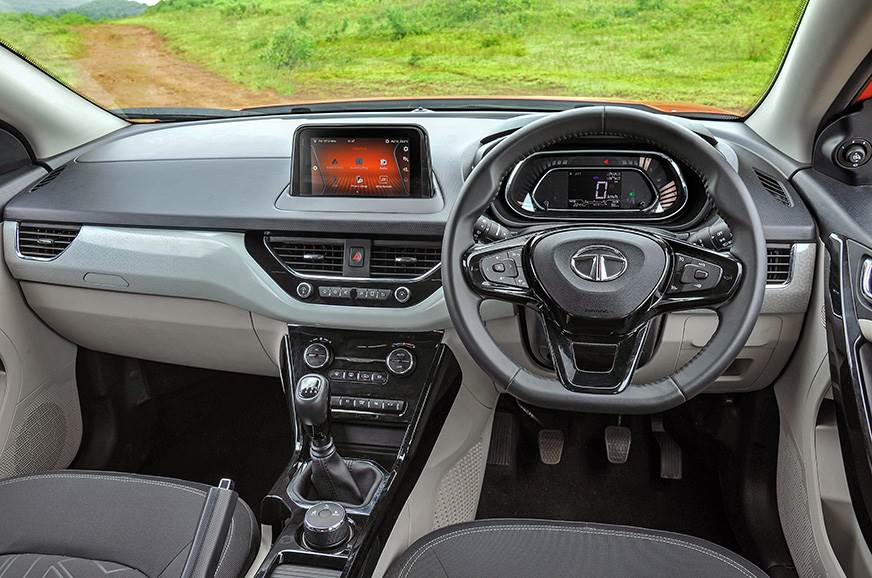 The sporty, flat-bottomed steering wheelis new,that tri-arrow pattern is also featured on the dash and the instrument panel is now a digital LCD panel – similar to what you get in the Tiago and Tigor, and not the colour screen setup you’ll find in the Nexon EV and Harrier. 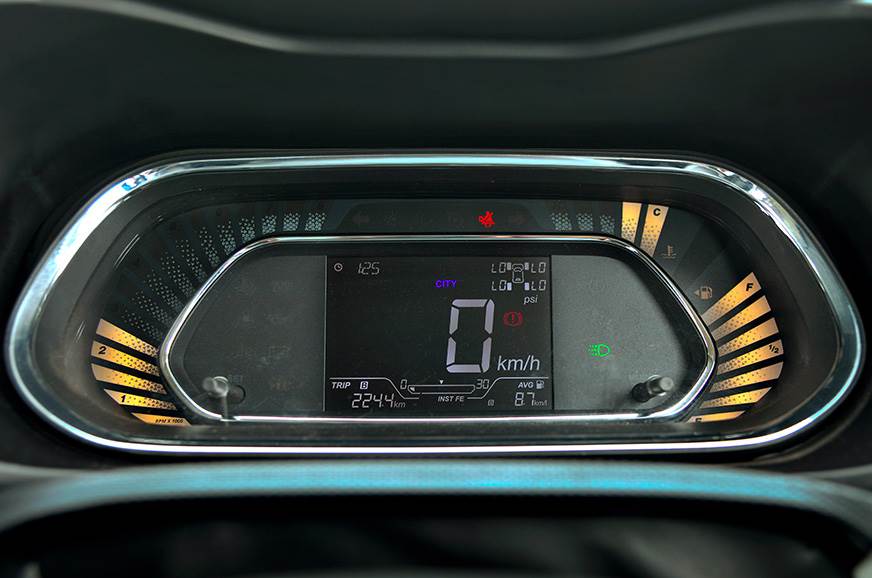 While the build of the dash feels tough and the small buttons function well, quality levels inside the elbow box and on the extended storage area ahead of it still don’t impress. There are plenty of exposed sharp edges and joints on the inside, the oversized ‘drive mode’ knob (borrowed from the Hexa) is too big, and with no traditional cup-holders and no flat surfaces large enough, there really is no secure place to put your phone. 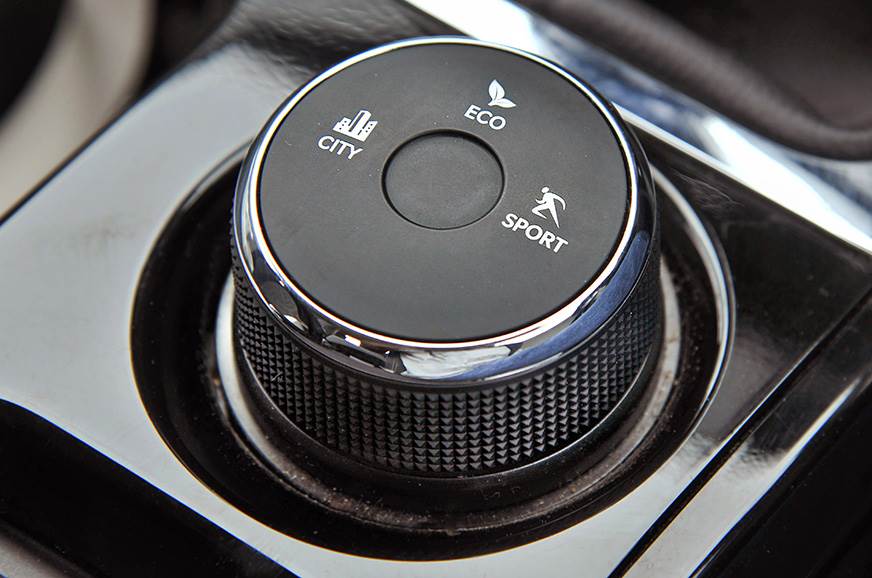 The shallow door-pockets with oddly inclined bottle holders can prove to be an ergonomic issue, but then the umbrella holders in the doors are a nice touch.

How is the Nexon on space, comfort and practicality?

The Nexon has always been a comfortable SUV to sit in, due, in part, to the space-efficient design and wide, roomy cabin. Up front, the seats are placed at a good height, they are wide and there’s a fair amount of space in the driver’s footwell. The new seats are also well finished (the tri-arrow pattern features here too), and what makes the cabin feel airy is the inclusion of the new sunroof. 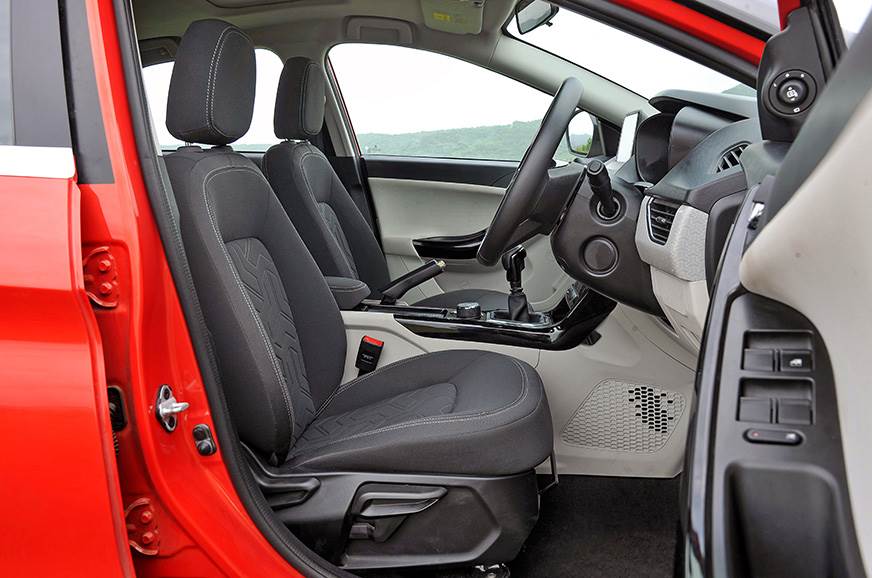 The arched window line at the rear means you need to duck a bit while getting in, but once you’re seated,there’s a fair amount of space here. Legroom is sufficient and better than many of its rivals, headroom is good for six-footers, despite the slight drop in the roof lining, and though the seat back has been reclined to help with headroom, it isn’t too laid back. 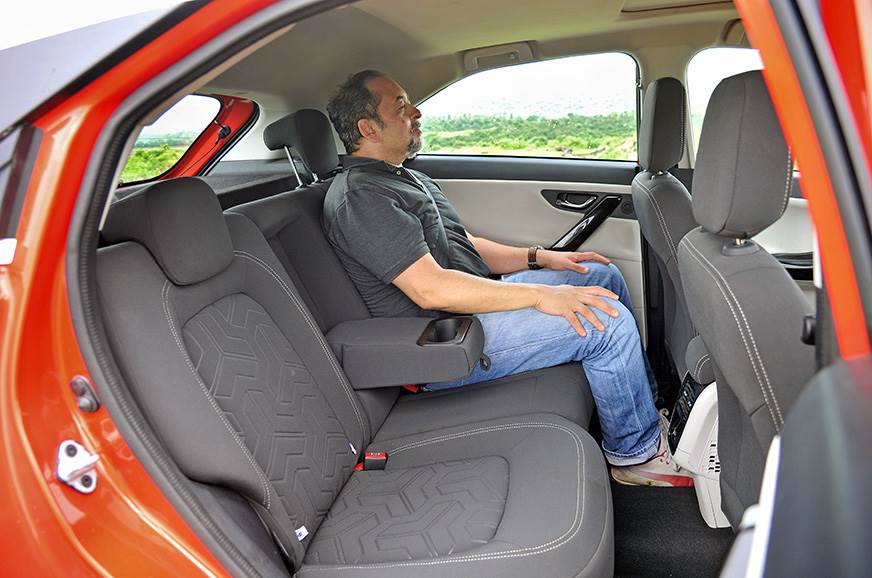 While there is a big vent to cool you in the rear, there are no USB ports to charge your phone; something Tata could have fixed. There is, however, a 12-volt socket on the parcel shelf behind you. Luggage space at the rear is a useful 350 litres, and you can fold the seats down If you need more.

What features do you get in the 2020 Tata Nexon?

New kit on includes new LED DRLs, both at the front and rear, ESP, traction control, roll-over mitigation and brake assist as standard, auto wipers, auto headlights and a tyre pressure monitoring system, which we never managed to reset despite repeated attempts. 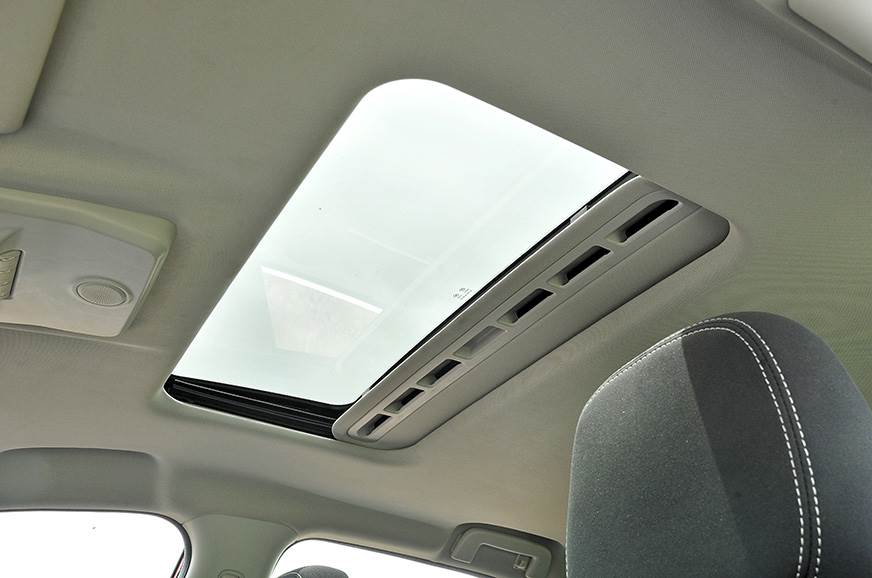 The 8-speaker Harman audio system stands out as something special. Clarity and punch are very impressive, and once you’ve set the equaliser, you can also play it at full volume, without distortion.

The new Nexon also gets Tata’s IRA connected car tech and included in the software suite is the ‘what3words’ navigational aid. We didn’t manage to test either, however, as the various systems weren’t activated. On the topic of infotainment, the both the instrument panel and the touch-screen need to be brighter; try and reverse on a bright day and it is genuinely difficult to see obstacles on the screen. 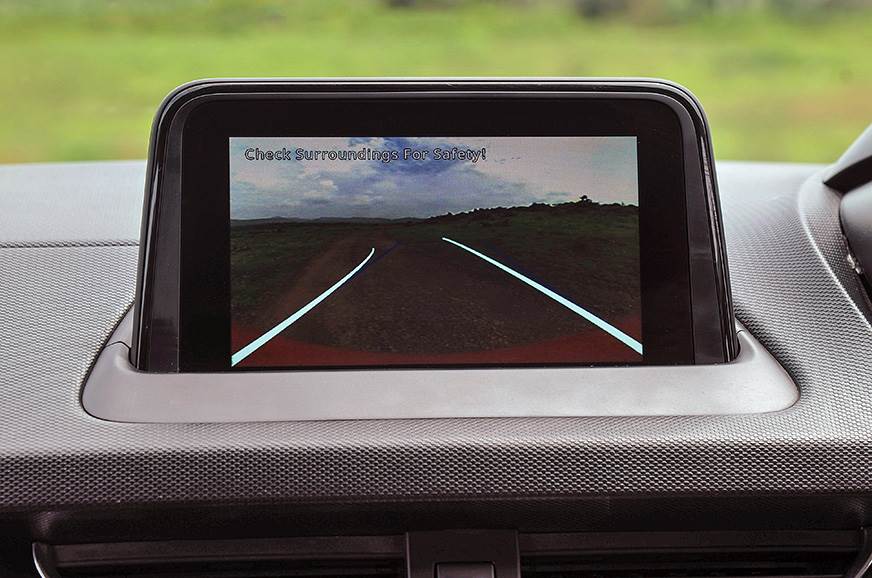 Another cool and unique feature is ‘Xpress Cool’ function for the AC, which drops the driver’s window to vent the hot air from the cabin for faster cooling. It then reminds you to put the window up, via a voice prompt, once the aircon gets upto speed. Neat. 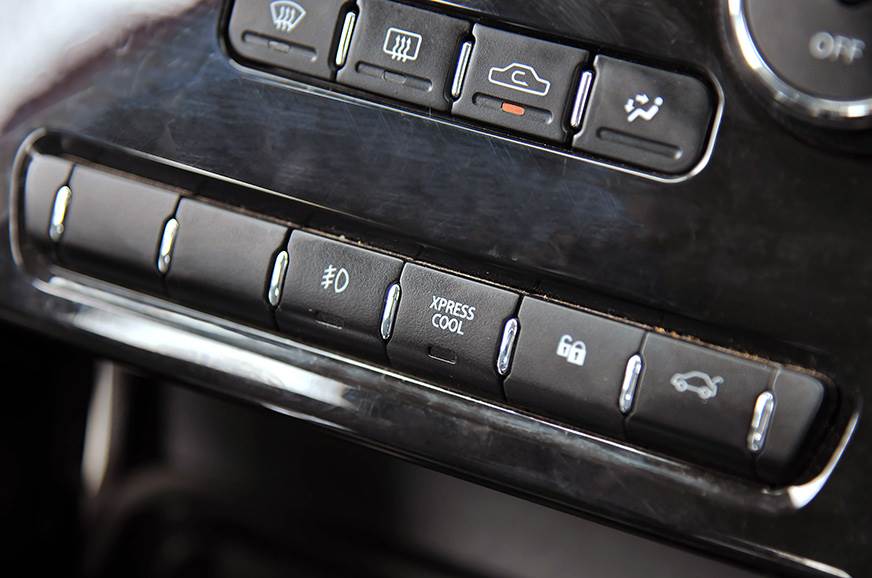 Tata’s 1.2 turbo-petrol may be a three-cylinder engine, but the only time you can really tell is when you fire it up and there’s a bit of a rocking motion at idle. Tap the throttle pedal and it immediately settles down, and as you pile on the revs, it feels even more refined. The new intake and exhaust manifolds mean theengine isn’t quite as throaty anymore, but it has a nice enough snarl at high revs. 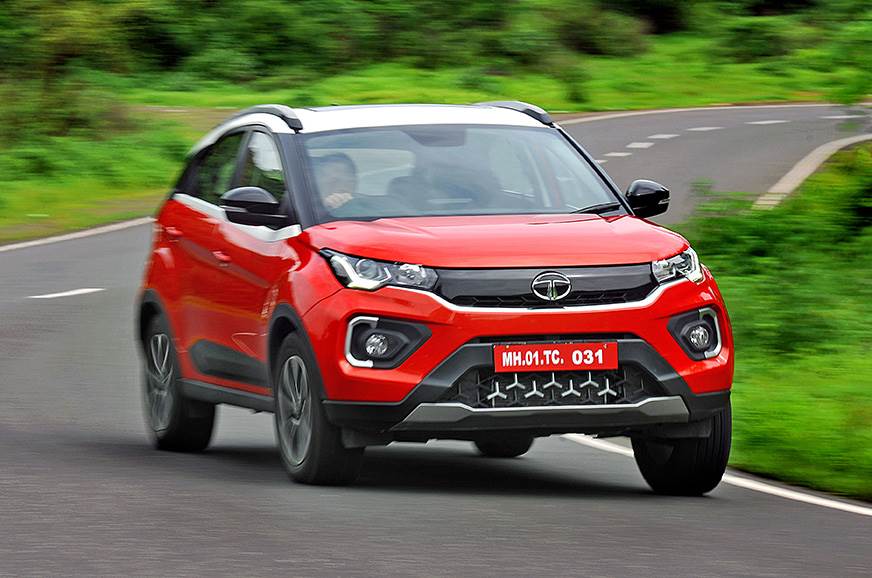 It’s at low revs that this engine has a few rough edges. No doubt, its smoother than before and has a broader torque spread, but though the power delivery is more progressive, it’s interrupted by distinct flat spots and a snatchy throttle response at low speeds. The engine has clearly been calibrated with fuel efficiency as a priority, judging by the abrupt ‘tip-in’ and ‘tip-out’for the fuelling.

This gearbox isn’t the slickest six-speed manual around either. Yes, it is light and you don’t need to exert too much effort, but the throws are long, the gear lever is a bit too tall, and the clutch is snappy, all of which conspire to make the Nexon not as cityfriendly as its rivals. 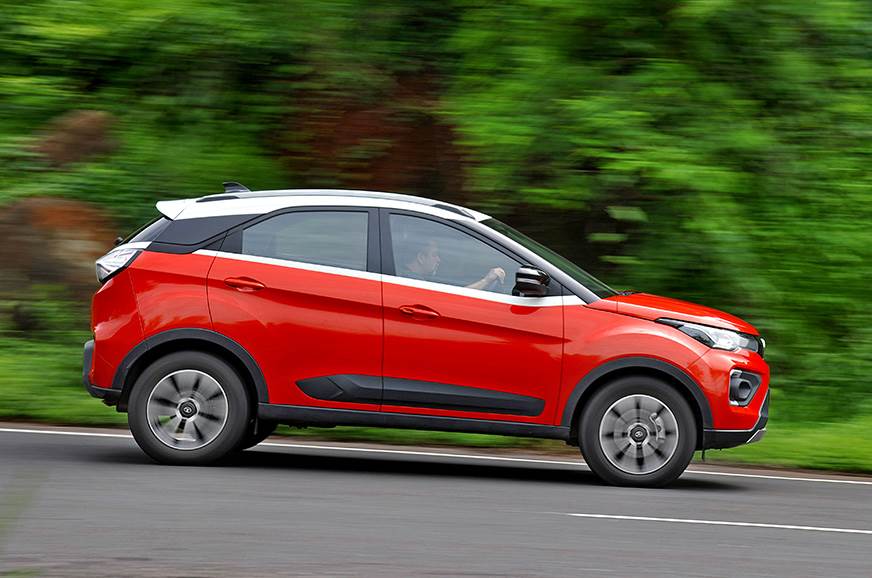 There’s also some amount of turbo lag. The new Nexon only really begins to really move once it has crossed 1,800-2,000rpm, so if you want sustained performance, you have to keep it above those revs. Unsurprisingly, it’s in the mid-range where this engine does its best work. Get past 2500rpm and there is a nice sustained shove, and keep your foot in and this carries on well past 5,500rpm.

While we did run the 2020 Nexon against the clock, we weren’t able to execute a quick launch,as the traction control kept cutting in and couldn’t be switched off. 0-100kph, as a result, came up in a rather pedestrian 13.0sec; not a representative time. Get past the initial launch, however, and the more powerful, 120hp Nexon has a bit of an edge over the earlier 110hp version; especially from 50kph onwards. Can you feel the additional 10 hp? Only if you pay attention, because the difference is marginal.

Tata has been installing drive modes on its cars for some time now, and we’re happy to report, all three appear well defined. Eco, unlike on earlier versions, is actually quite useable and not terminally frustrating, and Sport, true to form, does give you an extra kick.While the overall performance is more than acceptable, Tata’s BS6 petrol engine still lacksthe sophistication and capability of the new breed of turbo-petrols.

What is the 2020 Nexon’s suspension, ride and handling like?

Where the Tata Nexon excels is over broken roads. Stability on its stiff, tall springs is great, and this means you can carry a fair amount of speed over bad patches and gravel roadswithout really having to slow down. There is a hint of stiffness over regular roads, especially at low speeds, and some thuds do filter inover poorly paved sections. Still, up the speed and the Nexon rounds off most bumps nicely and even remains flat and stable with almost no bobbing or pitching. 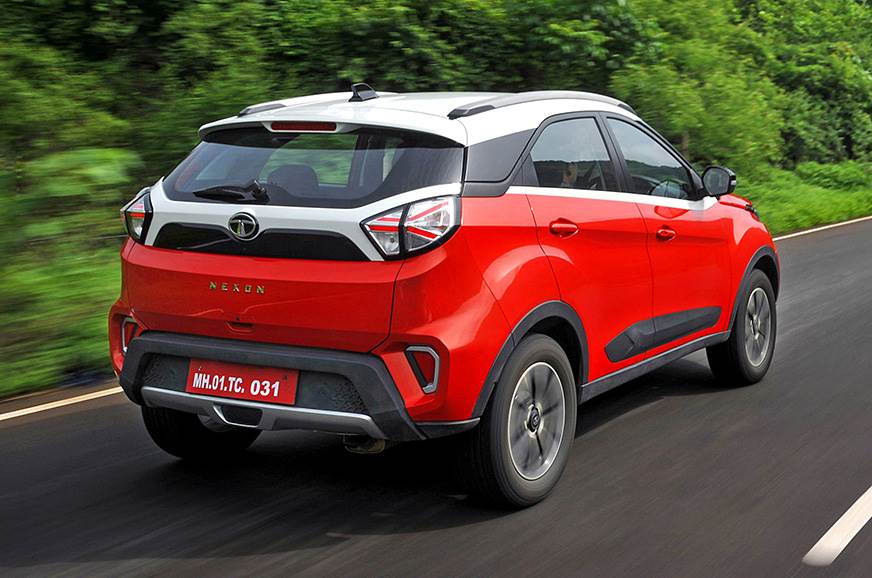 The slightly stiff setup also means the Nexon delivers plenty of confidence at high speed, especially in a straight line. What adds confidence is that the steering weighs up nicely and imparts a good amount of feel. In fact, the Nexon has the best steering feel in its class, even better than the Ford Ecosport, and that’s saying something.

While the Nexon isn’t a corner carver in the traditional sense, it still feels well balanced, is keen to turn in to corners and holds on stoically. Yes, there is a bit of body roll, which you would expect from such a heavy car, but the confidence the Nexon imparts encourages you to enjoy the road.

With its uprated engine, the 2020 Tata Nexon now feels marginally peppier and smoother than before, but the hesitant power delivery does affect low speed drivability. Quality has always been a moving target for Tata Motors and though the Nexon is much better built than it first was, the fit and finish still falls short of class standards. But there’s lots to like as well. 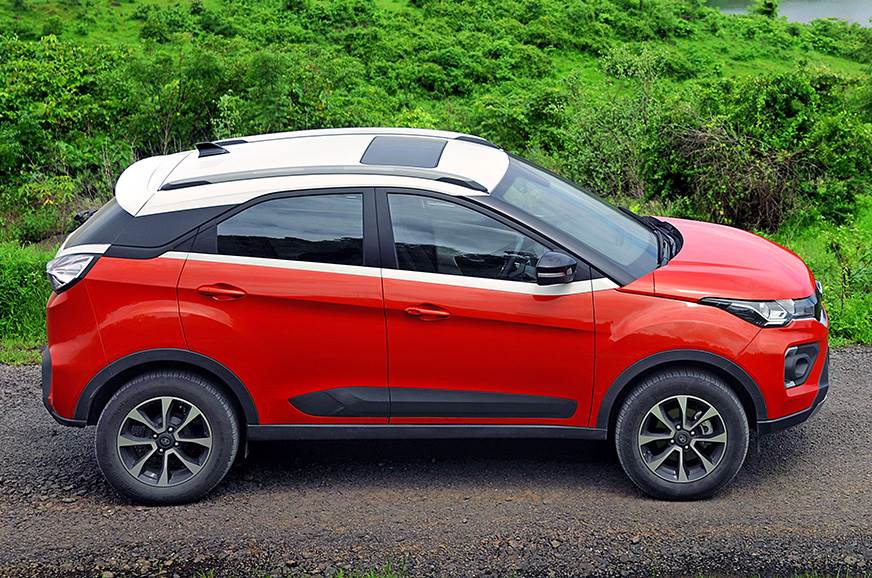 The beefy suspension does well in our conditions, it is remarkably spacious and comfortable, and with all the additional goodies and kit on offer, it now feels more upmarket too. Also, with Nexon prices ranging from Rs 6.95 to Rs 11.20 lakh for the petrol version, it is still terrific value for money.

It looks even better in its new avatar,so if you are among the many who just love the design and are looking for a tough, yet comfortable compact SUV that won’t break the bank, the new 2020 Tata Nexon should be high up on your shortlist.

After months of curbs and limited movement, my family was really looking forward to our ...