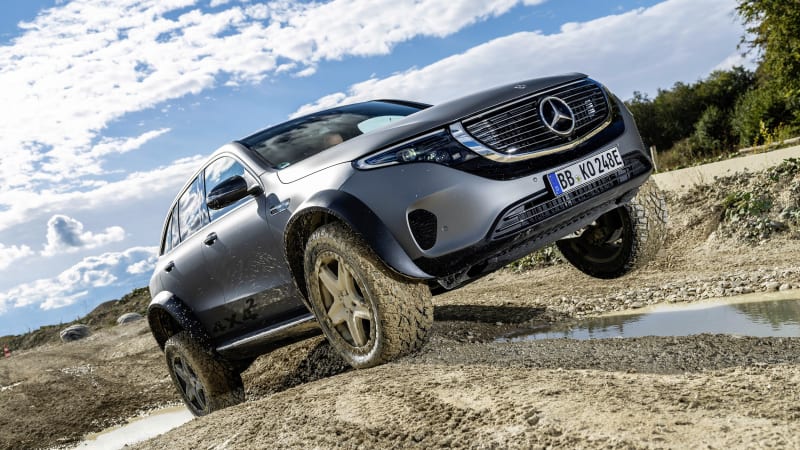 Mercedes-Benz dropped an EQC onto a pair of beefy portal axles to demonstrate what its electric technology is capable of off the beaten path. Badged 4×4², the concept is a glimpse at future battery-powered off-roaders.

Normally fitted to the planet’s most extreme off-roaders, like the Unimog, portal axles increase a vehicle’s ground clearance because their half-shafts are higher than the center of the wheel. Putting these mechanical hiking boots on the EQC more than doubles its ground clearance to 11.5 inches, which allows it to drive through 15 inches of water. For context, it normally sits 5.5 inches off the ground, and its fording depth checks in at 5.9 inches.

Adding inches between the EQC’s underbody and the ground also increases its approach and departure angles to 31.8 and 33 degrees, respectively. Mercedes pointed out an unmodified G-Class can deal with 28-degree angles in either direction, but it’s worth noting the G550 4×4² boasted figures of 51.6 and 47.4, respectively.

After it transformed its family-friendly soft-roader into a high-tech monster truck, Mercedes turned its attention to sound. According to the brand, the on-board acoustic production software analyzes different parameters (including the position of the accelerator pedal and the vehicle’s speed) to give the driver feedback on system availability and vehicle parking while emitting an interactive, emotionalizing driving sound. If you’re a pedestrian, you’ll be able to hear it coming thanks to noise emitted via external speakers integrated into the headlights.

It doesn’t sound like engineers made any major modifications to the EQC’s powertrain. If that’s the case, the 4×4² is powered by a pair of electric motors that draw electricity from an 80-kilowatt-hour lithium-ion battery pack to generate a combined output of 402 horsepower and 561 pound-feet of instant torque. We don’t know precisely what effect the portal axles (which are heavier than standard axles) and the chunky Cooper Zeon tires have on the model’s driving range, which is rated at 220 miles by the Environmental Protection Agency (EPA).

Mercedes-Benz hasn’t announced plans to turn the EQC 4×4² into a production model, and looking at its past projects doesn’t shed a lot of light on the matter. On one hand, it transformed the G500 4×4² concept unveiled in 2015 into one of the wildest factory-built off-roaders we’ve ever driven, and recent spy shots suggest the second-generation model will receive the same treatment sooner or later. On the other hand, the E-Class All-Terrain 4×4² created in 2017 by Jürgen Eberle, one of the carmaker’s engineers, remained a one-off model.

“We wanted to see how we can push electric vehicles to the limit; in this case, off-road capability. No production version is planned so far, but if there is great feedback … you never know,” a spokesperson told Autoblog.

What We Know About It

Porsche in August unveiled an updated Panamera that we’ll see in showrooms next spring as ...