The Redigo has been Datsun’s contender for competing in the entry-level hatchback segment against the likes of the Renault Kwid, Maruti Suzuki Alto and the S-Presso. Though the Japanese automaker has been keeping pace with constant feature additions to its budget offering, ever since its debut back in 2016, it has introduced a major facelift this time around, coinciding with the implementation of the latest safety and emissions regulations. The 2020 Datsun Redigo brings in sharper styling, more equipment, an updated set of powertrains and some structural upgrades as well.

While the previous model’s slick design had a more universal appeal, the facelift wears an aggressive look, especially up front, which will polarise opinions. The trademark Datsun grille is now a size or two larger and the bumper sports sharp cuts and creases. Slimmer headlights and prominent, L-shaped LED DRLs (replacing the horizontal units on the previous model) give the new Redigo a contemporary look. Datsun has also added LED fog lamps to the top-spec variant, which is a segment first feature. 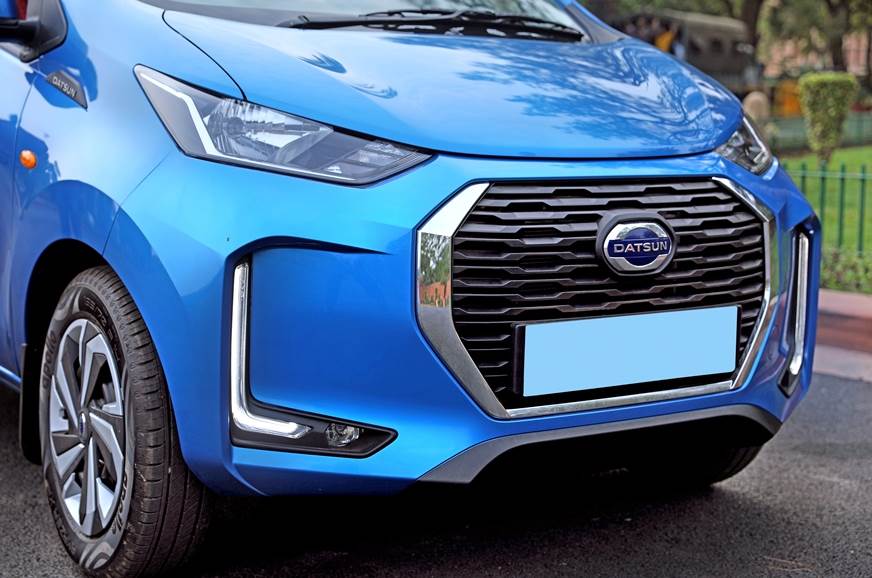 With the facelift, the Redigo maintains its basic profile and tall-boy proportions, and the standard 14-inch steel wheels with thicker 165/70 section rubber (compared to the 155/80 R13’s before) improve the overall stance. They also add 2mm to the already class-leading ground clearance (unladen) which now measures in at 187mm. Datsun badges on the front fenders, smart dual-tone wheel covers, and body-coloured wing mirrors are other elements distinguishing the Redigos old and new. The posterior is largely unchanged, save for the addition of an LED signature in the tail-lamps.

These cosmetic changes are accompanied by structural upgrades under the skin. The Redigo’s CMF-A underpinnings, which are shared with the Kwid, have been beefed up, in order to comply with the latest crash-test and pedestrian-protection norms.

The cabin is where the majority of the visual upgrades appear. Gone is the asymmetrical dashboard design of the previous model, and in comes a more traditional horizontal layout. The dark colour scheme, with a slab of silver textured plastic running across the width of the dashboard, gives the cabin a distinct appeal. Taking pride of place on the piano black-finished centre console, though, is the new 8.0-inch touchscreen infotainment system which, bundled with Apple CarPlay and Android Auto, is slick and easy to operate. 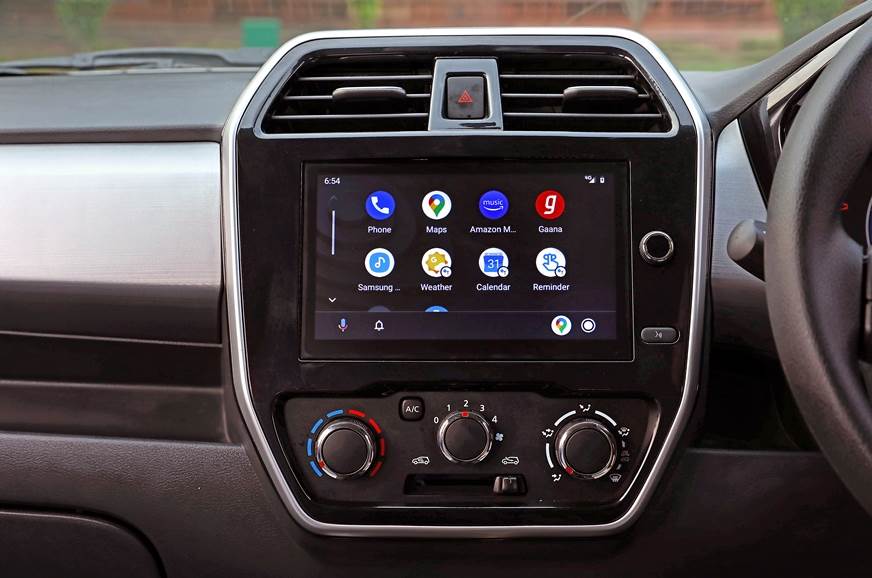 While the pre-facelift Redigo drew flak for exposed sheet metal on the inside door panels, Datsun has fixed that by providing full door cladding this time around. The black-grey textured upholstery is another premium touch.

Improvements aren’t simply aesthetic, as some ergonomic flaws have been rectified as well. The appallingly compact glovebox from the previous model has been replaced by a sizeable unit, wing mirrors are now internally adjustable, and the static reel seatbelts for outboard rear passengers from before have made way for retractable ones. Still, some quirks remain, like the single front wiper, though in all fairness, it does gain the added functionality of intermittent operation.

Despite the Redigo being the shortest car in the class and having the smallest wheelbase, cabin space is quite good. Knee room for rear passengers is sufficient and the tall-boy proportions liberate generous amounts of headroom. Seating three abreast at the back, however, will prove to be quite a pinch, given the narrow width of the cabin. 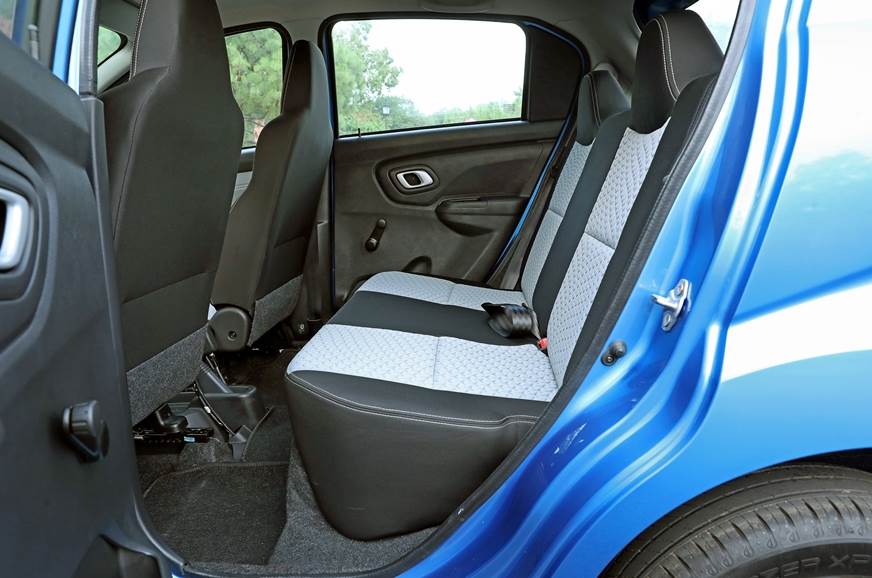 SPACED OUT – Knee room and headroom at the back are pretty good for a car of its class.

As before, the Redigo’s equipment list includes power steering, air conditioner, remote locking, front power windows, ABS, rear parking sensors and a driver’s side airbag. Though Datsun has added a passenger airbag on the top-spec trim, it has missed the opportunity of providing steering-mounted audio controls, like in the S-Presso, and rear power windows and armrest, like in the Kwid.

The Redigo continues to be powered by a 54hp, 0.8-litre petrol engine and a 68hp, 1.0-litre unit, albeit in BS6 guise. We drove the larger capacity petrol and found the driving manners to be largely similar to the pre-facelift model.

Start up the engine and the characteristic three-cylinder hum creeps into the cabin, though vibrations in the driving controls, like the steering, gear lever and pedals, remain well contained. Getting off the line requires a bit of an effort.  Step on the gas and there’s a definite step up in power after 2,000rpm, however, by the time the engine builds up speed to 3,500-4,000rpm, the thrummy three-cylinder hum becomes quite prominent, so it’s better to shift up early. The engine has enough pep to keep up with city traffic, but push any harder and it begins to feel strained.

The allied 5-speed manual transmission is quite notchy and slotting in the dog-leg reverse gear requires some effort, which could prove to be a bit tricky for new drivers. A narrow footwell also means that the left leg starts protesting on longer drives. The saving grace, then, is the light clutch, which redeems the Redigo’s city drivability.

CITY FRIENDLY – Steering is nice and light for city use, though the lack of a sufficient self-centring action marks it down.

Other factors that aid the Datsun’s urban manners are its compact footprint and a light steering. The lack of a sufficient self-centring action, however, marks the steering down. The brakes too have a sharp bite point, which takes some getting used to.

Though not uncomfortable, the suspension is set up a bit firm and you can feel the road surface. The high-set seating and large glasshouse provide a great view up front, but the thick C-pillars mar rear visibility. The rear view camera on the range topping version, then, proves an excellent aid while parking.

Should I buy one?

Datsun has launched the 2020 Redigo 0.8 in four trim levels – D, A, T and T(O) – priced from Rs 2.83-4.16 lakh. The Redigo 1.0 is available only in the range-topping T(O) variant and is pegged at Rs 4.44 lakh for the manual and Rs 4.77 lakh for the AMT automatic version. As such, the Redigo slightly undercuts similarly kitted out variants of the Alto, S-Presso and the Kwid.

While the previous model fell short on some counts, the facelift has come a long way – it is safer, gets sharper styling and packs in more kit with a fair few features, making it worth considering for budget hatchback buyers.

With the latest update, Datsun has definitely stepped up its game in the entry-level segment. However, as things turn out, so has the competition.

Mercedes A 200 sedan petrol and diesel price, features and review

Entry-level luxury is a tricky business. You have to deliver not just a luxury badge, ...